This commemoration had its origin in 1940, when Congress passed a joint resolution authorizing and requesting the President to issue annually a proclamation setting aside the third Sunday in May for the public recognition of all who had attained the status of American citizenship. The designation for this day was “I Am An American Day.”

In 1952 Congress repealed this joint resolution and passed a new law moving the date to September 17 to commemorate “the formation and signing, on September 17, 1787, of the Constitution of the United States.” The day was still designated as “Citizenship Day” and retained its original purpose of recognizing all those who had attained American citizenship. This law urged civil and educational authorities of states, counties, cities and towns to make plans for the proper observance of the day and “for the complete instruction of citizens in their responsibilities and opportunities as citizens of the United States and of the State and locality in which they reside.”

In 2004 under Senator Byrd’s urging, Congress changed the designation of this day to “Constitution Day and Citizenship Day” and added two new requirements in the commemoration of this Day. The first is that the head of every federal agency provide each employee with educational and training materials concerning the Constitution on September 17th. The second is that each educational institution which receives Federal funds should hold a program for students every September 17th.

Parchment is not leather, although they both start with the same basic material. Leather is achieved by a hide tanning process, involving tannin, while parchment is made with lime, a base:

Parchment is made by soaking an animal skin (usually from a goat, sheep or calf) in lime and then stretching it on a frame, scraping it to remove excess tissue and allowing it to dry under tension. During this process, the collagen of the skin is rearranged, but not chemically altered. The result is a material that is very smooth and hard, and also very sensitive to changes in humidity. Since it has been soaked in a solution with a high pH, it is basic.

Inks used in the late 18th Century were different from modern formulations. They were suited to the writing tools of the time, but would likely clog modern pens.

The US Constitution, like the Declaration of Independence and the Articles of Confederation – and virtually any other document of its era, was written in iron gall ink. It is a purple or brown-black ink made from iron salts, and tannins derived from vegetable sources – galls (found most commonly on oak trees) that are caused by chemicals injected by the larva of certain species of wasp.

Due to its solubility, iron gall ink can penetrate the surface of paper or parchment, making it very difficult to erase. In addition, it converts to a ferric ( Iron (III) )-tannate complex, which is darker (thus even easier to read with added contrast), and not soluble, which makes it excellent as an archival ink as it can’t be washed away.

So, we’re clear on the tan and black, or maybe brown-black. Now what about white and red? No, we are not off into symbolism, this is all quite literal. Ladies and gentlemen, may I present the U.S.S. Constitution: 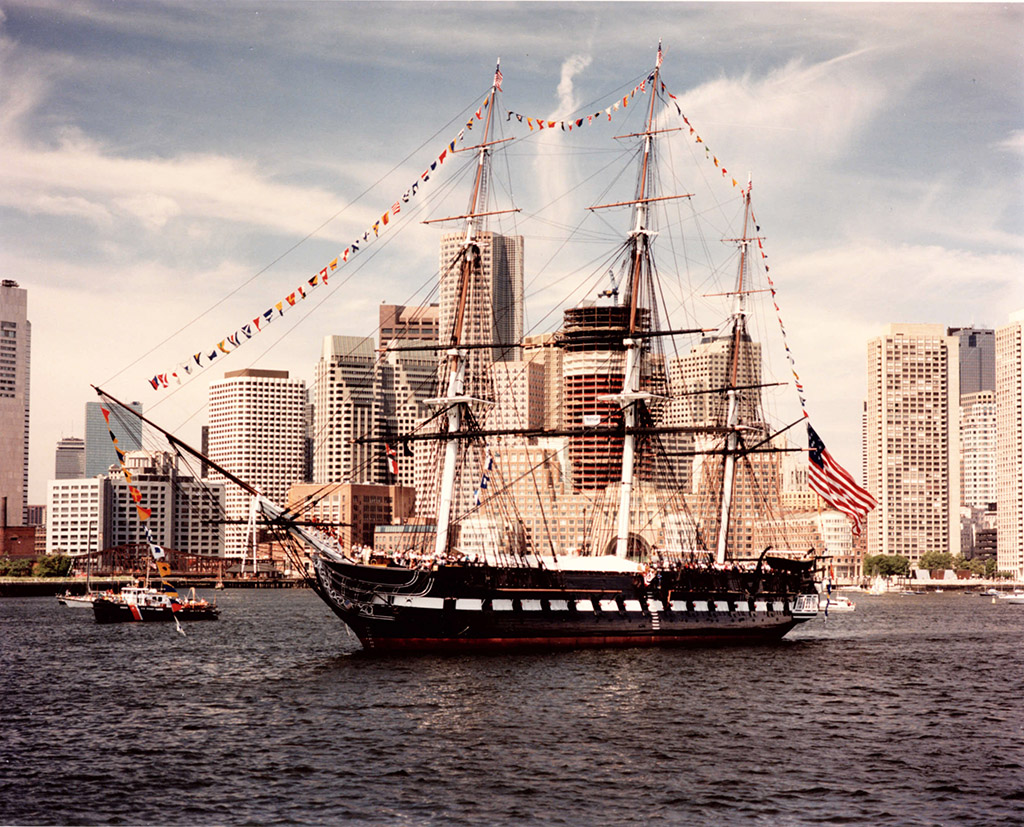 Notice the white stripe marking the line of the gun ports. Look carefully at the waterline; that is a red stripe, giving way to the natural wood color towards the keel. The Navy has a great video on the construction and history of what is now the oldest commissioned warship in the world. Like her namesake, the ship has undergone periodic repair. Unlike her namesake, the ship was never fundamentally altered, as was done with the Progressive amendments, making senators no longer accountable to state legislatures, and letting Congress reach into every worker’s paycheck to fund their ideas.

While the White House got the proclamations ready for President Trump’s signature several days in advance the first two years, they seem to have fallen down on the job in his third year, On the morning of September 17, the White House website was updated [emphasis added]:

Two hundred thirty-two years ago, the Framers of the Constitution met in Philadelphia and set our country on a bold course toward forming a more perfect Union. John Adams called the drafting of the Constitution “the greatest single effort of national deliberation that the world has ever seen,” and since its ratification, this exceptional document has remained the bedrock of the rule of law for our Nation. On this day and during this week, we celebrate the signing of the Constitution and the American citizens who have devoted their lives to implementing the Framers’ vision for the world’s grandest and most successful experiment in self-government.

The Founders understood that a self-governing republic requires a free and empowered citizenry. We are therefore grateful that our Constitution is designed, first and foremost, to secure liberty. Through a system of limited Government and checks and balances, the Constitution limits the ability of the State to become an obstacle to human flourishing, while simultaneously enabling the State to serve order, protect rights, and provide public goods.

Since taking office, I have nominated two Justices to the Supreme Court of the United States who have exhibited a proven commitment to the Constitution. I have also nominated and the Senate has confirmed 150 other Federal lower court judges who will faithfully interpret the Constitution and the laws of our Nation. With appropriate respect for the genius of the Framers and in accordance with the rule of law, our Nation’s Federal judges should always strive to interpret our laws, including our Constitution as written, regardless of any political or policy preferences they may hold in their capacity as citizens.

The drafters of our Constitution were committed not to a king or Government but to a belief in the promise of America as a free and prosperous society. To fulfill that promise, they designed a Government and a Constitution that could withstand the inevitable demagoguery, passions, and exigencies that would seek to unmake us as a people. And though the durability of our Constitution has been tested through crises and wars, it has endured. Today and throughout this week, we recognize the magnitude of the Constitution and the unparalleled success of the system of Government it helped create.

IN WITNESS WHEREOF, I have hereunto set my hand this
sixteenth day of September, in the year of our Lord two thousand nineteen, and of the Independence of the United States of America the two hundred and forty-fourth.