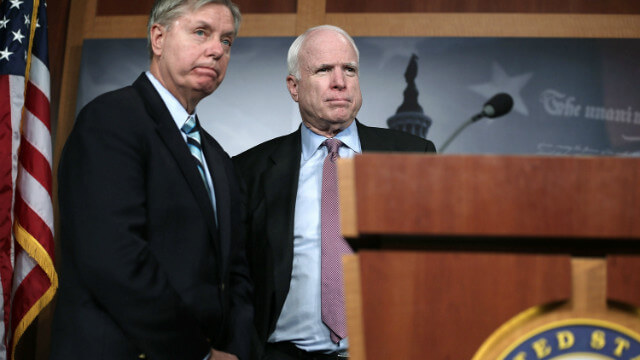 In the age old tradition of dinner before dalliance, John McCain and Lindsay Graham were treated to a quiet date night with Barack Obama last Wednesday, which is more foreplay than the rest of us get from the President as he proceeds to consummate his intentions on America in more ways than even Dr. Ruth can count.  “I’m assuming the president wants to talk seriously about the issues of the day,” cooed Senator Graham, innocently batting his rhetorical eyelashes with the preposterous addendum that, “I’m encouraged by the president’s outreach [and] I hope it bears fruit.”   Yes yes, and if only King Leonidas had announced his encouragement at the outreach of Xerxes toward Sparta, all that unpleasantness at Thermopylae might have been avoided too.

It bears reminding the contrast between the deference Senators McCain and Graham afford a President who is arguably the most hostile toward individual rights in recent history, and the scorn they heap on the heads of those who dare to question the persistent amassing of executive power.  Graham’s hopeful encouragement for fruit-bearing outreach from the President quickly gave way to scorn and the ridicule of Republicans who mounted an effective opposition to the President:

To my Republican colleagues, I don’t remember any of you coming down here suggesting that President Bush was going to kill anybody with a drone, do you?  They had a drone program back then, all of a sudden this drone program has gotten every Republican so spun up.  What are we up to here?

Answer:  President Bush wasn’t on record as hostile toward the Constitution and lamenting that it didn’t go far enough in enabling redistributive remedies.  President Bush didn’t unilaterally declare the Senate in recess in order to make unconstitutional recess appointments, and then proceed to ignore a Court of Appeals ruling that found his actions unconstitutional.  President Bush didn’t negate federal immigration law via executive fiat, nor announce his intention of going around the people’s representatives when they declined to enact pet provisions of his political agenda.  What we have, Senator, in case you haven’t noticed, is an executive who is at war with the Constitution and the individual.  What we are up to here, is the drawing of lines beyond which the President is not allowed to go.  I know, I know, Jeb Bush said he doesn’t want to draw lines in the sand, but a few of us recognize and celebrate the indispensable courage of those who drew such lines in 1776, and recognize that without similar fortitude today, what is left of our freedom will be compromised out of existence by those whose idea of success is to merely hop when the opposition says to jump.

Not to be outdone, John McCain (Maverick-AZ), said:

We’ve done, I think, a disservice to a lot of Americans by making them believe that somehow they’re in danger from their government.

Well, Senator, what conclusions would you prefer Americans to draw from a government whose Department of Homeland Security releases illegal aliens into the general population in advance of budgetary sequestration, but somehow finds the money to purchase over 2,700 Mine Resistant Armored Protection vehicles for domestic use in addition to some 1.6 billion rounds of ammunition?  Speaking of which, what are we to make of United States Senators who negotiate comprehensive immigration reform with a President who opens prison cells and releases criminal illegals into our midst?   I submit that it’s the federal government that has gone “maverick,” and the senator who has gone native.

To turn the Senator’s statement around for a moment, does the government believe it is somehow in danger from its citizens?  Why all the ammo and armor for domestic agencies?  Who among us is comfortable with Department of Education SWAT teams?  Who among us, on the left or the right, is comfortable with the Federal Aviation Administration’s forecast of as many as 30,000 aerial drones spying down on Americans by the year 2020?  Why, according to the Washington Times, is Homeland Security, “…dolling out millions in cash grants to encourage small-town cops to buy drones, whether they serve a purpose or not?”   Do we have a government or does the government have us?   Human nature, after all, remains unchanged and the propensity of some to expand their sphere of control over others is as alive today as it was when the Bill of Rights was penned.

All the same, having failed to attain the appropriate level of sneer, Senator McCain went on the following day to lament that, “…it’s always the wacko birds on right and left that get the media megaphone.”  The hypocrisy is breathtaking given the danger that awaits anyone who dares stand between between Senators McCain or Graham and the nearest microphone.  But notice please the yawning chasm between “wacko birds” on one hand, and being, “encouraged by the president’s outreach” on the other.  It’s a repeating phenomena wherein the nominal opposition employs its harshest language not against the statist, but rather against their own side, and the routine is getting old.

On the specifics, Senator Paul’s question was simple and straightforward, and could have been easily answered by the Attorney General had he chosen to do so.  Asked if the Constitution permitted the President to kill Americans, on American soil, who do not pose an imminent threat, Eric Holder chose instead to be coy. “As members of this administration have previously indicated, the US government has not carried out drone strikes in the United States and has no intention of doing so,” wrote the Attorney General, thereby addressing the plausibility of such action, rather than the legality.  That answer, coming from an administration that continues to usurp power and authority from the other branches of government, as well as states and individuals, generated more fog than light.

It was this fog that Senator Paul sought to pierce, in the process galvanizing conservatives and libertarians behind such core principles as the freedom of the individual against the assertions of the state. With previous administrations, the issue might never have arisen.  From this administration, however, the issue struck a chord that resonated across party lines.  Suddenly, the much vaunted “big tent,” seemed indeed to become bigger as one man, standing in defiance of the state, was soon joined by others in the Senate and across the country.  There are limits to state power, the Senator said, as he began illuminating those limits and reminding those in power that in America it is the people who remain sovereign, not the government.

That it was this inspiring demonstration of Constitutional fidelity that prompted two dyspeptic men, who appear joined at the microphone, to register unseemly and ugly assaults against Rand Paul and those who assisted him speaks to another problem, — namely, the tendency of weak-kneed Republicans to enable the worst instincts and behavior of the left.  With his approval polls drooping, the President needed to make a bi-partisan gesture of some sort toward Republicans to serve as cover when, inevitably, he refuses to suppress his redistributive appetites.  Senators McCain and Graham enabled him in that endeavor, and even went so far as to relieve him of the burden of attacking other Republicans who make disquieting noises about liberty and the Constitution.   That must have been one hell of a dinner.

John McCain’s military service is appropriately lauded.  His honor under the duress of captivity was exemplary and heroic, and will serve as a text book example of valor and service.  But from the McCain Feingold Act’s encroachments on the 1st Amendment, to his steadfast refusal to take the fight to a collectivist community organizer from Chicago which gave us the continuing disaster that is the Obama Presidency, to his consistent habit of chopping the legs off of those on his side of the aisle, one is left with the inevitable conclusion that the time has come to hand the banner of freedom over to those who are actually willing and able to advance it.  It’s time for the Senator to go home.  Hopefully, he will be kind enough to take his sorority sister from South Carolina with him.