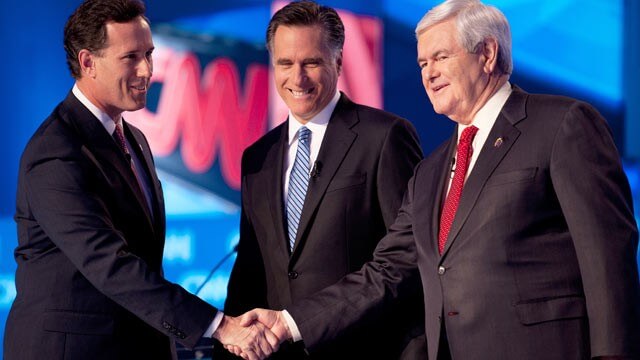 From Joshua Green at Bloomberg:

It’s one of the great untold stories of the 2012 presidential campaign, a tale of ego and intrigue that nearly upended the Republican primary contest and might even have produced a different nominee.

As Mitt Romney struggled in the weeks leading up to the Michigan primary, Newt Gingrich and Rick Santorum almost agreed to form a joint “Unity Ticket” to consolidate conservatives support and topple Romney.

“We were close,” former Representative Bob Walker, a Gingrich ally, said. “Everybody thought there was an opportunity.”

“It would have sent shock waves through the establishment and the Romney campaign,” said John Brabender, Santorum’s chief strategist.

The negotiations collapsed in acrimony because Gingrich and Santorum could not agree on who would get to be president, as reported by Bloomberg Businessweek.com.

“In the end,” Gingrich said, “it was just too hard to negotiate.”

I’m not sure that “almost agreed” is the correct terminology when the stumbling block was who was on top of the ticket. That’s like saying that you “almost” started a business, but couldn’t decide what you were going to sell.

That being said, I’m curious as to how many of the Ricochetti would have backed this unity ticket as an alternative to Romney.

What do you think? Could it have successfully consolidated the anti-Romney energy in the primaries? Would you have supported them? If they had secured the nomination, how would it have played out in the general election?