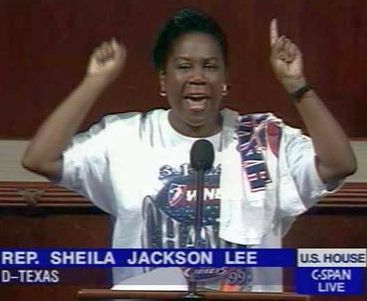 I generally roll my eyes when partisans of either stripe threaten to leave the country if a presidential election doesn’t go their way or a certain law gets passed. This, however, might get me to the point of a one-way plane ticket. From the Washington Times:

A letter dated July 25 and signed by Rep. Marcia Fudge, Ohio Democrat and caucus chairwoman, urges President Obama to consider Miss Jackson Lee for the position, calling the Democrat a “voice of reason” that the agency could stand to gain, the Houston Chronicle reported.

This is the same “voice of reason,” you’ll recall, who suggested that George Zimmerman broke his own nose, contended that the Tea Party was basically the Klan without robes, doesn’t seem to know that Vietnam is a single country, and believes that we put astronauts on Mars. I have no problem with crazy. But crazy needs to know it’s crazy.

In case you’re wondering what kind of Secretary she would be, her management of her House office may be instructive. As noted by the Houston Chronicle:

An average of 53 percent — more than half — of Jackson Lee’s staff — leave her office every year … one year, all but six of 23 staffers left.