My hometown of Birmingham in the United Kingdom has been rent for weeks by parental demonstrations against a new “Sex and Relationship” education mandate for primary (elementary) school children, and things are getting rather heated. Parents are objecting to the fact that, although they can request that their children not be taught the “Sex” part of the classes, they cannot remove their children from the “Relationship” part. That the “Relationship” part covers relationships between same-sex couples, which the parents find inimical to their core beliefs.

Fairly restrained coverage can be found in The Telegraph, but The Guardian has the photo that’s worth a thousand words (full disclosure: my family never read The Guardian. We only read The Telegraph. After a servant had ironed it, of course): 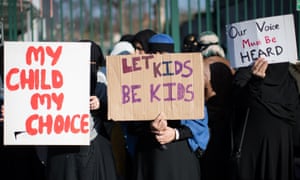 Member of Parliament Angela Eagle is overcome by what her country has come to, and has made a tearful plea in the House of Commons that Britain not go back to a time when LGBT people such as herself had to live in fear and be ashamed, and she criticizes the “reactionaries” who want to take Britain back to those times:

How weak, pathetic, and uncertain, she sounds, and as if she thinks no-one could possibly have anticipated this.

From The Telegraph article: “Amanda Spielman, the head of Ofsted [the Office for Standards in Education], has previously stated her support of schools running the “No Outsiders” course, adding that parents need to learn that “we don’t all get our way”. (emphasis added)

You’ve got a tiger by the tail, my dear. Best of British Luck.