Enter the ad men. Here, in a series of one line slogans, is the history of our efforts to build and sustain a larger professional Army, starting in 1971:

These three slogans map the decade-long struggle to find the right message. Recruiters had to both solicit a large number of applicants for a large number of positions, and attract the right applicants. The Army needed people who would embrace the Army way for at least several years, the time needed to train and fully integrate professional soldiers.

You can see the start point was an Army desperate to overcome the old image of dragooning men into short term, involuntary service. That first pitch fell flat, leading to the correction in tone, suggesting that the Army was a great community that you should desire to join. “This is the Army” was about narratives in images inspiring young people, still almost exclusively men, to join an attractive organization.

All the recruiting slogans and Madison Avenue wizardry could not, in the long run, overcome the message of neglect from Congress allowing equipment to age. With the great infusion of new generation equipment, in the Reagan buildup, came a new wave of messages to potential recruits, their families, and communities.

This slogan, and its earworm jingle, was so successful that it was rated the number two jingle in the 20th Century by Ad Age. Inside the long “Be All You Can Be” campaign, a subordinate message was very popular with the troops: “we do more before 9 am than most people do in a day.”

With our victory in the Cold War, there was a slight turning back to the idea of a peace dividend and a significantly smaller professional military. In that context, nine months before 9/11, a new slogan was launched:

This slogan was hooted at by soldiers. After all, in its plain sense, it contradicts Army culture. You most certainly were not going to get to be your own special self, unless “your own special self” conformed to the big Green Machine. All military entry training is about transforming recruits, so the slogan became an instant joke. Nevertheless, it was allowed to linger until 2006. Finally, common sense prevailed.

Here, the message is about individuals gaining power, growing in strength, through membership in the Army. Yet, “Army Strong” does not come close to the message power of “Be All You Can Be.” Whatever the ad slogan, people were making up their minds and volunteering in the near certain knowledge that they would be sent in harms’ way. Now, as we experience a lull in the long war, the powers that be have rolled out a new Army recruiting pitch to Generation Z, the generation after the Millennials (Gen Y):

This aligns with what desirable recruits are expecting, based on the past 18 years experience. Aligning with this slogan, the Army announced, and started enforcing, tougher physical qualification tests. The challenge will be for small unit leaders, backed by Big Army, to carry through on the promise of meaningful, challenging training, to not have “Warriors Wanted” become a cynical joke for the troops.

This matters to you because the Army has been, and always will be, the largest land force, the 800-pound guerilla facing both large predator states and guerrillas. It is simultaneously truth that the Army vitally depends on the other services and that the other services cannot impose our nation’s will for long against significant armed land opposition without Army involvement.

So, the Army Birthday is worth celebrating. On this occasion, currently serving members and veterans gather and sing the Army Song. Each of our armed services has a good organizational song, fitting each service’s culture. A 2006 article, “Army recruiting messages help keep Army rolling along,” evoked the Army’s theme song: “The Army Keeps Rolling Along.”

Wait, that can’t be right. The song goes: “the caissons keep rolling along.” Well, yes and no. Yes, the original song was an unofficial official theme for the Army. Caissons are the ammunition carriers of the horse-drawn era. The lyrics paint a picture of actual drills, maneuvers or “plays” that would be called to move and position artillery during a battle. The score is a bouncy tune, calling to mind the pre-pneumatic tires and shocks wagon experience. Listen to a recording of “The Caissons Go Rolling Along” and the picture above comes into new focus.

“The Caissons Go Rolling Along.”

Refrain:
Then it’s hi! hi! hee!
In the field artillery,
Shout out your numbers loud and strong,
For where e’er you go,
You will always know
That those caissons go rolling along.

The traditional Army culture was dominated by infantry and artillery, before the mechanized era of armor. Indeed, infantry is still at the center of the Army identity, the “Queen of Battle.” Artillerists have long cited Frederick the Great:

Artillery adds dignity to what would otherwise be a vulgar brawl.

The truth, of course, is dependent on your perspective. More precisely, it depends on which end of the gun tube you are facing. This classic George Finley caricature, frequently seen as a framed print in officers’ homes or offices, shows both sides: 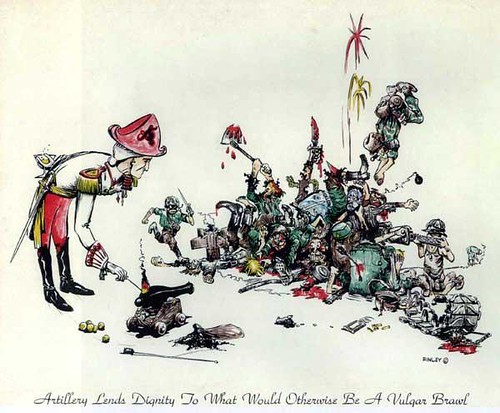 It was, perhaps, inevitable that the brass would mess with tradition. The caissons gave way to “the Army.” But why is the Army “rolling” instead of “marching” along? Well, to quote the mechanized infantry:

Why march when you can ride?

So, those of us who celebrate today will sing:

Refrain: Then it’s Hi! Hi! Hey!
The Army’s on its way.
Count off the cadence loud and strong (TWO! THREE!)
For where e’er we go,
You will always know
That The Army Goes Rolling Along.

Yes, this omits the awkward introduction added in 2013 that some senior sort added for a bullet on his or her resume. Yes, there are two more sort of clunky verses. But, brevity is best, and one verse with a refrain tells the story best. Naturally, a June 14th birthday boy also wished the Army a happy birthday:

Presidential Message on the 244th Birthday of the United States Army
Issued on: June 14, 2019

As Commander in Chief, I am pleased to join our grateful Nation in celebrating the 244th birthday of the United States Army.

For nearly two and a half centuries, the United States Army has been synonymous with duty, honor, and discipline. As part of the most elite fighting force the world has ever seen, our soldiers fiercely defend our national security at home and abroad. From the Revolutionary War to the wars in Iraq and Afghanistan, the United States Army has been instrumental in ensuring that America remains a shining beacon of hope and freedom around the world.

Last week, we commemorated the 75th anniversary of D-Day. The United States Army’s role was paramount to the success of Operation Overlord on that day and our subsequent victory in the European Theatre of World War II. Seventy-five years later, the men and women of the United States Army continue to fearlessly execute their roles as the guardians of freedom. Today, we commend our brave soldiers, both past and present, for their steadfast resolve, their vigilant defense of the values we hold dear, and their love of country.

May God watch over all the men and women of our Armed Forces and their families, and may He continue to bless the United States of America.

Why, thank you, Mr. President, and a happy birthday to you as well! May you and America’s Army prosper for many more years, and may our flag fly over a free people living in a land of ordered liberty for many more seasons! Let the Army go rolling along under that grand old flag.

As the China Monster approached, our best and brightest kept their eye fixed on Strawman Hitler
11 Likes· James Gawron