I meant to post this on June 5, the 30th anniversary of this event.

On the night of June 3-4, 1989, the China People’s Liberation Army moved to end the non-violent democracy protests that had for several weeks rocked several Chinese cities, most prominently at Tiananmen Square in Beijing. That night, hundreds and perhaps thousands of civilians were killed and the demonstrations crushed.

On the morning of June 5, on Chang’an Avenue just outside Tiananmen, a major street that I first visited in 2000, the confrontation that most Westerners remember took place, creating the indelible image of the event. A man carrying two shopping bags and whose identity remains unknown twenty-five years later placed himself in the middle of the road and for several moments blocked a long parade of tanks. That incredibly brave (the massacre had already occurred so he knew what the military was capable of) and solitary man remains the symbol, not just of what happened at Tiananmen, but of every person who has had the courage to stand and risk their lives against oppression and that is why the image endures.

Twenty-five years later he is known only as Tank Man. A Google search on “Tank Man Tiananmen” gives 7.5 million results and Wikipedia has a Tank Man article but his name and fate remain a mystery.

Below is a wider shot (also from Wikipedia) showing the entire column of tanks (Tiananmen is in the upper left and center of the photo) and Tank Man is in the lower left. 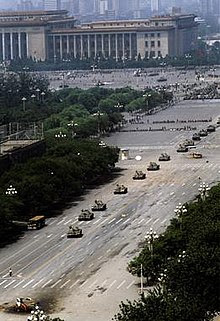 The video below shows more of the confrontation. The tanks try to maneuver around Tank Man but he moves to block them and then, amazingly, climbs onto the lead tank and speaks with one of the crew members. The video ends with him being hustled off of the street by bystanders. Even that last event is shrouded in mystery – some observers say it was the State Security Police that hustled him off, others that it was concerned bystanders, friends, or other protesters trying to save his life.

The Chinese government maintains it does not know who he is or what happened to him. Is he alive? Dead? Imprisoned? Is he still at large in China? Did he escape the country? The images and videos linked here are all blocked in China and knowledge about what happened in Tiananmen in 1989, including the existence of Tank Man, is limited within the country. I only hope the day comes when there is a Chinese government that tells what it knows about the identity of Tank Man or when he or those who know him feel free to disclose his identity.