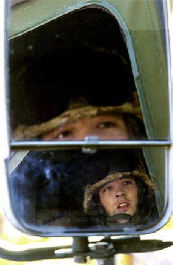 We lost six snipers the other day. The circumstances behind their deaths are still being examined and I’m not sure what is classified, all I can say is that we were all stunned. Then the next day a bomb blew up an amphibious tractor and killed fourteen Marines and one Iraqi interpreter.

All these men were good men, and men that will be missed. I worked closely with one of them many times since we’ve been in Iraq, the rest I didn’t know well. I was in Camp Hit chatting with my wife on the internet when word came to shut down the network. We were in “River City,” the code word we use whenever an American in our regiment is killed. We shut down the internet and phones until their families are informed. It’s a nuisance, but I haven’t yet heard a single Marine complain or try to get around this rule. Everyone understands why.

Then came the word that fifteen were dead. Foolishly, someone said that “we’re trying to keep the number of people killed from being spread around.” I don’t know whom they were kidding, but even as a staff officer it was difficult for me to get the details of what happened.

That night I left Camp Hit and returned to the dam. Only then did I learn the names of the men killed. Most were from Lima Company and I didn’t know them well, but when I heard one name I was shaken to the core. This is my semblance of a eulogy for him. I will miss him a lot.

His name was Sgt Harper. He was one of the best. Tall, good looking, wonderful personality. Gentle, professional. He and his crew were the best small unit I’ve ever seen in the Marines. When we were in enemy territory we often set up in a building, they didn’t have much to do because their trac was the combat operations center and didn’t move once we set it in place for the day. Instead of wasting time, they taught each other classes, any classes. Music theory, math, bible studies, police procedures, whatever one of them had any knowledge of. They had a rule that no matter what was taught, it had to be treated seriously and all had to attend and be polite. I enjoyed watching their classes.

He was once part of 3/25 and was a radioman. But he lived in Virginia so he left the battalion and joined 4th AAV Battalion, whose Company A was in Little Creek, Virginia. By coincidence, that company has been attached to us over here in Iraq. He knew all the comm Marines here and they kept raving to me what a great guy he is.

You’d never meet a more pleasant man. I remember when I first met him, I mistook his gentle professionalism for something else. He was too good to believe. His offers to help, his friendly conversation, his concern for others seemed too good and had to be fake. But it was true, and I soon regretted my initial aloofness towards him. After working with him for these past months I learned just how great a man he was.

Out in the field, or back in garrison, he and his running mate, Sgt Hixon, were first to get things done and got them done right and they always helped out more than their fair share. They ran the tractor that is configured as a command and control vehicle, so I was their primary customer. I had them set their vehicle up the way I wanted to support the ops officer. They took on every challenge with a cheerful smile and helpful suggestions and never once did I have to wonder if their work was done. It was beyond comprehension that they wouldn’t do it better than requested, and I asked for a lot. They demanded the highest standards from their crew, and they were inseparable.

I need to find his wife’s address and write her a letter. She needs to know that everyone else that met him knew what kind of man he was, and I for one am very hurt that he is gone now.