The radios weren’t lost, we knew exactly where they were and they were in US custody, but there was still a lot of paperwork to declare them lost and then somehow find replacements. They weren’t lost, they may even have worked, there was no way to know. The problem is that they were now radioactive. As was the rest of the tank.

It’s ironic that the most dangerous weapon on the battlefield is the safest place to be. Inside the iron tank, the crew are safe. Tankers are fearless, nothing will hurt them unless they get out of the tank. 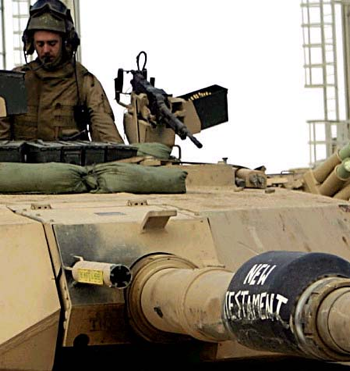 A double or triple stacked anti-tank mine, with a few artillery shells lay waiting for who knows how long. It was the dust storm season, the sand had a consistency of talcum powder, we called it “moon dust.” Foot steps and vehicle tracks tended to be obscured by the strong winds. Most objects, including mines and artillery shells were invisible.

The tank crew didn’t see the bombs and rolled right over them.

US tanks are brilliant designs, they may not be invulnerable but the crew almost always survives.

The crew got out safely. They had their bells rung, but they were generally fine. The other tank crew called on the radio for help and stood guard while they watched the breached tank hull cook off its ammo and melt.

The iron melted, but the crew was safe.

Help came, the mobile action platoon came to carry the tankers home. They must have felt great relief at this deliverance from the hell they just survived. The sun had set, Marines own the night, they were safe. Just a quick ride home, and then they would tell the story to all their friends of how they survived the bomb.

A mobile action platoon has four vehicles, one is typically a “high back” with an open cargo bay and thin armored sides. The tankers and some of the MAP crew climbed into the high back. Usually, the high back is the third truck when they travel. Somehow the first two trucks missed it. The high back didn’t.

And that’s the irony. The tankers survived a bomb that melted their tank, only to hit another bomb just as big on their way home.

Three tankers and two infantrymen from the MAP were killed.

This time a section of amtracs were sent to recover the crews. They finally arrived at the dam safe. As safe as the dead can be.

As the night dragged on, the bodies were loaded onto helos, the amtracs were hosed out. The ground was hosed off. Weapons were accounted for. Personal gear inventoried.

The night dragged on, I was the last officer to stay up. The guys from the tank platoon did all the work. The anguish on their faces was painful to watch. This was one of those times they don’t train us for. Leaders need an instinct for knowing what to do. What is the right thing to do? I was torn between staying and providing an officer’s presence, or leaving them to their own grief, to sort out their emotions without an outsider watching, intruding on their tight family.

I left about 2am, I don’t know how late they stayed up. The weapons and other controlled gear were all accounted for. The bodies were sent to Al Asad. Everything was picked up and orderly.

I’ll always wonder if I did the right thing to leave. There’s no way to answer that question. I mentioned to someone there that I was leaving. I don’t know if he cared.

The melted tank was moved the next day. They sent out a tank retriever and a heavy equipment transport to get it. Last I saw it, it was still sitting by itself in a field in Al Asad because the radiation from the melted components made it too dangerous to be near.

My Experience Having COVID-19
FridayNightEcon · 52 Likes