French authorities showed that they understood exactly what they were dealing with in this assault on a kosher deli:

The assault on the Kosher supermarket shook the Jewish community in France and abroad. As dual hostage situations unfolded, police ordered the closure of all shops in the tourist-filled Jewish neighborhood in central Paris, far from the supermarket under siege in the city’s east, according to the Associated Press. And ahead of the Sabbath Friday evening, the iconic Grand Synagogue of Paris was closed, USA Today reported.

President Barack Obama responded by denying the essential Jewish identity of the deli victims. Indeed, he could barely be moved to express any concern at all, beyond the enduring desire to deflect and suppress any criticism of Islam. Note how this played out in a friendly interview with Vox:

Do you think the media sometimes overstates the level of alarm people should have about terrorism and this kind of chaos, as opposed to a longer-term problem of climate change and epidemic disease?

Absolutely. And I don’t blame the media for that. What’s the famous saying about local newscasts, right? If it bleeds, it leads, right? You show crime stories and you show fires, because that’s what folks watch, and it’s all about ratings. And, you know, the problems of terrorism and dysfunction and chaos, along with plane crashes and a few other things, that’s the equivalent when it comes to covering international affairs. […]

The White House and the State Department tried holding the line Obama had drawn, then partially conceded that the killer was motivated by his hatred of Jews while continuing to avoid attributing his hatred and violence to Islamist terrorist recruiting and indoctrination.

The terrorist in France made his Jew-hatred perfectly clear, capturing his murderous deeds with a GoPro camera.

In the nearly eight-minute-long video filmed on a GoPro camera by Amedy Coulibaly, the Islamist gunman can reportedly be seen shooting three of the four victims and delivering an anti-Semitic rant.

Yet, even this news could not extract a clear condemnation of Islamists’ murderous hatred for Jews from the lips or fingertips of President Obama. To admit the truth would have hurt the red-green alliance and hindered “the one we’ve been waiting for” in his fundamental transformation of the Middle East and America. So, it is entirely consistent for former president Barack Obama to elide Christians name when they are blown to bits on their most important holiday, the day on which they make the essential claim of their faith.

No wonder we got to a first-term Congresswoman, Ilhan Omar, feeling comfortable in 2019 describing the 9/11 Islamist terrorist attacks on the Twin Towers and her nation’s capital as “some people did something.”

Lay side-by-side Obama’s statements after the mass shootings of Muslims in New Zealand mosques and the Sri Lanka church bombings during Easter services.

Michelle and I send our condolences to the people of New Zealand. We grieve with you and the Muslim community. All of us must stand against hatred in all its forms.

The attacks on tourists and Easter worshippers in Sri Lanka are an attack on humanity. On a day devoted to love, redemption, and renewal, we pray for the victims and stand with the people of Sri Lanka.

Note that he makes very clear his sympathy for Muslims around the world, while completely avoiding any such affirmation of the global Christian community. To do otherwise would be to admit the truth that Muslims (green) and Chinese Communists (red), are targeting Christians for persecution or death. Where the green faction operates like the KKK at its first height, using murderous violence, the red faction operates a system similar to Jim Crow, regularizing oppression with a system of laws.

Nor is Obama alone in the red-green coalition. Consider other leading Democrats, addressing New Zealand and Sri Lanka, starting with Hillary Clinton:

My heart breaks for New Zealand & the global Muslim community. We must continue to fight the perpetuation and normalization of Islamophobia and racism in all its forms.

White supremacist terrorists must be condemned by leaders everywhere. Their murderous hatred must be stopped.

On this holy weekend for many faiths, we must stand united against hatred and violence. I'm praying for everyone affected by today's horrific attacks on Easter worshippers and travelers in Sri Lanka.

My heart is heavy with grief for New Zealand & Muslims worldwide affected by the tragic murders in Christchurch. The massacre of those in a house of worship, in prayer, is evil & cowardly. We stand with our friends around the world to condemn hate & speak out against intolerance.

Easter is a reminder that there is hope and rebirth even in the darkest of times. We must remember that today, more than ever.

I am horrified by the attacks in Sri Lanka, where so many families were celebrating such a joyous day. Praying for the victims and their loved ones.

Pointing out how odd it is that the most influential Democrats are avoiding saying the word “Christian” isn’t a conspiracy. It's a legitimate observation.

Jim Hanson observed: “It was the conscious avoidance of the word Christian that is sad. It was a widespread bizarre usage too, so someone decided it was a good idea.”

Interestingly, socialist, running for the 2020 presidential nomination as a Democrat, Senator Bernie Sanders avoided both the “Easter” and “Muslim” thing entirely:

Our thoughts are with the victims of the horrific attack in Christchurch, New Zealand. No one should have to fear for their life because of their religion. We must come together to condemn all forms of hate and violence to build a future of respect and understanding.

Our hearts go out to the victims and families of the horrific attacks in Sri Lanka. No person should have to fear for their life in their place of worship. We must work to bring this world together around our common humanity.

Of course, Bernie Sanders did make a very big point of visiting a mosque in solidarity, after the terrorist attack on Muslims in New Zealand. So, we can surely look forward to his public visit to a church to show solidarity, denouncing anti-Christian hate and violence. I’m thinking New York City or Los Angeles, with clergy and first-generation immigrant congregants from Communist China and Muslim majority countries. His staff must be working furiously to find contacts for these groups. 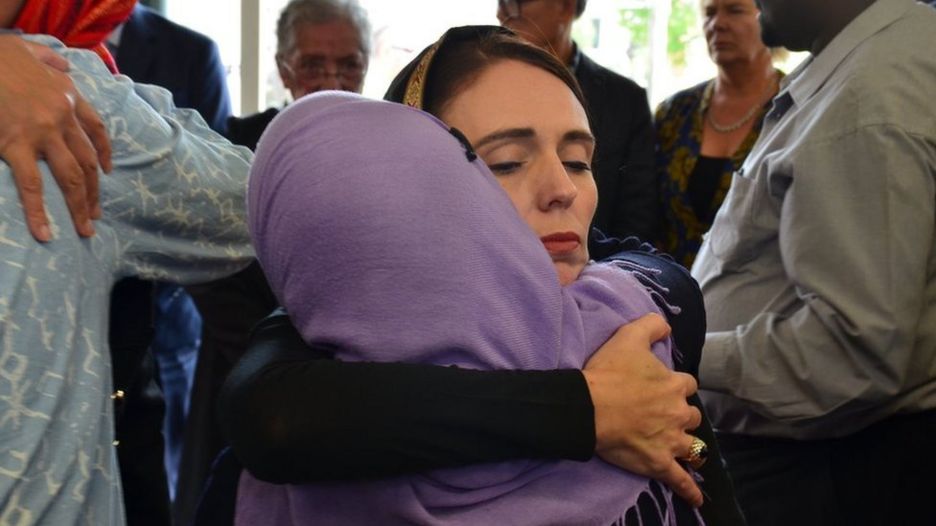 What are the odds that the Socialist New Zealand Prime Minister Jacinda Ardern will put on a necklace with a big cross or crucifix and get photographed attending a Christian church service next Sunday, in a sign of national unity and respect for all faiths? After all, the Sri Lankan government has announced the Sri Lankan Christian churches were targeted in the name of retaliation for the attack on New Zealand Muslim worshipers in two mosques. This follows her conspicuous silence when one of her nation’s prominent Muslim leaders blamed the Jews for the murders of Muslims in New Zealand. Naturally, she will want to prevent any further violence, maybe on New Zealand soil, even if that violence would be against Christians or Jews.

Surely leftist politicians will lead the way in instructing their followers that hateful words lower the bar to physical violence against Christians. Surely Muslim clerics will prominently attend church services next Sunday. Surely the major media in America and Europe will call for positive acceptance of Christianity and an end to negative portrayals of Christians. Book that trifecta at 1,000:1 — call it the Millennium Bet.

If you find not a single betting parlor will take your action, not even the nerviest London book, perhaps it is because everybody knows about the Red-Green Coalition vs. Church, and everyone can see our politics rushing Through the Wormhole with the DNC.

138 people have been killed in Sri Lanka, with more that 600 badly injured, in a terrorist attack on churches and hotels. The United States offers heartfelt condolences to the great people of Sri Lanka. We stand ready to help!

The threat on Christians internationally is real. Heart broken that this happened especially on such a sacred day. The terrorists wanted to send a strong message. Our fight on terrorism has to remain strong to let them know that we won’t back down. #PrayersForSriLanka https://t.co/AsJOI1pkP2