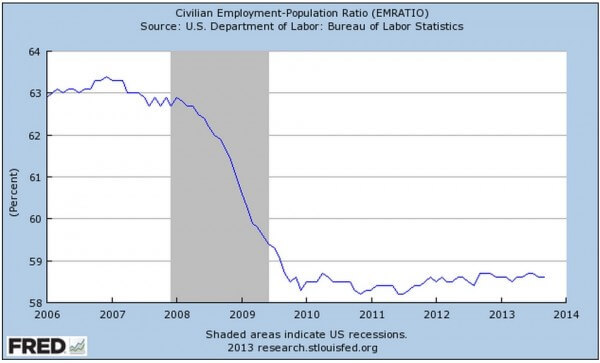 Maybe the federal government should have stayed shut down. If it had, then we wouldn’t have to pick through the lousy September jobs report for some good news. And it isn’t easy. Non-farm payrolls increased just 148,000 last month, the Labor Department said, less than the 180,000 that Wall Street economists had been expecting.

Not much reason in these numbers for the Federal Reserve to taper its bond buying: Barclays:

In light of the moderate tone of the September employment report, we have pushed out our expectation for the first Fed tapering in the pace of asset purchases to March 2014 from December 2013. We now expect the Fed to finish the asset purchase program in September 2014, later than our previous expectation of June 2014.

A few other points:

1. While the unemployment rate dipped to 7.2%, the employment rate — that share of the adult civilian population with a job — stayed flat at 58.6%. (See above chart.) It’s barely risen from its recession lows and is exactly where it was in November of 2009.

2. Likewise, the labor force participation rate remained unchanged at 63.2%. It if were back at pre-recession levels, the jobless rate would be 11.2%. Factoring out demographics probably gives you a “real” jobless rate in the 9-10% range. Indeed, the broader U-6 unemployment-underemployment rate dipped just a bit to 13.6%. See the BLS charts to the right.

4. We are still a ways off from the 5% unemployment rate Team Obama predicted for September 2013 if Congress passed its $800 billion stimulus plan.