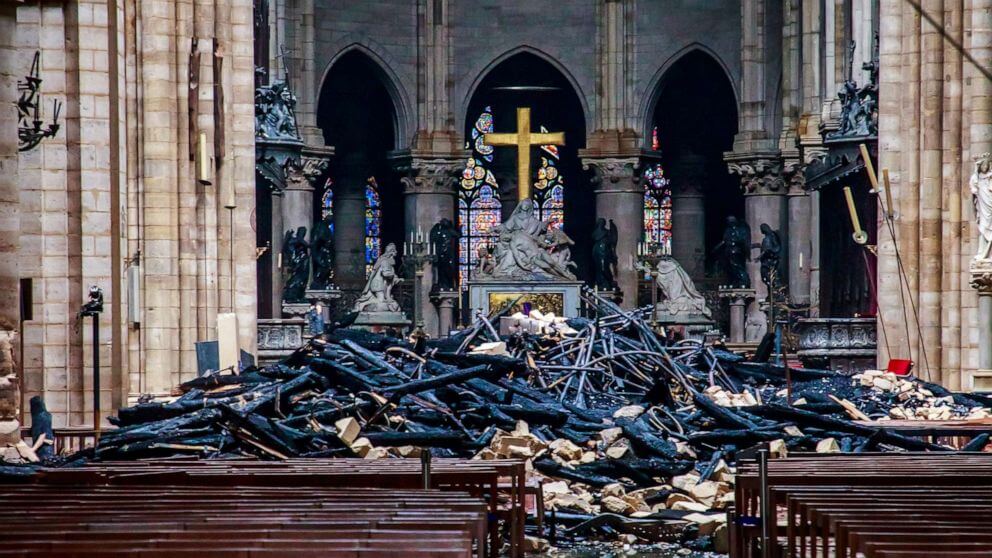 Thank you for your warm, kind, and compassionate comments about the fire at Notre Dame. For most of the world, this was a tragedy in a far-away place; for me, it was a devastating fire in my neighborhood, one that’s left everyone here, including me, quite shaken up.

I’ve received several e-mails, and seen in the comments, suggestions to the effect that “it’s hard not to wonder if the fire were started by Muslim terrorists,” along with comments that say, “We’ll never know the truth,” because were this so, it would be hidden from “the likes of us.”

I think I can ease your concerns in this respect. Here is what is true. It is true, according to a report of the Ministry of the Interior, that in 2017, there were 978 attacks on religious buildings and graveyards in France, including 878 against Christian sites. It is also true that recently, thugs and vandals have done an extraordinary amount of violence and damage to buildings of every sort during demonstrations in Paris, Lyon, and many other cities. But yes, arsonists and vandals have been targeting French churches in a wave of attacks that’s lasted nearly two months. Some have been set on fire, while others have been desecrated or damaged. For example:

The spate of vandalism recalls the series of attacks and vandalism committed by ISIS against the Catholic Church in France and Belgium in 2016, culminating in the unbearable murder of Fr. Jacques Hamel, killed by jihadists while celebrating Mass at a church in Saint-Etienne-du-Rouvray in Normandy. NB: The suspects, in all the above cases, are not only usual ones. In some cases the motive for the attacks is not known; in others, the police have blamed anarchist and feminist groups. (Despite being a secular country, France has long been viewed as a culturally Christian one. So, any nut who’s keen to carry out an attack against authority and “the patriarchy” would think first of targeting a church. There has been some speculation, too, that the attacks may be connected to revelations of the sexual abuse scandal in Catholicism. That has not, at least, helped to reduce ambient levels of anticlericalism. The weekly orgies of lawlessness and vandalism associated with the Gilets Jaunes’ movement have also lowered the barrier to entry to anyone who wants to try giving vandalism for kicks a shot.

That said, I see no reason to think the fire at Notre Dame was started intentionally. Notre Dame is the country’s highest-value terrorist target — second perhaps only to the president and the Senate. It is under 24-hour security watch, with cameras trained on it from every angle; it’s patrolled both by the military and the counter-terror police, including plainclothes. Also, there are thousands of personal cameras trained on it at any given minutes because tourists take pictures there all day long. If an arsonist had done something as strange as scaling the church, Spiderman-style, to reach the place where the fire broke out, we’d have thousands of photos of it — and someone would have stopped him.

The fire started from the top (I saw this). Or more precisely, from the base of the steeple. No arsonist, however determined, could have made his way up there without anyone noticing. I’ve been up to the attic, with my grandfather. It isn’t easy to get up there—it’s nearly 60 meters above the ground, to get there you use a spiral staircase which is closed at the base by a heavy, locked door —and there’s just no way someone could have evaded detection to do it. The attic isn’t open to the public.

Their working hypothesis is the obvious one. They’d been carrying out restoration work in the spire to strengthen it. As part of the work, they installed elevators to the roof. The suspicion is that an electrical fault started the blaze. Negligence may have been involved: One of the fire alarms went off but in a different section of the building. The inspectors didn’t see the fire, so they dismissed it, losing precious time. By the time the security guards saw the first flames, they were already several meters high.

The authorities know exactly who had access to the attic. That night, even before the fire had been put out, prosecutors interrogated roughly 30 people from five different construction companies who had been there before the fire broke out. These people are not ordinary construction workers; they’re highly trained professionals who have trained for years in the painstaking art of restoring gothic cathedrals. You don’t make a career in restoring gothic cathedrals if you’re the sort who wants to see them burn. They interrogated them on the night of the fire and had probably already cross-checked their names in all their databases to see if any of them had a criminal record or a radical political past, Islamist or anti-clerical. That’s not a “too-quick dismissal” of the arson theory; it’s most than enough time to come to a reasonably strong conclusion that arson is not the lead hypothesis.

An arsonist would have done what the vandals did in the cases I cited above, or he would have thrown a Molotov cocktail into the nave. He wouldn’t have climbed to the attic, with everyone on the street watching, then set a tiny blaze that no one would notice for another half an hour.

Nor would the police here be in the least hesitant to say they suspected it was arson, if indeed they suspected it. The reason you know that the the fires at other churches were started by arsonists is because the police said so. You can’t hide something like that. Just like Washington, Paris leaks, and if there had been any decision to try to cover up the truth, you can be sure someone would have tipped off the press and the Senate and the opposition politicians. France, like the US, is a fractious, vibrant democracy, and it’s still under the rule of law. A cover-up like that would be illegal as hell. Being told to cover up the results of a lawful investigation would scandalize the prosecutors. They wouldn’t consent. It would leak, a thousand times over; or more likely, they’d just come forward, we’d see resignations on principle, and total political hysteria. They couldn’t even cover up what Benalla did, and that was a thousand times less significant. No government official, fire service official, or police service official in Paris has suggested any evidence of arson. That means there’s probably no evidence.

Now to be precise, they haven’t ruled out the idea that it was deliberate. They’ve said their chief investigative thesis is that it wasn’t, because there’s thus far no evidence that it was, and by appeal to Occam’s razor, “an accident” is the most obvious hypothesis. Great buildings are vulnerable to fire during restoration because of the tools and chemicals that must be used, and because they’re very old. Cathedrals like Notre Dame are at acute risk because of their ancient wooden roofs. If they weren’t so old and precious, they’d be condemned as firetraps. Construction work on a cathedral is always especially risky because of the open flames and sparks associated with welding and other construction hazards. Windsor Castle burned in 1992, IIRC; the fire began with a bright lamp and cleaning solvent. I don’t wager the workers would have been reckless enough to have smoked in Notre Dame, but then again, I notice that the workers who are right now carrying out restoration on my building sometimes smoke on the scaffolding.

As the cathedral burned on Monday, conspiracy theories, hoaxes, and deliberate disinformation campaigns went viral on social media—many of them coming from Our Friends the Russians, as usual, and some even gaining mention on live US TV coverage. I suppose it’s inevitable. When you combine an international event of so much emotional significance with the rapid dissemination of news on social media, you’re going to get misinformation and, sometimes, completely fabricated conspiracy theories. Unfortunately, this is upsetting for people who lived through the event and who experienced it not only as the global trauma it was but as a personal one, too. Or to put it more plainly: It upsets me.

Catholic League President Bill Donohue told Neil Cavuto that, “if it is an accident, it’s a monumental tragedy. But forgive me for being suspicious.”

“Just last month, a 17th-century church was set on fire in Paris,” Donohue said. “We have seen tabernacles knocked down, crosses have been torn down, statues have been smashed.” In another interview with Host Shep Smith, Philippe Karsenty — the deputy mayor of Neuilly-sur-Seine — said something similar: “We’ve had churches desecrated each and every week all over France” over the past few years. “You will hear the story of the political correctness which will tell you it’s probably an accident, but I don’t think,” he said before he was abruptly (but rightly) cut off by Smith.

Internet users speculated that it was a terrorist act, as did one video that made the rounds showing some guy walking toward one of the cathedral’s towers not long after the fire started with the caption: “No workers present at the time that the Notre Dame Cathedral fire started……So who is this guy dressed in Muslim garb??”

Well, first, he wasn’t dressed in “Muslim garb.” Second, he was a firefighter.

There’s a long history of church fires caused by renovation accidents (the easiest way to ensure that your church is burned down is to try to repair it) because welding and cutting tools are often in use, and large parts of older structures are made of wood. The roof of Notre Dame was made of 5,000 oak trees, felled some 750 years ago and now perfect tinder, so any spark or electric arc from the renovation could easily start a fire. So that’s probably what happened. There’s no evidence of foul play, and if there were, we’d be told of it. And there is some chance we will never know: Paris prosecutor Remy Heitz said the investigation would be “long and complex,” explaining that approximately 50 investigators had begun a probe into the 12-hour-long fire. The evidence may have perished in the blaze.

I hope that sets your minds at ease. Alas, here, our complaint is with a much higher authority.