In the American government’s secular liturgical calendar, February is African-American History Month, and March is Women’s History Month. The subjects of these two observances converge in a historical event we think we know, but which actually was an unexpected gift to the nation: Reverend Martin Luther King, Jr’s “I Have a Dream” speech. Over the years, the secularist left has not only erased King’s religious identity, they have also blotted out her-story. She was uncompromisingly faithful to her Lord and Savior in her music, so the leftists hated her words then and buried herstory.

The March on Washington for Jobs and Freedom

The 1963 March on Washington for Jobs and Freedom marked the centennial of the Emancipation Proclamation and was driven by the long series of unfulfilled promises and setbacks since that moment. Martin Luther King, Jr. was not a senior leader in the civil rights movement, but recognized as a powerful younger voice. The impetus for the march, then, came from A. Philip Randolph, who founded the Brotherhood of Sleeping Car Porters, and who had driven limited concessions with a threatened march on Washington twenty years earlier.

Randolph made the initial application for the march permit, rooting the present movement in the past history, but the speakers and singers represented the rising generation. Bob Dylan and Joan Baez performed. In the end, the nation recalls only the headliner, the keynote speaker, if you will, so let us start there.

Martin Luther King, Jr. was raised the son of a Baptist pastor, formally trained as a pastor, and had polished his professional skills for years before 1963. As with any public speaker, certain themes and stock phrases emerge and evolve over time.The day before the March on Washington, King met with a group of leaders, representing different parts of the civil rights coalition.

According to accounts from those present, the meeting was conducted in a hotel lobby because they assumed any private room would be bugged by Hoover’s FBI. Clergy argued for one set of points, while labor leaders argued for others. Some wanted confrontation, while others wanted a more careful tone.

In the end, King had his advisor, Clarence B. Jones, take notes and go draft an outline. Jones relates that he returned with both an outline and a draft speech. Andrew Young recounts seeing King scratching through words late in the night, polishing the speech. That draft was typed for delivery and distributed in the morning to news outlets.

At the end of a long program, Martin Luther King, Jr. walked to the podium and began to deliver his speech. Clarence B. Jones recounts that he was surprised to hear the words he had drafted delivered almost word for word. It was a fine speech, grounded in familiar themes. And… the prepared speech was not the “I Have a Dream” speech.

Jones has consistently recounted that he did not draft, nor did King insert, the famous words in the prepared speech that had been typed up for delivery. So what happened? The answer lies in her story, a bit of history largely obscured as inconvenient. 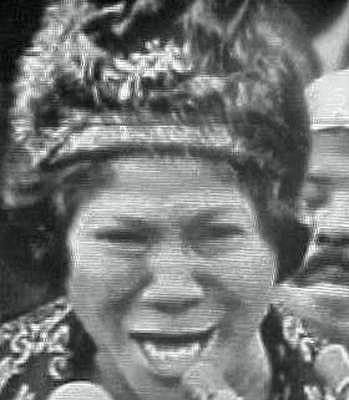 Martin Luther King, Jr. was not the most prominent personality at the march. Just before he spoke, Rabbi Joachim Prinz, who was expelled from Hitler’s Germany in the 1930s, connected the American civil rights movement with Jewish history and the Holocaust. Yet, Rabbi Prinz prefaced his prepared remarks with “I wish I could sing,” This is because he had to follow “the Queen of Gospel,” Mahalia Jackson.

Mahalia Jackson was a long-established international star who never once compromised her convictions to conform to social expectations. She sold millions of copies of her albums, without ever once bending to the suggestion that she could be even bigger if she would just cross over to secular fashion. She even refused to sing jazz with Louis Armstrong.

When she was the celebrity contestant on “What’s My Line,” she nearly stumped the expert panel, who could not conceive of a successful singer who did not perform in night clubs or cabarets. The show host had to make the point, after Mahalia left the set, that as a gospel singer, Mahalia Jackson never performed in a cabaret or night club. Instead of limiting her reach, she preserved her witness, unmuted by demands for compromise.

In this context, understand that a national and international celebrity, economically and artistically successful, could not get a hotel room or eat in a restaurant after audiences cheered her on the stage. White supremacy had so distorted our society and laws as to bar a woman from renting a room or buying a meal she could easily afford. In response, she used her first big earnings to buy the largest Cadillac available.

This was both a symbol of success and a sad defensive move. Jackson needed the Cadillac’s back seat for a bed, and she needed to be able to carry groceries to eat. She could sell 8 million copies of a record, but she was going to have to sleep in her car like an itinerant club singer.

You can understand, then, how Mahalia Jackson would be motivated to give her voice, her prestige, and her money to support the civil rights struggle. She began appearing at the same events as Martin Luther King, Jr., getting crowds on their feet before he spoke. Eventually, he would call and ask her to sing over the phone, lifting his spirits in dark times. Watch their interaction in a church:

At the March on Washington, Mahalia sang “How I Got Over” and, at King’s request, “I’ve Been Buked and I’ve Been Scorned.” Watch this CBS video through the grainy black and white television recording:

So, a long partership, of the woman who defined “gospel music” as a style, and a Baptist preacher who was at the height of his talent, came together on a global stage.

“Tell them about the dream, Martin!”

Clarence B. Jones has repeatedly told of the moment that made history. It came as King hesitated over a line, deciding whether to close as he had planned.

As King neared the end, he came to a sentence that wasn’t quite right. He had planned to introduce his conclusion with a call to “go back to our communities as members of the international association for the advancement of creative dissatisfaction.” He skipped that, read a few more lines, and then improvised: “Go back to Mississippi; go back to Alabama; go back to South Carolina; go back to Georgia; go back to Louisiana; go back to the slums and ghettos of our Northern cities, knowing that somehow this situation can and will be changed.”

Nearby, off to one side, Mahalia Jackson shouted: “Tell them about the dream, Martin!”

Jones tells us that he saw King react visibly to Mahalia’s call. He slid the prepared speech over to one side of the podium. His body language shifted from political speaker to preacher. Jones marked this change and remarked to those near him.

“What most people don’t know is that she shouted to him as he was speaking, ‘Martin! Tell them about the dream! Martin, tell them about the dream!’ I was there. I saw it with my own eyes. I was not on the stage, Dr. King’s back was to me as he was speaking, but I could hear and see him,” Jones tells TIME. “He took the written text that he had been reading from and moved it to the left side of the lectern, grabbed both hands of the lectern, and looked out to the thousands of people out there, and that’s when he started speaking extemporaneously. When Baptist preachers get particularly moved, many of them have a habit of taking their right foot as they’re standing and rubbing it up and down the lower part of their left leg. I saw Martin start to rub his right foot on the lower part of his left leg, and I said to someone who was standing next to me, ‘These people out there, they don’t know it, but they’re about ready to go to church.’”

Here is Jones talking to the Wall Street Journal in 2013, the 50th anniversary year of the speech:

So, it was at the inspiration of the Queen of Gospel, a woman utterly committed to uncompromising witness, that Martin Luther King, Jr. launched from prepared remarks into an extemporaneous passage. It is this passage that came to define the speech and the event.

Perversely, it was the outrageous abuses of the FBI, now the darling of those who hate President Trump, that gave us precise records of much of the discussions and planning in the civil rights movement. Attorney General Robert Kennedy signed off on Hoover’s boys wiretapping anyone who looked effective.

Under a memo titled “Negro Question,” the FBI memo said this about King: “He stands head and shoulders above all other Negro leaders put together when it comes to influencing great masses of Negroes. We must mark him now, if we have not done so before, as the most dangerous Negro of the future in this Nation.”

That memo was dated Aug. 30, 1963 — two days after the March on Washington. All these years later, Jones is actually grateful for those wiretaps. Thanks to the FBI, he has a vast — and accurate — archive of the time.

“If I have a fuzzy memory or hazy memory, I look at it, and there’s a verbatim transcript of the conversations about a certain event, a certain person or a certain problem we were discussing,” Jones says.

FBI recordings reinforce the significance, the threat to established politics. The recordings of the speech and of Mahalia Jackson’s singing convey some of the effect of the Queen of Gospel music, and of a Baptist preacher at the height of his rhetorical power, converging to give America and the world an unexpected and much needed gift.

Update: Thanks to Ricochet member DonG for pointing out that perhaps the most famous and consequential extemporaneous speech of the past century in America was delivered on the steps of the monument to a president whose brief, hastily crafted remarks became one of the most important, most remembered speeches in the entire history of the United States of America. Here is a different view of the “I Have a Dream” speech: