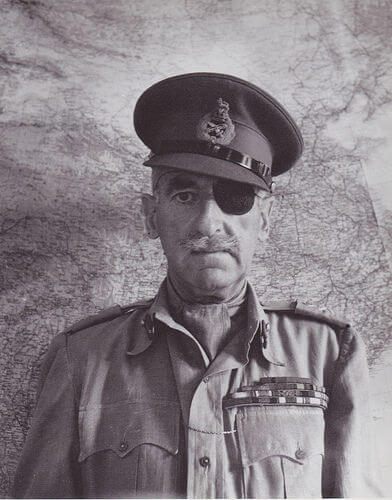 A tweet directed me here on Wikipedia, and made my day:

Sir Adrian Paul Ghislain Carton de Wiart] VC, KBE, CB, CMG, DSO (5 May 1880 – 5 June 1963) was a British Army officer of Belgian and Irish descent. He served in the Boer War, First World War, and Second World War; was shot in the face, head, stomach, ankle, leg, hip, and ear; survived two plane crashes; tunnelled out of a POW camp; and bit off his own fingers when a doctor refused to amputate them.

Describing his experiences in World War I, he wrote, “Frankly I had enjoyed the war”

In his memoirs, Happy Odyssey, Carton de Wiart makes no reference to his wife or to his daughters [nor, to be fair, to his Victoria Cross, Britain’s highest award for gallantry].

….At one time during his Warsaw stay he was a second in a duel between Polish members of the Mysliwski Club, the other second being Baron Carl Gustaf Emil Mannerheim, later commander-in-chief of Finnish armies in World War II and President of Finland. Norman Davies reports that he was “…compromised in a gun-running operation from Budapest using stolen wagon-lits”.

… He was active in August 1920, when the Red Army was at the gates of Warsaw. While out on his observation train, he was attacked by a group of Red cavalry, and fought them off with his revolver from the footplate of his train, at one point falling on the track and re-boarding quickly.

… He made five attempts i[to escape from his WW2 POW camp] including seven months tunneling. Once Carton de Wiart evaded capture for eight days disguised as an Italian peasant (which is surprising considering that he was in northern Italy, couldn’t speak Italian, and was 61 years old, with an eye patch, one empty sleeve and multiple injuries and scars).

His wife died in 1949 and in 1951, at the age of 71, he married Ruth Myrtle Muriel Joan McKechnie, a divorcee known as Joan Sutherland, a woman 23 years his junior.

His memoirs are now on their way to me. The preface was written by Winston Churchill.

Of course it was.