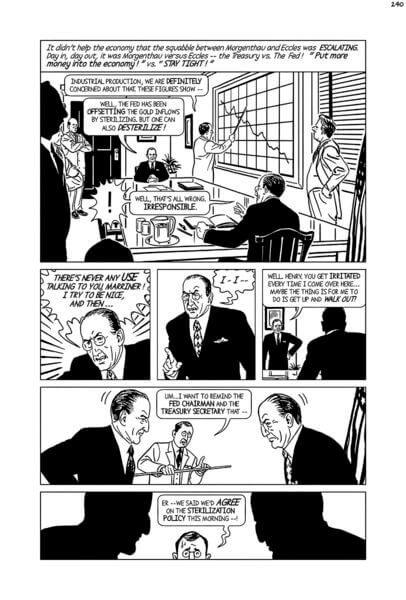 Just to get citizens into a suitably docile condition to receive the President’s State of the Union address, Paul Krugman reminds them in a recent New York Times column that they aren’t bright enough to criticize government policy.

Americans are especially thick, apparently, about the need for deficit spending. “It’s very hard,” Dr. Krugman confides, just as he might in a faculty lounge, “to try to communicate even the most basic truths of macroeconomics, like the need to run deficits to support employment in bad times.”

Even President Obama, to Dr. Krugman’s apparent irritation, occasionally slips into the thoughtless habit of “echoing Republican rhetoric about the need for the federal government to tighten its belt…” To illuminate, Dr. Krugman offers a lesson about the Depression within the Depression of the later 1930s: “consider what happened in 1936…”

… F.D.R. had just won a smashing re-election victory, largely because of the success of his deficit-spending policies. It’s often forgotten now, but his first term was marked by rapid economic recovery and sharply falling unemployment. But the public remained wedded to economic orthodoxy: by a more than 2-to-1 majority, voters surveyed by Gallup just after the election called for a balanced budget. And F.D.R., unfortunately, listened; his attempt to balance the budget soon plunged America back into recession.

A look at what actually happened in the later 1930s, however, yields a more nuanced picture. For one thing, the government did run a deficit through the later 1930s, a fact that gets obscured in Dr. Krugman’s column. The pro-deficit interpretation of that period therefore has to argue that the deficit was simply not wide enough.

Ok. If you want to argue that money was generally too tight, you can point to other things as well. Reserve requirements for banks were effectively doubled in this period, taking money out of circulation. At some points, authorities sterilized gold inflows, producing less money, to curtail gold’s expansionary effect.

Recent research, however, has confirmed that other factors did much to bring about the double-dip of the late 1930s. The Wagner Act, a law that gave unions greater power than they enjoy today, had been passed in 1935. Unions had loyally waited through the election of 1936 before exploiting the law to its fullest extent, staging sit-down strikes and demanding (and receiving) higher wages from still-fragile firms.

Since the firms could ill-afford the increases, they rehired more slowly, even laying off workers where they could. Jobless rates moved into the high teens. A new divide arose between those with union-protected jobs and those who could not find their way into the work force. “Nice Work If You Can Get It,” a 1937 love song by George and Ira Gershwin, became a hit in part because the line resonated in a way that had nothing to do with romance; workers were shut out from everyday factory or office work. Scholars Harold Cole and Lee Ohanian have documented the negative effect of the Wagner Act, and are at work on a great new textbook that will demonstrate the damage wrought by politically inflated wages over the course of our history.

In the same period, taxes were also damaging. Income taxes were high, but they were not the sole offender. Among the creepiest levies of the period was the New Dealers’ “undistributed profits tax,” which penalized businesses that saved, on the principle that company spending would force recovery.

The greatest weight dragging down the economy of the late 1930s, however, was not individual policies but pervasive uncertainty. The entire economy hesitated, waiting to see what Democratic leaders would do with the expanded powers given to them by the 1936 Democratic landslide. If Washington backed up the sit-down strikers entirely, for example, then factory owners would no longer be sure what they could claim as their property. Washington might raise taxes yet farther, and companies feared that then they could not operate at all. They went on what, even then, was called “capital strike.” Small wonder that Ayn Rand penned  her dystopian novel Anthem in 1937— the flight into the forest of her entrepreneurial character, known as Equality 7-2521, was an early version of John Galt’s capital strike.

Despite the anxiety it produced in the private sector, the authorities seemed to relish playing with power. A feud over Dr. Krugman’s favorite area, monetary policy, illustrates this.

Marriner Eccles, the new chairman of the Federal Reserve, preached looser monetary policy. Treasury Secretary Henry Morgenthau, by contrast, favored budget-tightening. The Eccles-Morgenthau row infuriated their fellow officials, as artist Paul Rivoche shows in the drawing here, a cartoon picture from our forthcoming illustrated version of my own history of the era, The Forgotten Man (Click on the photograph to see a larger version). The two officials, especially Morgenthau, were more concerned with putting each other down than with what transpired outside Washington as a result of their squabble.

The officials took this license because their boss, Franklin Roosevelt, seemed in no hurry to settle the dispute. On some days, the president worried aloud about budget deficits, like a “Dutch householder” as one journalist described him. “I have said 50 times the budget will be balanced,” Roosevelt said testily in May 1937. On other days, the moody chief executive backed new spending. His old motto, “bold, persistent experimentation,” took on a perverse meaning. The extended unpredictability of government’s direction itself terrified markets.

One of the star economists of the 1930s, Benjamin Anderson of Chase, looked back at it all just a few years later. He concluded that the Depression lasted so long because the government had decided to “play God.” Anderson abhorred deficits, not only because of their effect on the exchange rate with sterling but also because they signaled arrogance and therefore dangerous future spending. Alas, Anderson’s textbook on the 1930s, Economics and Public Welfare, has not been taught much since World War II.

Recent work by Steven Davis of the University of Chicago and other scholars picks up the same theme. Davis finds a correlation in all eras between economic trouble and policy uncertainty— especially that generated by government expansion. Larger government means more capacity for damage, and larger government tends to result from greater spending. Voters may fear deficits because deficits signal larger government, which, in turn, they suspect may impede long-term growth.

It’s arrogant for anyone to assume that citizens and presidents reject spending because they are undereducated. The truth is that scholarship, some old and some new, supplies compelling reasons why voters might cringe at deficit reports, or hesitate to back endless spending or monetary expansions. The only thing those voters don’t do is spell out their logic in memos or textbooks. That intermediate work is the job of columnists. Why is it not being done?