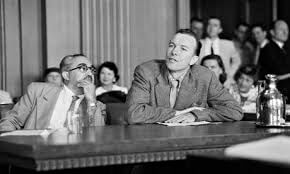 Uncle David was 17 when he and the family left the Soviet Union.  He became a member of the Communist Party-USA.  As a kid I thought he was the only sophisticated guy in the family.  He smoked a pipe and read the New Yorker. My Dad told me that when Hitler and Stalin agreed to […]

There are 2 comments.
But you can't read them because you're not signed in!