The suspect in the first of two closely timed attacks on Orthodox Jewish boys sure doesn’t look like a skinhead or Klansman, which is why there is not a word about the suspects’ race.

The boy was walking home with his mother around 6 p.m. Sunday near Throop Avenue and Walton Street in Williamsburg.

Without saying a word, the passerby approached and punched him repeatedly in the face before rushing off, police said.

The attack likely NOT random, as it was followed by a second similar attack in the area, beating down another young Orthodox Jewish boy.

Just 30 minutes later, a second Orthodox boy, age 12, was walking home when he was approached by four or five strangers near Walton Street and Union Avenue — just over a block away from the previous attack, police and law enforcement sources said.

The group of men shoved the boy to the pavement and punched him before fleeing, law enforcement sources added.

So, someone spun these men up and pointed them at Jewish boys. If words 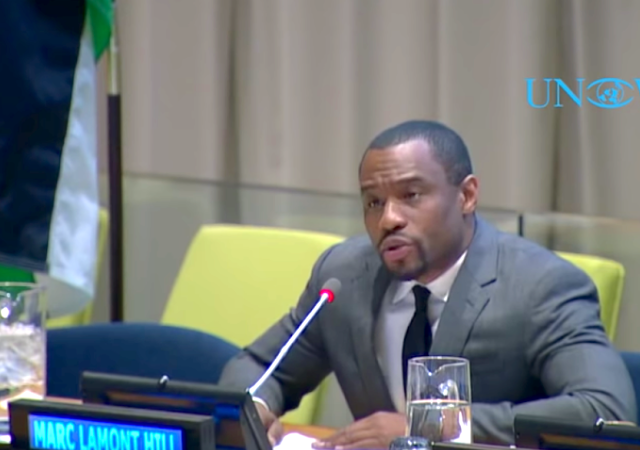 matter and if we are supposed to check public figures on setting a hateful tone, where is the media and DNC outrage, heck, where are Saint Sasse, Defender of the TruCon Faith Flake, and the Venerable (if he’s not lyin’) Ryan? Their silence, now, condemns them, especially after another Democrat pundit, Marc Lamont Hill, went full eliminationist.

In a speech delivered at the event’s opening meeting, he specifically argued that the Palestinians should be allowed to use methods of violent resistance to combat their alleged oppression by the Israelis.

Watch Marc Lamont Hill’s whole UN speech, or at least watch the most on point clip:

His call for the elimination of Israel, is linked with and justified by Black Lives Matter’s hatred of police, by literally blaming the Jews for alleged American police anti-black brutality. CNN owns this. Twitter (Jack Dorsey) and Facebook (Mark Zuckerberg) are as complicit, based on their own demonstrated standards for de-platforming “hate” and “unsafe” speakers. figures on setting a hateful tone, where is the media and DNC outrage, heck, where are Saint Sasse, Defender of the TruCon Faith Flake, and the Venerable (if he’s not lyin’) Ryan?

Not a peep from @JakeTapper or @brianstelter about their CNN colleague @marclamonthill‘s public call for the destruction of Israel and a Jewish genocide yesterday. The real test isn’t what either will say on Twitter or via DM, but whether they will cover the scandal on TV.

Then the heat got too high, and CNN dumped Hill with a one sentence statement to Mediaite, but were silent on his eliminationist Jew-hatred.

“Marc Lamont Hill is no longer under contract with CNN,” a CNN spokesperson told Mediaite.

Indeed, CNN has simply erased Marc Lamont Hill, and failed to post anything about his firing. [UPDATE: In the late evening hours of 29 November, after I published this piece, CNN finally posted a story on the firing. CNN’s story, about dismissing Marc Lamont Hill, had not one word of corporate condemnation or contrition.

CNN said Thursday that it had severed ties with contributor Marc Lamont Hill following controversial comments the liberal pundit made about Israel.

So, CNN considers the comments “controversial,” not hateful or unsafe. “Liberal” is good in CNN’s view, so we are left with Israel as the reason CNN reluctantly had to part ways with Hill. This was a rather subtle way to blame the Jews. END UPDATE]

Were CNN to do otherwise, they would have to attack the intersectional darling, Congresswoman-elect Ilhan Omar, about whose Jew-hatred Susan Quinn wrote in QOTD: Anti-Semitic or Anti-Israel—or Both? See Powerline generally for coverage from her state, and see Scott Johnson’s withering piece on Ilhan Omar at RealClearPolitics.

And despite her self-portrait as an apostle of love, Omar is a proponent of the anti-Israel Boycott, Divestment, Sanctions movement. She is, to put it bluntly, an Islamist hater of Israel. In a 2014 tweet during Israel’s hostilities with Hamas, for example, Omar prayed for “Allah to awaken the people and help them see the evil doings of Israel.” In a May 31 tweet this year, she referred to Israel as an “apartheid regime.”

Omar soft-pedaled her support for BDS during her appearance before a large Democratic audience at Beth El Synagogue in St. Louis Park the week before the competitive Democratic primary on Aug. 14, though she has proudly reiterated it since her election. During the campaign the Star Tribune kept her support of BDS a deep secret to voters who get their news from the paper. Although she holds herself out today in the Star Tribune an apostle of love, Ilhan Omar is an enthusiastic trader in one side of a bigoted coin.

So, the Democratic Party is returning to its anti-Semitic roots, but Klan Party 3.0 reflects the global coalition of the secular left and Islamists. The leftist party and their media mouthpieces misdirect false claims of outrage against right wing “extremists,” while shrinking the space in society where Jews are safe. Time for real leaders, not the self-serving posers and office-seekers, in the Republican Party to stand up against Klan Party 3.0. President Trump, your nation needs you all the more, to hate back the Jew-haters with interest.