We all love a bright sunny day and want the soldiers, who must parade, to have a pleasant day, while we watch them at their best. We all enjoy images of Flanders Fields clothed in bright red poppies. Yet, this day, perhaps God laughed at mens’ plans, and maybe the heavens wept for the millions dead and maimed.

The bags across the soldiers’ chests, in the photographs below, contain their gas masks. The uneven terrain, in the second photograph, was the result of such intense and repeated artillery bombardment as to turn the face of the earth into that of a golf ball, completely dimpled. Today, the land, if not developed, is coated in green, but still shaped by shell holes, so deep and numerous as to not yet be erased by the passage of 100 years. So, the weather in France, on 11 November 2018, was perfect for the occasion. 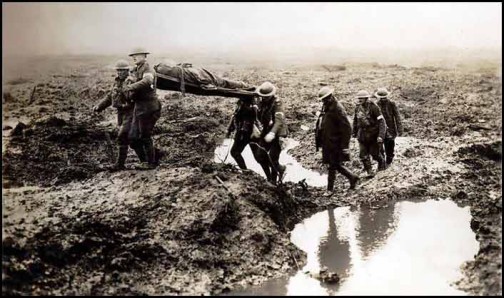