Tom was young when the war broke out, too young to legally enlist. He lied about his age and enlisted as a private soldier anyway. He spent the first years of the war as a private, and then mustered out after three years as a corporal. By that time, Tom was old enough to join the army legally.

His eldest brother had gone to the United States Military Academy at West Point and managed to graduate just as the war was heating up and get a commission as an officer. The eldest brother had done fairly well for himself, well enough and with enough promotions that he could have an aide-de-camp. Tom was commissioned a second lieutenant and became one of his brother’s aides. By this time, it was 1864. Lincoln had finally gotten a general who fights, and some of the hardest fighting of the war was still before them.

Throughout military history, units have always had some sort of standard or “colors,” a flag. The Romans had their eagle standards. The purpose of such devices is three-fold: 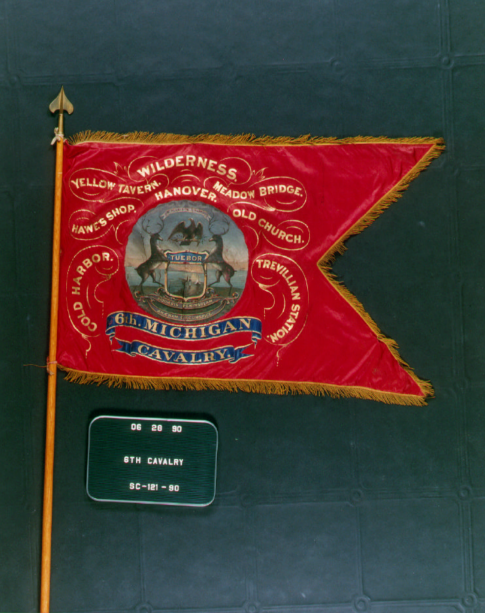 Losing the regimental colors or other such devices was considered a very bad thing. The person charged with carrying the colors was often told, “Don’t lose them while you’re alive.” It was generally considered a high honor to be given charge of the colors. In the old British army, they had had a specific rank for a young officer who would be in charge of the regimental colors: ensign. The name itself had meant he would carry the ensign/flag/colors/insignia. It was a great dishonor to lose one’s organization’s colors.

Conversely, it was considered glorious to be the one to take the colors of the other army.

Tom really shone right near the end of the war. It was during a week in early April, 1865. The war would officially end on May 9th, so just over a month later. Lee would surrender on April 9th, and it was in that final push that led to Lee’s surrender that Tom made history. There were many battles and skirmishes in that final week of Lee’s army. On April 3rd, there was a battle called the Battle of Namozine Church. Namozine is in central eastern Virginia. Tom joined the Federal troops in their charge and leapt his horse over the Confederate barricades. The Confederate forces had been firing at him, but now that he was in among them, they were a bit confused and fell back. Tom spotted their color bearer, went straight for him, grabbed the flag away, and then demanded the Confederates around him surrender. Fourteen men did surrender. He took them back behind Federal lines and requisitioned another horse, since his had been shot during the attack.

Capturing the colors and men of the Second North Carolina Cavalry earned Tom a Medal of Honor, the highest medal the United States of America bestows.

But the war was not done. Three days later, there was the Battle of Sailor’s Creek. Once again, the Federal troops charged, and Tom was right in the thick of it. Again, under fire, he leapt his horse over the Confederate barricades, firing his pistol to scatter the enemy. He saw the Confederates trying to form a new battle line and spotted the color bearer they were forming on. Tom charged forward, receiving a bullet to the face that knocked him back on his horse. He managed to straighten back up, shoot the color bearer through the heart, and grab the colors. Holding the flag aloft, Tom rode back to the Federal lines. Another officer shouted for him to “Furl that flag!” so he didn’t get shot by Federal troops. He didn’t either one, furl the flag or get shot by his own side. He just kept riding to where his brother’s flag was. He handed over the Confederate flag and said to his brother, “The damned Rebels shot me, but I’ve got my flag.” Tom turned back to rejoin the battle, but his brother stopped him to send him to get his wound treated. Well, it wasn’t quite that easy. Tom didn’t want to bother and thought that he had a fight to get back to, so his brother had to have men arrest Tom to get him to report to the surgeon.

That day, April 6th, 1865, Tom earned his second Medal of Honor, only three days after his first. Since 1861 when the Medal of Honor was created, there have been 3,520 awarded, and that includes only nineteen people in more than a hundred-fifty years who have earned a second Medal of Honor. Tom was the first of these. That is Tom’s claim to history. At the time, Tom was less than a month beyond his twentieth birthday.

Tom went on to continue his career as an officer in the United States Army until his death at the Battle of Little Bighorn in 1876, in which his elder brother George Armstrong Custer and a younger brother, Boston Custer—who was a civilian contractor—also died.

And now, as Paul Harvey would say, you know the rest of the story.