In that kind of environment, compromise and finding common ground is more likely—or at least possible. Why? Because both sides are grounded in at least one fundamental idea that’s the same. Namely, that deficits are usually undesirable. It’s a shared premise.

I admit this is a peculiar example in 2018 since neither party apparently cares much about deficits anymore, but I digress.

Unfortunately, there are fewer and fewer shared premises from which we proceed. That affects how we process facts, not just how we assign significance to them. This phenomenon eventually creates an unbridgeable gap. We’re seeing that play out in the direst way in the Brett Kavanaugh confirmation battle.

Enough has been written about the hearings themselves, the political machinations, and the accusations. I’m not going to talk about any of that specifically. Instead, I’m interested in highlighting a very specific reason why this topic has created a divide that will not (and cannot) be closed.

First, the obvious: Yes, the timing of the nomination so close to midterms is clearly a factor in the intensity of the Kavanaugh furor. As is the potential impact of the appointment on abortion jurisprudence. As is, too, the already ratcheted-up baseline level of partisan division and Trump-related rage.

But there’s something else. The way that progressives and conservatives organize their reality is now fundamentally different.

To put a fine point on it: Modern progressives, broadly speaking, order society based on group affiliation. This is the lens through which they view nearly every ideological or cultural question.

Conservatives, by contrast, still orient their thinking primarily to the individual, particularly when it comes to something like due process rights or a default presumption of innocence.

As such, conservatives look at the hearings and are flabbergasted that unsubstantiated and uncorroborated accusations against someone with no previous history of bad behavior are enough to condemn him in the minds of half the country. They see Kavanaugh’s anger during the reconvened Thursday hearing as justified and righteous. After all, he’s been accused of sexual assault and organizing gang rapes. If you were (falsely) accused of heinous crimes that caused you and your family significant anguish, you would likely be upset as well.

Progressives have a much different perspective. Viewing the hearings and related news with a group-oriented mindset fosters ideas connected to Judge Kavanaugh and Dr. Christine Blasey Ford’s group identities. These ideas inform the way progressives perceive each of the key figures in this story.

Whereas even a fair-minded conservative might look at this situation and think, “There are simply too many gaps for a conclusion to be drawn at this time,” someone whose mindset is oriented around groups will fill in those gaps with their perceptions of the relevant groups, drawing a definitive conclusion as a result. This is true of most Democrats and, certainly, most non-Fox mainstream media members (but I repeat myself).

Specifically, note that the lion’s share of the criticisms or condemnations of Kavanaugh—even by media members—reference his race, sex, schooling, and socioeconomic level. The negative associations that the speakers have regarding those groups attach to Kavanaugh, bolstering a record that is largely devoid of content.

Opinion writers at major outlets don’t even attempt to be subtle about it. Here’s a small sample of some recent headlines regarding Kavanaugh:

The roots of male rage, on show at the Kavanaugh hearing (Washington Post)

A crying Brett Kavanaugh. This is what white male privilege looks like (San Luis Obispo Tribune)

Kavanaugh is lying. His upbringing explains why (Washington Post)

The Entitled Rage of Brett Kavanaugh (The Cut)

In sum, Kavanaugh critics believe that society is full of “Brett Kavanaughs,” that they knew people like him in high school or college, and/or that they’ve worked with people like him. They transfer all of those negative beliefs, feelings, and experiences to Kavanaugh himself, making it easy to say, “Of course he did this—this is how privileged, rich, white males who attended elite prep schools act. You know how they are.”

On the other hand, their favorable view of Dr. Ford draws in part from positive aspects of two groups: Women (generally) and sexual-assault survivors (specifically). Most of them know—or are themselves—survivors of some form of sexual assault, and those understandable and powerful sympathies immediately attach to Ford.

Thus, when Ford appears to be enduring a tremendous emotional toll, it only serves to strengthen their support for her. Here, the reaction from someone viewing her testimony with an individual-centric mindset would tend to have a similar reaction, as Ford certainly seemed to have genuinely suffered a trauma. However, their sympathy to her does not extend to the point that they believe Kavanaugh committed the act. 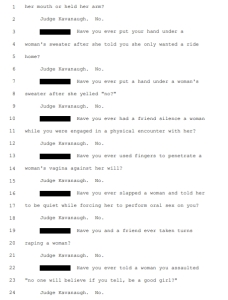 The two groups diverge sharply as to the response to Kavanaugh’s anger and sorrow, though. Individual-oriented folks have the same reaction to Kavanaugh as they did to Ford. That is, great sympathy.

On the other hand, group-oriented observers saw Kavanaugh as an envoy of the dreaded white patriarchy, and took his anger not as an understandable response to being accused of awful crimes, but, instead, merely the entitled rantings of a man-child terrified of the possibility of his group at long last losing its power.

For conservatives, individual trumps group. For progressives, group trumps the individual — and, most critically, the concept of group guilt is implicitly but powerfully accepted. That makes it easy to scoff at ideas like the presumption of innocence, because, to them, Kavanaugh is already terminally infected with the residual guilt that emanates from his group memberships.

Note also that these group associations are so strong for progressives that they can actually defy objective fact. For example, if there is a contextually negative association with “old, white man,” someone who is a middle-aged Hispanic man can become “old” and “white” if progressives deem him worthy of condemnation.

This, again, is something more than a simple assessment of the state of a glass of water.

Proceeding from such a fundamentally different premise about whether group membership or the individual matters more makes it impossible to find common ground in a situation like this one. That’s because we’re left with a binary choice: Either you believe Brett Kavanaugh sexually assaulted someone, or you don’t.

If one side is convinced he did, based on negative group characteristics they ascribe to him, then there is nothing that can be done.

It will be difficult to prove what happened on an undetermined night in the summer of 1982. It will be impossible to prove that Kavanaugh isn’t a wealthy, white male.

As such, many of the people observing this story on both sides have already made up their minds. It is incredibly unlikely the FBI investigation will produce any new evidence, which is what it would take for an individual-focused person to believe Kavanaugh is guilty of sexual assault. That lack of additional evidence won’t matter to group-focused observers who have already mentally convicted him—and who never would have supported him in the first place. For them, his characteristics, coupled with Ford’s testimony, easily overcome the problem of lack of corroborating or substantiating evidence.

As for the two movies we’re watching on a single screen, Adams says that the way to merge our realities again is that “one [side] needs to see [its] expectations violated in ways that even cognitive dissonance can’t explain away.”

Sadly, we’ll have to look elsewhere for that violation. To those who think Kavanaugh is a sexual predator (and will happily repeat that as fact for the rest of his life), there is nothing that could possibly happen now to cut against their expectations in such a way as to make them reverse their position. Even a hypothetical situation in which Ford completely recanted her story would simply shift the narrative to “she was intimidated into doing so.”

Kavanaugh’s confirmation, then, has become a societal proxy war for progressives. Kavanaugh is emblematic of the evil they see in certain segments of our culture. And our competing ways of ordering our reality will ensure it isn’t the last such battle.