4 Now Deborah, a prophetess, the wife of Lappidoth, was judging Israel at that time.
5 She used to sit under the palm tree of Deborah between Ramah and Bethel in the hill country of Ephraim; and the sons of Israel came up to her for judgment.
6Now she sent and summoned Barak the son of Abinoam from Kedesh-naphtali *, and said to him, “Behold, the LORD, the God of Israel, has commanded, ‘Go and march to Mount Tabor, and take with you ten thousand men from the sons of Naphtali and from the sons of Zebulun.
7 ‘I will draw out to you Sisera, the commander of Jabin’s army, with his chariots and his many troops to the river Kishon, and I will give him into your hand.’ “
8 Then Barak said to her, “If you will go with me, then I will go; but if you will not go with me, I will not go.”
9 She said, “I will surely go with you; nevertheless *, the honor shall not be yours on the journey that you are about to take, for the LORD will sell Sisera into the hands of a woman.” Then Deborah arose and went with Barak to Kedesh.

As Dr. Bastiat wrote late last week, This Has Nothing to Do With Kavanaugh“– he’s just collateral damage. It’s a shame somebody had to be destroyed, but as long as he’s conservative, it’s not too much of a shame.” Andrew McCarthy warned “It’s a Set-up.”

As I argued yesterday, you are not going to have decent, meritorious people in law and politics if Democrats are permitted to mug Kavanaugh the way they mugged Judge Bork and Justice Thomas, the way they try to mug every Republican judicial candidate whose nomination threatens to close off the courts as an avenue of radical social change — i.e., whose confirmation makes it more likely that the Left will have to try to convince voters and lawmakers in the democratic process, rather than have unaccountable judges impose progressive pieties.

And it is about the fundamental transformation of America along the correct arc of history. […]

And, there should have been no surprise at personally destructive surprises. […]

And, we know that the Senate Republicans set themselves, and the American people, up with that pasty panel of dudes. […] And the best and brightest, led by the most experienced, had no rehearsal, nor any game plan to rehearse. […]

And, if there is an arc of history, none of us can truly trace it. The events of our lifetimes suggest that we, collectively, can change our nation’s direction. America’s fate is what her citizens make of it. 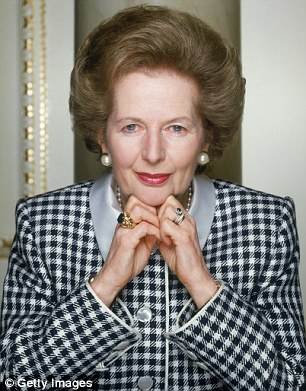 History records the raising up of great men, and, more importantly today, great women. Prime Minister Margaret Thatcher did not take office after the old boys all died out of office. She did not wait her turn. And, she most certainly did not speak timidly, trimming her sails to the blustering airs of the House of Commons and the BBC. Challenged from within the party, and without, she answered: “You turn if you want to. The lady’s not for turning.” After over a decade in office, she went out in a blaze of alpha female glory (highlights here).

As Susan Quinn notes, “the goal of humiliating Republicans and delaying the confirmation vote is crystal clear. It’s time for the Republicans to take swift and deliberate action.”

I’m hopeful there are enough people (including women) who are appalled at the actions of Ms. Ford and the Democrats, and will see through their unconscionable plan and vote for a Republican Senate majority. And I recognize that with Kavanaugh on the bench, the Democrats will continue to investigate him if they win the election. He should be consulted to determine if he’s willing to go through that process.

Unfortunately, Judge Kavanaugh and his family have no choice but to fight for their lives now. Understand this: if he is judged unfit by the Republican Senators, tainted by these sexual charges, then he is also unfit for the bench from which he seeks to rise. His wife and children will be hounded to denounce him and to separate themselves from him, as the price of remaining in polite society.

It is also no coincidence that Justice Clarence Thomas’s reputation is being smeared again. It is not just Kavanaugh that is in peril. Throw Kavanaugh to the leftist mob and you grant the premise on which Thomas may be hounded from the Court. This is why I argued Senator Grassley must confront the “Never Trump” Senators, and Senators Collins and Murkowski, with a vote to forward the Senate Committee on the Judiciary’s confirmation records, for both Kavanaugh and Thomas, to the House for impeachment consideration, if Kavanaugh is rejected. They must be made to own the consequences of their actions and inaction before the world.

The two senior Republican men, who matter, have responded, to all the maneuvering, with solid answers. Senator Grassley wrote a strong letter leaving little cover for the four Republicans, who might be looking to stop President Trump’s SCOTUS-changing nominee. The most pointed parts, of the letter, available at the Senate Majority Press page:

Senate Majority Leader McConnell publicly announced Grassley’s hiring of an experienced sex crimes prosecutor, to conduct the questioning of both Dr. Ford and Judge Kavanaugh. “Rachel Mitchell, a career prosecutor [from Arizona] with decades of experience prosecuting sex crimes” will represent the all-male Republican members of the Judicial Committee, improving the audio and visual track on this televised hearing. McConnell and Grassley also nicely played Ford’s lawyer’s “safety” demand by placing the hearing in a room too small for a rent-a-mob audience. McConnell also strengthened his public expectation of Kavanaugh being confirmed. This is all to the good, and we know this, because Ford’s lawyer and the Democrats are howling about both.

It is all to the good, but not good enough to maximize the likelihood of immediate success (confirm the nominee), short term success (get a positive response in the midterms), and long term success (ensure Kavanaugh is not marginalized for years, as Justice Thomas was). We need the women of the Senate Republican caucus, and those campaigning to join that select sisterhood, to stand forth now. They must put steel in the spine, or fear in the hearts, of the would be “Republican” destroyers of the Kavanaugh family: the eggs broken to make a principled conservative omelet, or the sacrifices necessary to maintain the sanctity of abortion.

It will take women to make the point that a “no” vote creates a new, low, and dangerous standard — one that will surely be applied to the families of many others. “Others” include the Republicans who fail to vote “yes.” Senator Flake has already seen a possibly politically motivated prosecution of one of his sons. He, and others, would do well to remember that Senator Packwood was safe for years, as a useful ally of abortion supporters, and then one day he was not. “Conservative” pets of leftist organizations, media or otherwise, have very precarious tenures.

It will also take women to effectively denounce the debasing of #MeToo and sexual assault victims by partisan hacks weaponizing charges to destroy political opponents. Indeed, Anita Hill is sufficiently worried, about the effect of the Kavanaugh hearing on #MeToo, to deny the outcome matters to the movement: “I don’t think any one episode is going to define a whole movement.” Republican women should lead the way, publicly, in redeeming the movement in the Senate. [end update]

I urge every Republican Senator, and those currently contending for that office, to read Senator Margaret Smith Chase’s first shot across the bow of Senator McCarthy’s smear campaign, her “Declaration of Conscience” delivered June 1, 1950.

Between that, and the righteous wrath that Clarence Thomas poured forth, the first great speech of our Deborah, our Thatcher, could almost write itself. I pray for it, along with protection for the Kavanaughs, and the future of our Republic.