The other evening, I approached an intersection as the light turned red. A white Dodge Ram 1500 custom van in the right lane caught my eye. As we slowed, I picked up on the silver and blue-gray swirling details air-brushed along the side, below the passenger rows windows. Instantly, “sin bin” popped into my head, along with memories of road-tripping, to a Lou Reed concert in Munich, Germany.

If “sin bin” does not have meaning to you, consider the following: 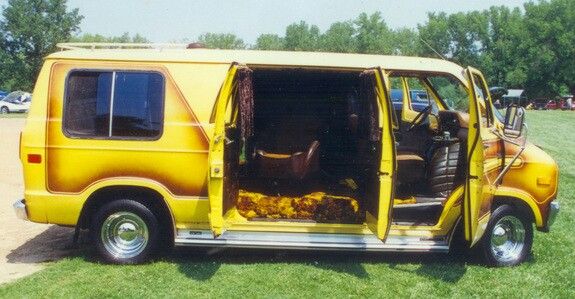 Back in the 1970s and 1980s, the utilitarian van was customized into a rolling bachelor pad. Think shag carpet and at least swiveling captains chairs, if not a bed in the back. The young man with such a van would surely wear his shirt unbuttoned down to there, likely to display heavy gold chains. The rolling party vehicle was thus a “sin bin.”

In the late 1980s, this was already a cliché, and young lieutenants in West Germany drove whatever they brought from the states, or a used local car, or they bought BMW 3 series, Saabs, or Volvos. But, there was that one guy. He took delivery of a new custom van through the Army Air Force Exchange car buying program. We all ribbed him. What would the fräuleins think of this rolling American stereotype?

Then, that same lieutenant announced that Lou Reed was coming to Munich on his New York album tour. Who was up for a road trip? We would have to buy tickets from scalpers to get into the concert. I was not too proud to pile into the van with two other lieutenants and our now very cool friend. We cruised two hours down the Autobahn to Munich in the slow lane. The scalpers were German, so our papers were in order when we entered the venue.

Lou Reed was determined to play the album straight through, as a tale unfolding through the individual song chapters. There is no such thing as an SFW or CoC compliant version of a live Lou Reed performance, but here is a recording of the live New York Album performance recorded for European TV. It is dark but masterful. There were repeated scattered heckling shouts for the old songs, which would not appear until the encore.

I was reminded of Dylan’s defiant performance of his Gospel Tour, which I saw in Seattle at the historic Paramount Theater. Older fans repeatedly shouted “Lay Lady Lay” like “Freebird” at any other concert. Of course, that wasn’t Dylan’s first rodeo with fandom. He had gone through the same, or worse, back when he went electric, “betraying” the folk fans.

The Lou Reed concert concluded and we bought gas for our sin bin chauffeur, heading back to Schwabach, just south of Nuremberg. We were not traveling in the fast lane, but we were going in style. Braking to a stop in the present day, I saw two words painted in a simple script at the bottom left corner of the left rear door: “Family Wagon.” I should think so, in the town with the oldest and largest Mormon temple in Arizona.