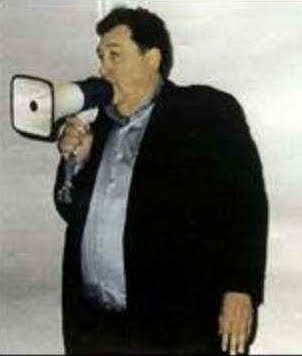 Men of Cornwall stop your dreaming;
Can’t you see their spearpoints gleaming?
See their warriors’ pennants streaming
To this battlefield.
Men of Cornwall stand ye steady;
It cannot be ever said ye
for the battle were not ready;
Stand and never yield!

Rick Rescorla sang this old Welsh song, and others, as he directed the orderly evacuation of 2,687 Morgan Stanley employees from the South Tower of the World Trade Center. They walked down in an orderly manner, as he had made them rehearse regularly. This last photograph of the old warrior leader was taken by one of the employees, whose life he saved on September 11, 2001.

If you have not read his story before, please start with the 2002 New Yorker article. The Washington Post article “A Tower of Strength,” written a month after the attack, is also excellent. You would not recognize him from this grainy photograph, puffy from cancer treatment, but the photograph on the original cover of We Were Soldiers Once, and Young has a young Lieutenant Rescorla in the heat of battle, bayonet fixed. 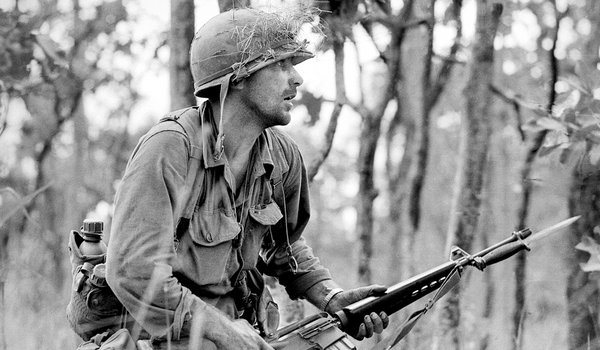 General Hal Moore records that the younger officer, seasoned in wars before his U.S. service, sang to keep his men steady through the night, between bursts of action. This was his habit, as illustrated in an account from a company commander:

It was the summer of 1995. I was a company commander in the 2nd Battalion, 7th Cavalry — George Armstrong Custer’s old outfit — and an audiotape made at An Khe in the spring of 1966 had found its way into my hands. ‘Garry Owen’ is the motto of the 7th Cavalry. The voice pounding through on the scratchy tape was a voice out of the pages of history for me — the voice of Rick Rescorla.

Today, there is a memorial statue at Fort Benning:

The Department of Homeland Security recognizes The Rick Rescorla National Award for Resilience.

The Rick Rescorla National Award for Resilience is the Department of Homeland Security’s (DHS) first national resilience award for superior leadership and innovation by a non-governmental individual or organization who exemplifies the qualities and achievements of Rick Rescorla, emphasizing leadership in effective preparation, response, and recovery in the face of disasters.

Today’s quote is a variation on Men of Harlech, as Rick Rescorla was born in Cornwall, England. You likely heard it in the 1964 movie Zulu, as the handful of defenders sang defiantly in response to the massed Zulu army’s war song. The movie was based on the 1879 Battle of Rorke’s Drift.

That battle could have turned out the same as the Battle of Little Big Horn, alluded to in Gary Owen, but it did not, thanks to well trained troops led by the right young officer. Nor did the battle in the Ia Drang Valley in 1965, fought by a battalion of the newly airmobile 7th Cavalry, thanks to well trained troops and the right officers. Nor did the attack on the Twin Towers, thanks to an old 7th Cavalry officer, who effectively trained and then led Morgan Stanley’s employees to safety. He was last seen heading back up the stairwell to lead other companies’ employees out.