When I was in middle school, my best friend Stephen had a little dog named BJ, who was about the size of a loaf of bread. One day while we were running around the house, BJ was yapping at my heels. I picked him up and kept running, but BJ wanted to be free, so he wriggled out of my hands. He fell to the floor and broke his neck.

Watching the life flow out of BJ’s little body was a childhood trauma that lingers to this day. The fact that it had been my fault was a big part of it, of course, but also that it was simply the most poignant encounter I’d had with death to that point in my life, or indeed for quite a long while afterwards.

In fact, on the whole I’d say my 51 years have thus far been quite remarkably free from the near pain of death. When I consider those many I’ve known who have prematurely lost a spouse, child, parent or sibling–including my dear wife–I am quite fortunate indeed. For whatever purposes, God has chosen to shield me to a great degree from death’s cold touch.

Yet recently I have felt death’s specter drawing nearer, most especially with the untimely passing of a number of friends old and new. In doing so, I have had to grapple with the reality that I have been a poor excuse for a friend, and that my capacity for compassion is severely constrained by both my fear and my addiction to comfort, to a degree that has shocked me and largely shattered my noble self-image.

Fear and death. They go together like peanut butter and jelly.

I recently got a message from someone very close to me, who described the pain of her brother’s deterioration: “Not long I think. He is so afraid. He needs Jesus.”

These words grab at my heart. They convey the torment of a soul confronting the terrifying reality of what lies beyond the veil, and they convey the reality of my life as well. Because you see, it is really not long for any of us, and the fear of death hangs over all of us, though often we hide it beneath a veneer of activities and distractions. We all, therefore, desperately need to know Jesus–now, today–and to cast these deepest fears upon Him. This is true even of those of us who have already declared our love for Him and put our hope in his mercy. It is certainly true of me.

Addiction to comfort. This remains perhaps the most conspicuous evidence of the perniciousness of sin in my life.

My dear friend Bill died recently. Bill was a man with whom I once shared some of the richest fellowship of my life, and with whom I am ashamed to say I barely communicated through his final years. I had spoken with him after he had won an early victory over cancer, but as I began to sense the battle turning against him, I neglected to reach out. Again, it wasn’t hard … I just found other things to do.

The news of his death was therefore not entirely a surprise, which only made my failure that much harder to rationalize away. Had it been unexpected, I could have more easily just chalked it up to the busyness of my mobile military lifestyle. But I had known–or at least suspected–that Bill’s disease may very well return and take him, and I had made no effort. In truth, I had been afraid of what the knowledge would mean to me.

Bill himself faced death with admirable and characteristic courage. He wrote his own obituary, in which he testified to his confidence in Christ and his eternal hope beyond the grave. In fact, had I behaved like a real man and a true friend, I would likely have found myself even more comforted and uplifted by his faith near the end than I had been before. In typical fashion, my proclivity to sin was exposed as both selfish and foolish. 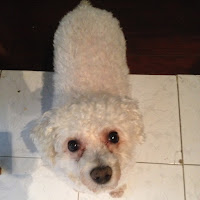 My own little dog Salo also died a few months ago. He lived his final year in the Philippines with my wife’s family, so I hadn’t seen him for a while, but the news still hit me very hard. I was at a business lunch when I got the word, and had to retreat to the bathroom to compose myself. The part of my wife’s message that really tore me up was how her family felt so badly that Salo had died overnight at the vet’s office. He was clearly ill, but they had not expected him to die that night, and felt they would have rather he had died at home, surrounded by those who loved him.

I want to believe I am the kind of man who is likewise driven to be there for those whom God has given me to love, and who is moved to action by the compassion that says, “They should not die alone. I should be there for them.” I want to believe that … but I fear that I have instead become the kind of man who, for want of courage and love of comfort, seems to find somewhere else to be.

Desperate leftists seek to win in November by burning jobs down
10 Likes· Clifford A. Brown