I believe archeologists have found relics in or near Mosul that date as far back as the 25th Century BC. This area has been inhabited — and contested — for a very long time. Iraqi media are reporting that ISIS has destroyed priceless archaeological remains, dating from 1250 B.C., in nearby Nimrud, southwest of Mosul. Iraqi forces recaptured Nimrud yesterday. Nimrud was also an Assyrian city. In 879 BC, the King of Assyria, Ashurnasirpal II, made Nimrud the new capital of an empire that covered much of present-day Syria and Iraq. The Old Testament is, of course, full of references to ancient Assyria.

Mosul itself doesn’t seem to have captured ancient imaginations in the same way, or if it did, the records have been lost. Mosul linked Assyria and Anatolia under the Median and Achaemenid Empires. After its conquest by Alexander the Great, Mosul became part of the Seleucid Empire in 332 BC. Later it fell to the Parthians; then, during the Roman-Persian wars, it fell to Sassanid Persia in 225 AD. Christians lived there as early as the first century; in the sixth century, it became an episcopal seat of the Assyrian Church of the East.

In 637 or 641, depending on the source, Mosul was annexed by the Rashidun Caliphate. I’m not sure what happened between then and the late 9th century, when the city was seized by Turks. In 893, it came under the control of the Abbasid Caliphate; then, in the early 10th century, it became part of the Hamdanid dynasty, who were supplanted a century later by the Uqaylids. The 10th-century Muslim geographer al-Muqaddasi described the city thus:

It is the metropolis of this region. It is a splendid city, beautifully built; the climate is pleasant, the water healthy. Highly renowned, and of great antiquity, it is possessed of excellent markets and inns, and is inhabited by many personages of account, and learned men; nor does it lack a high authority in the Traditions, or a celebrated doctor of the law. From here come provisions for Baghdad, and thither go the caravans of al-Rihab. It has, besides, parks, specialities, excellent fruits, very fine baths, magnificent houses, and good meats: all in all the town is thriving. However, the gardens are remote from the city, the sound wind is noxious, and the level of the water is far from the surface of the ground, so as to make the drawing of it difficult.

In 1535, Suleyman the Magnificent conquered Mosul. From then on, the Ottomans and the Safavids competed for control over Mosul. According to the historian Percy Kemp, the Ottomans considered Mosul “a mere fortress.”

… important for its strategic position as an offensive platform for Ottoman campaigns into Iraq, as well as a defensive stronghold and (staging post) guarding the approaches to Anatolia and to the Syrian coast.

When the Ottomans reconquered Baghdad in 1638, Mosul became an independent vilayet. The Safavids then reconquered most of Mesopotamia, and with it Mosul, in 1623. This was a blip: The city was swiftly reconquered by the Ottomans. During the four centuries of Ottoman rule, Mosul was viewed as the most independent district of the empire. Mosul’s culture was not so much Ottoman as it was Iraqi and Arab. Turkish was not the dominant language.

Dominican fathers arrived in Mosul in 1750, profoundly transforming the city’s social life. Mosul had a large Christian population comprised mostly of indigenous Assyrians. The Dominican fathers and nuns established schools, hospitals, a printing press, and an orphanage; a congregation of Dominican sisters remained in Mosul until the early 21st century.

Throughout the 17th and early 18th centuries, Mosul grew in importance as a stable, well-governed trade route between the Mediterranean and the Persian Gulf. It remained a key center of trade on the Silk Road until the opening of the Suez canal, which enabled goods to travel to and from India by sea.

The Ottomans made their final, fatal mistake when they sided with Germany in the First World War. In 1918, the British occupied Iraq, and with it, Mosul; Mosul became part of Mandatory Iraq. Turkey contested the mandate on the grounds that it had been under Ottoman control during the signing of the Armistice of Mudros. The British believed Mosul’s resources made it critical to the survival of a unitary Iraq. Turks feared that Kurdish nationalism would thrive under the British Mandate and prompt the rebellion of Turkey’s Kurds. The Treaty of Lausanne left the status of Mosul uncertain; it was to be resolved by the League of Nations. In 1926, the League brokered an agreement between Turkey and Great Britain: Thenceforth, Mosul would belong to Iraq. To sweeten the deal for the Turks, the League demanded that Iraq pay a ten-percent royalty on Mosul’s oil deposits to Turkey for the next 25 years.

Mosul seemed destined for modest irrelevance until the late 1920s, when the region’s oil launched it back to prominence. (Oil had long been traded in the region, but during this time it acquired a novel economic significance.) The city once again became central to the region’s trade as a hub for oil transport, via truck and pipeline, to Turkey and Syria.

Mosul was damaged, but not destroyed, during the Iran-Iraq war. After the 1991 Kurdish uprising, Mosul was included in the northern no-fly zone, which was enforced and patrolled by the United States and Britain until 2003. This stopped Saddam Hussein from mounting large-scale operations in the region, but his policy of Arabization proceeded apace. Despite this, Mosul remained home to Arabs, Kurds, Assyrians, Armenians, Turkmens, Shabaks, Jews, Yazidis, Mandeans, Kawliya, and Circassians. 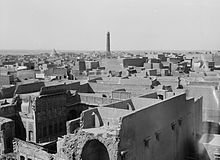 The United States conquered Mosul in 2003.

The Islamic State captured Mosul in 2014.

After more than two years of ISIS occupation, Iraqi and Kurdish forces, supported by an international coalition, launched a joint offensive to recapture the city two days ago.

And so here we are.

Today’s headlines make much more sense to me in this context:

Is protecting Mosul minorities an excuse for partition?

Mosul must be liberated by Iraqis only, say Nineveh tribal leaders

Turkey diplomacy: Aleppo deal with Russia, Mosul deal with US

More Than 100 US Troops Move Forward With Mosul Attack Force

Does knowing this history make it any easier to predict what will happen next?