Things are getting better. Democrats can’t ruin it. Republicans can’t ruin it. Voters can’t ruin it. People are getting vastly richer. Our children will be far better off than we are, no matter how insurmountable the national debt seems to be. Just think about technology. Even if wages stay constant, the things that people buy will get cheaper, and food and energy will continue to be ever-shrinking portions of our budgets.

Morgan Housel wrote an article for The Motley Fool that expresses this perfectly, and has a wonderful explanation for the allure of intelligence surrounding pessimism. Check out this graph (logarithmic, mind you). It’s the ultimate example of “climbing the wall of worry.” 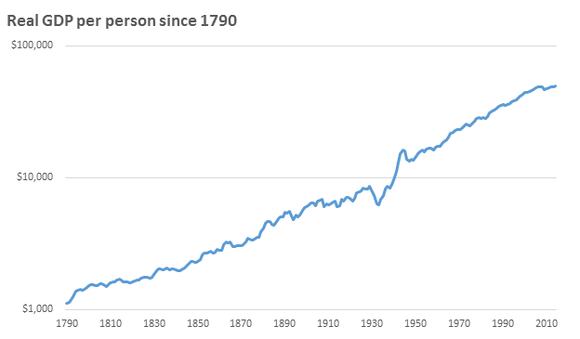 So why are people drawn to pessimism? Housel give five reasons:

1. Optimism appears oblivious to risks, so by default pessimism looks more intelligent. But that’s a wrong way to view optimists. Most optimists will tell you things will get ugly, that we’ll have recessions, bear markets, wars, panics, and pandemics. But they remain optimistic because they set themselves up in portfolio, career, and disposition to endure those downsides. To the pessimist, a bad event is the end of the story. To the optimist it’s a slow chapter in an otherwise excellent book. The difference between an optimist and a pessimist often comes down to endurance and time frame.

2. Pessimism shows that not everything is moving in the right direction, which helps you rationalize the personal shortcomings we all have. Misery loves company, as they say. Realizing that things outside your control could be the cause of your own problems is a comforting feeling, so we’re attracted to it.

3. Pessimism requires action, whereas optimism means staying the course. Pessimism is “Sell, get out, run,” which grabs your attention because it’s an action you need to take right now. You don’t want to read the article later or skim over the details, because you might get hurt. Optimism is mostly, “Don’t worry, stay the course, we’ll be alright,” which is easy to ignore since it doesn’t require doing anything.

5. Pessimists extrapolate present trends without accounting for how reliably markets adapt. That’s important, because pessimistic views often start with a foundation of rational analysis, so the warning appears as reasonable as it is scary.

In reality, the optimists are consistently correct over the medium term. As with the weather, if you don’t like current events, give it a little time and they will change. But chances are the pessimist will have latched on to something new that spells doom for us all.

Don’t be like them. Let the Left worry about the end of the world. Don’t let the election trouble you. Things are getting ever better, despite ignorant people doing everything in their power to stop it.