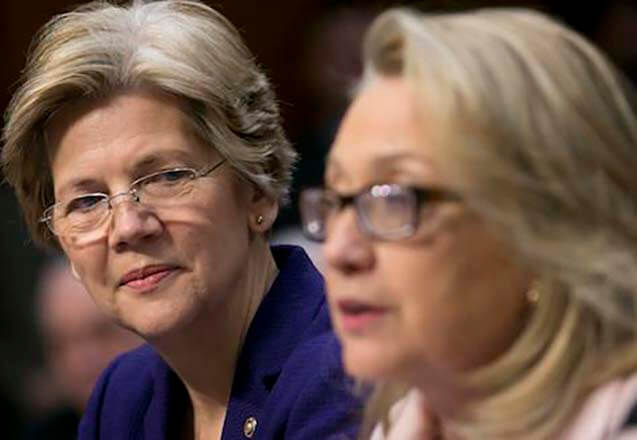 The six-year house party the activist left has been having with the country is coming to an end — and they know it. The death rattle for the antagonistic left began as soon as Wall Street grandmother Hillary Clinton announced her run for the presidency.

When a candidate is nominated for President, the party no longer drags them to their position; instead, it automatically becomes the party of that candidate. That’s why you see Bill de Blasio, Bernie Sanders, Barack Obama and Elizabeth Warren all curbing their enthusiasm. The moment Hillary accepts the nomination, their electoral talking points are for the most part rendered benign — the party becomes a Clinton party again. They also know the same dirty secret the rest of the country knows: Hillary can’t run on class warfare and pop-socialism. Democrats understand that any time Hillary plays class warrior, she falls over her gold-plated walker and hits her Life Alert for the media to bail her out.

With Goldman Sachs’ favorite candidate in the White House and Minority Leader Chuck Schumer in the Senate, Elizabeth Warren becomes marginalized. So does her gaggle of Occupy devotees, at least until she takes over a leadership position, which won’t be for another 10 years at least. Any national political future for New York Sandinista and groundhog killer de Blasio becomes blurry, as does the political clout a former President Obama can take on speaking and book tours.

This doesn’t mean Hillary won’t try to adopt some or even all of Obama’s desperate class warfare tactics. But her ability to successfully make people believe she is a populist champion of middle-class families is laughable at best. Hillary will never be a populist, even if she grinds down her dentures trying to prove it. As evidenced by her tepid campaign roll-out and hiring a flock of Obama alumni, Hillary is attempting to cash in on the pop-culture appeal the Obama brand was so successful in selling. But as we were reminded this week, Hillary will struggle with being herself while trying to be Obama. The search to create a symbiotic relationship between adopting his successes while distancing herself from his failures is already proving disastrous.

Her campaign consiglieri John Podesta was the first to announce she was running. Hillary refused to appear live, instead releasing a short video in which she barely appeared. She launched a website that looks like an ad for a retirement home, and redid her Twitter identity, removing her profile picture in favor of a now infamous, head-scratchingly bad logo. It most reminds people of a hospital sign — not a flattering image for a nearly 70-year-old woman with a history of strokes.

Hillary’s roll-out had everything except a real live candidate. The only proof it wasn’t some elaborate Weekend at Bernie’s prank came when a Chipotle in Ohio released grainy security footage of Hillary Clinton Hearst buying a burrito incognito and avoiding speaking to the everyday Americans whom she claims to champion. I’m not an image consultant, but something tells me you don’t want your candidate — who is already strapped with a 25-year reputation of being legally shady — to have their first campaign appearance looking like a fugitive on a Crime Stoppers advert.

The stop, we were told, was part of a spontaneous road trip to Iowa, an idea that Hillary herself spontaneously brainstormed, in a spontaneous van with the spontaneous name of Scooby that somehow managed to not be photographed by anyone in the media because, remember, it was spontaneous.

Except it wasn’t spontaneous. She did the same thing in 2000 for her New York Senate race. Hillary’s new campaign that isn’t about her and more about listening was caught in a lie within the first 24 hours of launch.

She finally turned up in Iowa at a university auto mechanic shop, an odd campaign choice considering Hillary admits she hasn’t driven a car since 1996. Shortly after, her communications director (Obama White House Alum Jen Palmieri) appeared on Jake Tapper’s CNN show where she struggled to string enough words together to form a coherent sentence on the issues Hillary is running on. It really was quite spectacular:

This was the same comms director, while Hillary was pushing her “middle class” message, is tweeting out photos of the New York skyline from the campaign headquarters in Brooklyn Heights where rents are in the five-to-six digits. I reside in Brooklyn 10 minutes from there; it’s not a middle-class neighborhood, it’s one of the wealthiest in the country. It’s also one of the culturally coolest, which is why they chose it for an aging oligarch of American politics who desperately needs a cool-kid makeover.

And therein lies Hillary’s struggle. She’s making all the same mistakes she’s notorious as a candidate for making, even as she tries to replicate the successes of the only person who’s ever beaten her. No matter how hard she tries to be all things to all people, we were reminded over the past three days that she’s the same Hillary, only older. She can attempt to siphon off Obama’s cool and steady pop-culture popularity by having her daughter appear in Elle magazine or ordering coffee with the hipsters, but Brooklyn Cool won’t relate to middle-class families who watched their median income shrink under the President she served.

The African-American turnout in 2016 won’t be what it was for Obama for obvious reasons along with the the disenchantment they feel with his policies. The youth vote won’t be there for Hillary like it was for Obama, no matter how hard they try to cool her out. Hillary has a choice to be an everyday, average grandmother or celebrity Obama-lite.

She can’t be both and will likely fail at either if she tries.