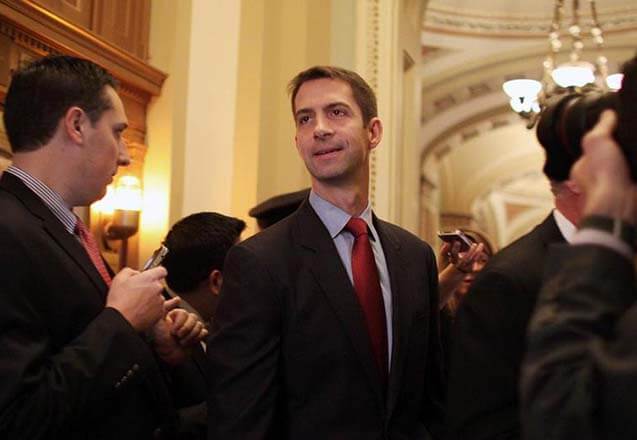 Freshman Sen. Tom Cotton gathered a group of 47 GOP senators to send an open letter to the Iranian regime concerning any potential nuclear deal. The letter warns the mullahs that the deal — especially if not approved by Congress — is likely to be overturned once a new President enters the White House.

“It has come to our attention while observing your nuclear negotiations with our government that you may not fully understand our constitutional system … Anything not approved by Congress is a mere executive agreement,” the senators wrote. “The next president could revoke such an executive agreement with the stroke of a pen and future Congresses could modify the terms of the agreement at any time.”

Arms-control advocates and supporters of the negotiations argue that the next president and the next Congress will have a hard time changing or canceling any Iran deal — which is reportedly near done — especially if it is working reasonably well.

Since “working reasonably well” seems to mean “letting Iran get nukes,” an anti-proliferation President is unlikely to endorse the agreement in January 2017. Democrats are shocked and appalled by the insolence shown by nearly half the U.S. Senate and spared no time condemning their motives and patriotism.

The foreign minister of Iran mocked the letter as propaganda, but the White House found his language far too easy on the evil Republicans. Inaptly named Press Secretary Josh Earnest whinged, “writing a letter like this that appeals to the hardliners in Iran is frankly just the latest in a strategy, a partisan strategy, to undermine the president’s ability to conduct foreign policy and advance our national interests around the world.”

Senate Minority Leader (I love saying that) Harry Reid said “Let’s be clear, Republicans are undermining our commander in chief while empowering the ayatollahs.” The bruised and battered Nevada senator forgot to mention that “the ayatollahs” agree with the White House on the negotiations quite heartily.

Note that this is the same Harry Reid who voted for the Iraq War, then declared it lost while we still had troops in theater. And who can forget House Minority Leader Nancy Pelosi’s cozy summit with Syria’s Bashar al-Assad in 2007, or Minority Whip David Bonior’s anti-Bush meeting with Saddam Hussein in 2002? Imagine the outrage if Sen. Cotton had visited Israel instead of merely writing a letter?

It’s a strange turn of events to have Democrats treating half the U.S. Senate and Prime Minister Netanyahu as enemies of the state while embracing the theocratic, women-hating, gay-lynching, Holocaust enthusiasts in Tehran as trustworthy allies. Valerie Jarrett must really want this Iran deal.