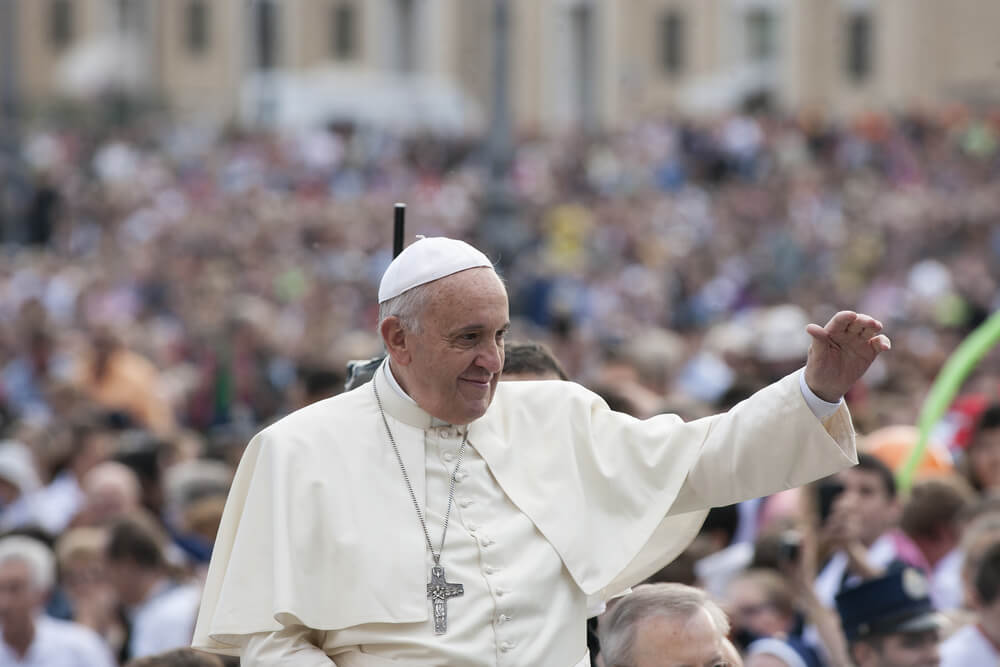 On the day the College of Cardinals elected Pope Francis, many Catholics felt their guts tighten. Jorge Mario Bergolio’s theological beliefs were largely unknown. His roots in South America triggered anxiety, it being the birth place of Liberation Theology with its Marxist philosophy and focus on worldly salvation. Of even greater concern was his Jesuit (Society of Jesus) background. The Society of Jesus has been a problem almost from its inception, and was even suppressed by Pope Clement XIV in 1767, though the reasons are complicated. Jesuit Universities are a hotbed of Marxism with a Catholic flavor; a good many Jesuit professors hold capitalism in utter contempt. (One of my Jesuit professors even told me that Marx was a prophet, but that he never sought disciples. That is the very definition of idiocy). There was great anxiety that Francis would also weaken the Church’s position on abortion and gay marriage.

It took Francis only a few weeks to confirm many of these suspicions. First, he gave the America interview in which he seemed to suggest that Catholic opponents of abortion were motivated by strict adherence to the law of the Church, rather than by a spirit of mercy. I was infuriated at what I took to be a caricature of the pro-life movement. I knew from personal experience that pro-life Catholics love the innocent, and make enormous sacrifices of their time, money, and talents, not just on behalf of babies, but also of mothers who abort and thus ruin much of their lives.

Worse, was the Holy Father’s “who am I to judge” gay Catholics comment. Again, the Pope seemed to say that those who opposed gay marriage were motivated by the law rather than by love. Again, from personal experience, I know few “haters” among opponents of gay marriage. The overwhelming majority of same-sex marriage opponents seek to protect the culture — especially marriage — from the darkness enveloping what they believe is a sacred institution.

The Pope seemed to judge them while telling them not to judge.

Shortly thereafter, the Vatican released Francis’ first apostolic exhortation, Evangelli Gaudium, with its strong language criticizing unfettered free markets. Conservatives despaired and attacked Francis as a Marxist, or at least a social democrat. Rush Limbaugh was apoplectic. Breitbart was sure the Pope had unleashed Liberation Theology. My own anger rose to the level of resentment, even to the point of wondering if, in raising Francis to the Chair of Peter, the College of Cardinals had ignored the Holy Spirit.

My distress was heightened by the Synod on the Family. I was quite certain that this pope was on the wrong side, perhaps even an enemy of the truth.

With Francis’ announcement that he would soon release an encyclical addressing climate change the attacks got personal. Blogging at First Things, Maureen Mullarkey all but declared Francis a heretic, essentially calling the Pope an ignorant, egomaniacal, Marxist lunatic. She came perilously close to calling Francis an anti-Christ or, at least, a dupe of the devil.

The Federalist nearly exploded. Mullarkey again called Francis a leftist. Ricochet’s own Rachel Lu cautioned Republicans about too loudly criticizing Francis, fearful that this would play into the hands of the Democrats. D.C. McAllister responded, quite thoughtfully, that it is not only appropriate but necessary to call the pope out when he says or writes about issues from a leftist perspective.

And, of course, the storm spread to the wider media. The Pope’s conservative critics believe Francis to be an enemy of freedom, while the left praises his critiques of capitalism and wrings its hands over his ardent defense of life and marriage.

The Pope has given everyone a reason to hate him, or at least a reason to see him with a very jaundiced eye.

As the debate continued at The Federalist, I began a post eviscerating the Holy Father. Who, I thought, was the Pope to attack capitalism? Surely he knows nothing about economics, and he really needs to follow in the footsteps of St. John Paul II, and take some classes on von Mises or Hayek. My concern was that Francis was a progressive in sheep’s clothing who would promote leftist policies and thus undercut the progress brought on by economic freedom.

But I had trouble finding the right critical words. I had to go farther before I unleashed my screed. As a matter of charity, I felt that I must read what Francis has actually said, rather than rely on the blather of Rush Limbaugh, or the barrage of criticism directed against Francis by libertarian economists and climate change critics. It was as if, by intuition alone, I felt that something was out of kilter in all the criticism.

I first went to primary sources, Francis’s actual words. My heart warmed a bit, but I still felt a chill from much of what he had to say. My economic liberalism kept getting in the way.

My research took me to an article in The American Conservative entitled A Catholic Showdown Worth Watching by Notre Dame University Professor Patrick Deneen. After reading the article, I took a look at the writings of Michael Hanby, William T. Cavanaugh, and David Schindler. In these and other Catholic thinkers, my mind began to whirl.  Deneen’s article had a particularly acute effect on my thinking. He declares a real war in the Church, but not between “liberal” and “conservative” Catholics, categories that have never been relevant because they are political, not spiritual. Instead, Deneen, argues, the real war is theological and at the very heart of the Church.

Church teaching, he contends, has long been at war with liberalism, whether of the economic or social sort. The Church and liberalism see the world in entirely different ways.  Here, he concludes, is the real battlefield: a fight between liberal philosophy and what Deneen calls “Radical Catholicism.”

The “radical” school rejects the view that Catholicism and liberal democracy are fundamentally compatible. Rather, liberalism cannot be understood to be merely neutral and ultimately tolerant toward (and even potentially benefitting from) Catholicism. Rather, liberalism is premised on a contrary view of human nature (and even a competing theology) to Catholicism. Liberalism holds that human beings are essentially separate, sovereign selves who will cooperate based upon grounds of utility. According to this view, liberalism is not a “shell” philosophy that allows a thousand flowers to bloom. Rather, liberalism is constituted by a substantive set of philosophical commitments that are deeply contrary to the basic beliefs of Catholicism, among which (Catholics hold) are the belief that we are by nature relational, social and political creatures; that social units like the family, community and Church are “natural,” not merely the result of individuals contracting temporary arrangements; that liberty is not a condition in which we experience the absence of constraint, but the exercise of self-limitation; and that both the “social” realm and the economic realm must be governed by a thick set of moral norms, above all, self-limitation and virtue.

The effect of this line of thinking can be shattering. It calls upon Catholics to examine their every belief, whether political, economic, or religious. That’s especially true of individualism. Radical Catholicism challenges libertarian commitments to free markets and capitalism. Catholic economic theologians like Professor Cavanaugh and John Medaille argue for a deeply Catholic understanding of the dangers of unfettered capitalism, suggesting that it can easily slip into a type of Gnosticism and dualism that is at odds with the truths taught by Mother Church.

Most acutely, though, Radical Catholicism prompts a reassessment of attitudes towards Francis. Both conservative and liberal pundits repeatedly quote Francis without digging deeply into why he teaches what he teaches. Social conservatives feel the constant need to explain Francis’s remarks “in context,” often ignoring the totality of what he is saying. Economic conservatives grounded in classical liberalism (especially Locke) should think twice before calling for papal silence on matters of economics. Leftists who praise Francis as a progressive in economics are also called upon to reevaluate their understanding of this Pope. For the fact is that both sides miss the point.

Francis is a radical, but he is no friend of ideology, left or right (he recently laughed at a reporter’s suggestion that he was a social democrat). Francis is continuing the work of St. John Paul II and Pope Benedict, with their call to a return to the Gospel which is grounded in self-emptying love.

Where will this go? That’s somewhat hard to say. Francis is calling on Catholics (and for that matter the entire world) to rend their hearts and their worldly garments. The political ramifications are great. Radical Catholicism calls the faithful away from the liberal project and towards authentic Christianity. This may mean, among many things, abandoning political partisanship, and even a type of retreat from the world through “the Benedict Option.”

All this is the topic of another article. But Francis’s own words may suggest a new path. From his Speech in the Room of Renunciation in the Archbishops Residence:

Put simply, the Pope’s job is to free the faithful from a world of temporary attachments, and to call all men to the greater truth: their Kingdom is not of this world.  Francis’s most sacred obligation is to save souls, and whatever stands in the way of that mission must be rejected. That includes purely secular economics.

That doesn’t make him a socialist or an economic liberal. It makes him a Catholic. And the Pope.