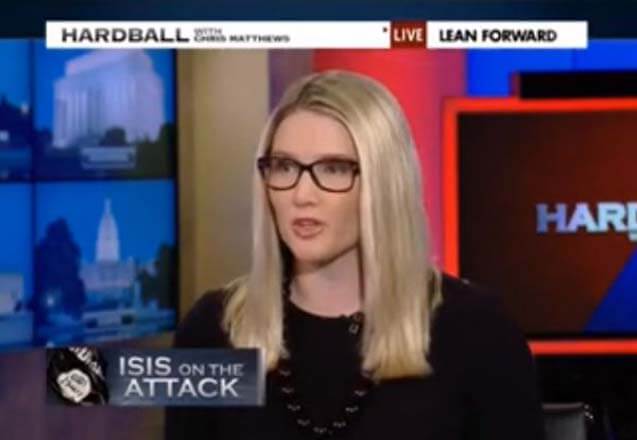 On Monday night, State Department spox and Gap sales associate Marie Harf sat down with Chris Matthews, who asked how the current administration plans to stop the terror. Harf’s response was enough to make anyone go full Scanners: “We cannot win this war by killing them. We cannot kill our way out of this war.” Nazi Germany would have been relieved to hear that, but Harf continued.

“We need, in the longer term, medium and longer term, to go after the root causes that lead people to join these groups, whether it’s lack of opportunity for jobs…” At that point Chris Matthews’ eyes glazed over, but Harf kept at it:

We can work with countries around the world to help improve their governance. We can help them build their economies so they can have job opportunities for these people. You’re right. There is no easy solution in the long term to preventing and combating violent extremism. But if we can help countries work at the root causes of this? What makes these 17-year-old kids pick up an AK-47 instead of trying to start a business? Maybe we can try to chip away at this problem, while at the same time, going after the threat; taking on ISIL in Iraq, in Syria, and helping our partners around the world.

It isn’t a new revelation that Harf and this administration believe that the war against ISIS is not a war against terrorism, so this isn’t just a minor slip. She was revealing the Obama Administration’s only strategy for combating Islamists. Obama’s response after the massacre of Charlie Hebdo cartoonists was to call for a community summit to combat violent extremism. This administration is convinced that the road to defeating radical terrorism is no different than standing on a street corner with a clipboard.

The White House believes that poor, angry kids join ISIS because they don’t have jobs or economic opportunity and that somehow, if only the countries where fighters are radicalized and recruited had a banana stand or a mall in which to work, ISIS would cease to exist. This is an administration that, as Dan McLaughin of Red State put it on Twitter, “doesn’t believe in nation building but believes ISIS can be defeated by nation building.”

They believe this because Obama has spent his entire professional career community organizing a poor, angry populace who feel they have been wronged by an unfair economic system. Obama thinks ISIS exists in the same bubble of society that is angry about their hourly job at McDonald’s; burying children alive and torching people in a cage is just their way of expressing frustration. But ISIS doesn’t exist in Obama’s world of class warfare — they operate outside of it. This administration fundamentally misunderstands ISIS’ beliefs because they themselves do not possess a core belief structure. Team Obama wants to community organize the world in order to shame Islamists into submission, because it’s the only thing the person in charge knows how to do. Obama thinks all ISIS wants is a living wage and some free birth control. But you can’t fight terror with Alinsky tactics. You can’t shame ISIS with class warfare because the structure in which ISIS believes isn’t based on economic class.

ISIS doesn’t care about capitalism. They don’t care about the electric company turning off their power or a garbage service refusing to pick up because of unpaid bills.

Harf and the administration are trying to write off ISIS as a product of poor economics when their entire belief structure isn’t based on capitalism. She flippantly describes ISIS fighters as “17-year-old kids who pick up an AK 47 instead of starting a business,” but ISIS isn’t recruiting fighters from the slums of southside Chicago. They are recruiting from mosques, academia, high technology, and the wealthy. ISIS doesn’t care about a living wage or whether HealthCare.gov is working. They don’t promote on performance; they promote on loyalty to the cause.

Obama has backed himself into an ideological corner by ruling out ground troops to defeat embedded ISIS strongholds because six years ago he ran on stopping war and withdrawing troops. The President is trying to defeat a brutal enemy the only way he knows how: by community organizing them to death. It is not going to work. ISIS will not be eliminated if instead of dropping bombs on their heads, he drops job applications.

Obama is the one constant in a world falling apart. He falls back on the only thing he knows how to do. The problem is that Saul Alinsky’s instruction manual doesn’t have a chapter on how to handle Islamic caliphates.