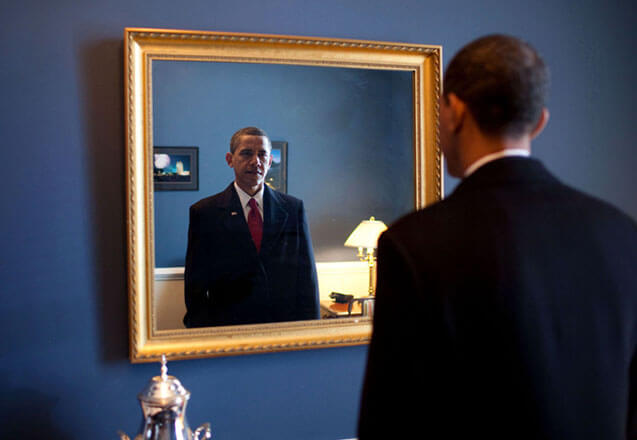 A few days ago, in India, Barack Obama gave a three-minute speech in which he referred to himself 118 times.

That speech is emblematic of his entire administration. Nearly all of his speeches have been exceedingly self-referential. All Presidents are to some degree full of themselves. Had they not been so, they never would have made it that far. But when it comes to vanity, Barack Obama takes the cake. The whole enterprise has always been about him — and no one else — which helps explain the astonishing damage he has done to the Democratic Party. The way things are going, if he were allowed to run for a third term and won, he might be the last Democratic officeholder left — which would, I suspect, suit him just fine.

Thanks, in part, to the self-absorption of their standard-bearer, the Democratic Party now controls fewer Congressional seats than at any point in my lifetime. Its presence in the Senate is at a near-record low, and one would have to go back nearly 90 years to find a time when it was in as bad a shape in the state assemblies and senates.

One consequence is that the party is bereft of fresh blood. Think about it. The minority leader in the Senate is 75; the minority leader in the House is 74. Her immediate underling (Steny Hoyer) is also 74. It is true that Mitch McConnell is 72, but he is the exception to the rule among Republicans. John Boehner is 65, and he has plenty of associates well-known in the country who are considerably younger. Think about it. Can you name a bright, young, up-and-coming Democratic Congressman or Senator?

And consider this: the likely Presidential nominee of the Democratic Party will be 69 in January 2017 (older than Ronald Reagan was when he became President). Her likeliest rival, Joe Biden, will be 74; Jim Webb will be 70; and Elizabeth Warren, who graduated from Northwest Classen High School in Oklahoma City one year before I did, will be 67. As Jay Cost points out, if Hillary Clinton now anticipates no challenger, as seems to be the case, it is because the bench is empty: there is no one capable of mounting a serious challenge.

This time it looks as if the roles will be reversed. Hillary Clinton is the Democratic Party’s answer to Bob Dole and John McCain. The only thing really impressive about her is that she still has a pulse.

Barack Obama, Harry Reid, and Nancy Pelosi are responsible for this situation. They not only lead their party over a cliff. In the Senate, Harry Reid prevented votes and quashed debate. The chief consequence is that, in the last six years, only one Democratic Senator has managed to make a name, and she did this — not while in the Senate but while running for it. If there are any young Democrats in the Senate with the energy and intelligence of Rand Paul, Ted Cruz, Mike Lee, and Marco Rubio, none of us have heard anything about them; and there is a new crop of Republican heavyweights — including Ben Sasse and Tom Cotton — who may put these four in the shade.

The Democrats can find no solace in the state houses. Andrew Cuomo, who will be 59 in January 2017, is under a cloud and may soon be facing corruption charges. Deval Patrick, who will be 61, and Martin O’Malley, who will be 54, are history. Though they were Governors in the bluest of blue states, their records were repudiated when the voters of Massachusetts and Maryland elected Republicans to succeed them. The only Democratic governor who is  in any way distinguished is the current chief executive of California, and he will be 78 in January 2017. And frankly Governor Moonbeam is friskier and more interesting than Hillary Clinton, Joe Biden, Jim Webb, and Fauxcahontas. The Democratic Party really has become the Party of the Living Dead.

The only presidential contender that the Republicans had who could compete with the geriatric set was Mitt Romney, who is a tad older than Hillary Clinton, and he has now bowed out. All of the remaining Republican contenders are younger than Lieawatha.

For the first time in memory, the Republican nominee will be younger than his Democratic counterpart — and, at a time when the public is unhappy with the direction the country is going, that matters.

If, for example, the Republican Party were to nominate Scott Walker, it would have a real advantage with younger people. Hillary Clinton demonstrated at the time of her book launch that she is past it. Presidential candidates have to be quick, nimble, and affable. As became clear in her interview on Fresh Air, the Lady Macbeth of Little Rock is now slow, brittle, and petulant.

None of the prospective Republican nominees can be described in that fashion. We can quibble about their qualities, and we will. What cannot be denied is that everyone I have listed is extraordinarily talented.

If one of the younger Republicans — preferably, a governor or former governor, someone from outside Washington, someone with executive experience, someone with energy and a winning smile — proposes a sharp change of course, repeatedly denouncing “the tired, old, failed ideas of the Democrats,” the Republicans will not only win. They will win a mandate.

What we do not yet know, what we need to know, is whether any of the Republican candidates understand that the present discontents are systemic — that they derive not from the failed policies and administrative incompetence of a single man, a single administration, a single party, but from the propensities inherent in the administrative state itself. Most Republicans are managerial progressives. They suppose that all that is required is managerial competence.

That we suffer from managerial incompetence there can be no doubt. All that one has to do is think about Obamacare and one will see that.

But I believe that we face a far greater challenge — a political challenge, one that cannot be overcome by a technical remedy — and I am not at all sure that the likes of Jeb Bush, Mike Huckabee, and Chris Christie recognize that the inexorable growth of the administrative regulatory, welfare state is itself a threat to our capacity to govern ourselves.