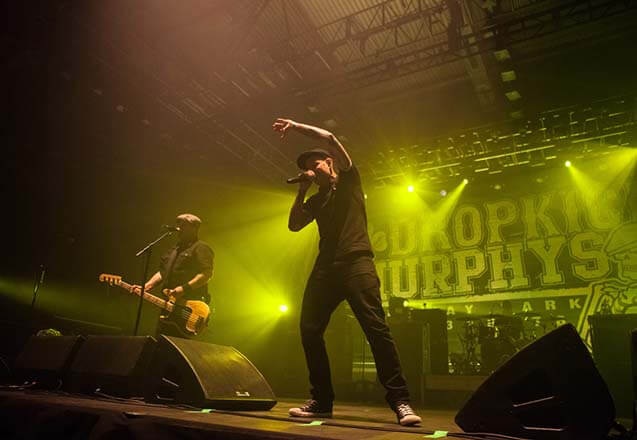 As Gov. Scott Walker took the stage at Saturday’s Iowa Freedom Summit, a Celtic-tinged rock tune blared through the speakers. The song pumped up the crowd and garnered a few compliments on social media.

Campaign walk-on music usually consists of patriotic standards, inoffensive baby boomer nostalgia, or “Beautiful Day” by U2. (If C-SPAN paid ASCAP fees, Bono & Co. would own the network by now.)

Walker’s team (or event organizers) chose the intro to “I’m Shipping Up to Boston” by Irish-American punk band the Dropkick Murphys. Even if you don’t recognize the song’s title, you’ve heard it a zillion times on ads, sitcoms and at sporting events.

Looking back, the choice was somewhat subversive since it’s a cover version of a tedious old Woody Guthrie standard. Considering Walker’s famous battles with out-of-control government unions, it could have been a subtle dig at labor’s heroic narrative, though I doubt anyone thought that deeply about it.

Conforming slavishly to stereotype, the Dropkick Murphys are boring lefties who get offended when non-approved people enjoy their derivative tunes. The over-the-hill band bravely took to Twitter to react precisely as everyone expected:

The last time I saw the words hate and love so close together they were tattooed on Robert De Niro’s knuckles. No one ever mistook the band for competent writers (just look at their lyrics), but they got their message across: We are offended by people different from us.

For his part, Walker had no comment, because what’s the point, really? Pretty much every song a conservative chooses outside of the Oak Ridge Boys or Lee Greenwood is going to get a rise out of the people who recorded it. Bruce Springsteen whined when Ronald Reagan played “Born in the U.S.A.” John Mellencamp and Sting asked George W. Bush to stop playing their songs while Tom Petty filed a cease-and-desist order. Living up to his name, Petty also freaked out when Michele Bachmann used “American Girl,” and almost every song chosen by McCain/Palin made the musicians squawk.

This reaction has always confused me. If somebody compliments my work, I don’t demand to see their voter registration before thanking them. If someone on the other side likes an article of mine, I consider it an unexpected win. No musician is actually offended by praise; he just wants to show the rest of his progressive tribe that he’s as much of a boring conformist as they are.

For Walker, et al., I recommend they just ignore the whining. Let the pampered artists kvetch while the candidates focus on the voters. And, by the way, would it kill you to play some Ramones?