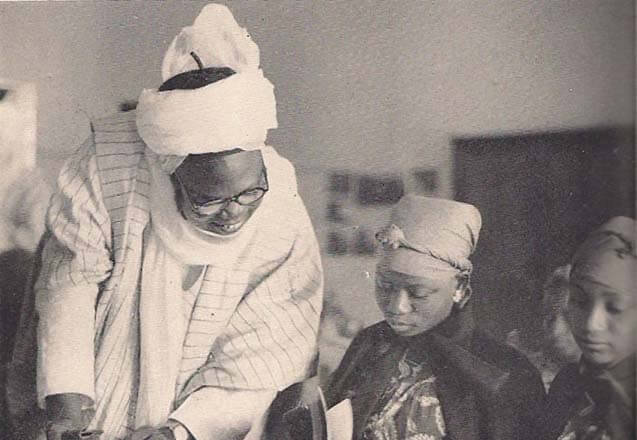 Almost half a century ago today, on January 15, 1966, two of my family’s dearest friends were murdered.

Alhaji Sir Ahmadu Bello (pictured above) was the Premier of Northern Nigeria and Sardauna of Sokoto.

Alhaji Sir Abubakar Tafawa Balewa (ATB) was the first (and so far only) Prime Minister of a Nigeria that had achieved its independence from Britain on October 1, 1960.

Both men had come to their political careers after training for, and teaching in, Northern Nigerian schools, but their backgrounds were very different. ATB was a “commoner,” and not part of the ethnic or religious hierarchy of the North. Sardauna was from ethnic royalty, a member of the family of heirs to the large Sokoto caliphate.

Both men were bright, articulate, and spoke flawless English. ATB was a serene man of immense personal dignity. Sardauna was ebullient and jolly, although he was shy and could be standoffish or brusque with strangers. Both men were Northerners to the core, and had dedicated themselves to bridging divisions among the Northern ethnic groups and to keeping the large Northern region’s controlling interest in the national political system. Doing so proved difficult for many reasons, and probably had a direct bearing on later events.

Each man was devout in his religious observances, and both had completed the Hajj to Mecca, as indicated by the title “Alhaji,” which always preceded the one given them by Queen Elizabeth when she invested them both as Knights of the British Empire.

Sardauna, and his head wife, were shot in a massacre at their home.

I don’t know where ATB was when he was shot. His body was left by the side of the road and found six days later, having been chewed upon by (one can only hope, in these circumstances) wild dogs.

I was enjoying the Christmas break from my boarding school in Malvern at the time, and I remember my mother sitting on the stairs at our home in Worcestershire, listening to the news on the radio with her head in her hands and tears streaming down her face.

I remember the solid silver ring that Sardauna had made as a gift for her. There were two of them cast. One for my mother, one for Sardauna. Then the mold was broken.

I remember Sardauna jabbing my father playfully in the ribs and telling him that I, at the age of about seven, already spoke better and more fluent Hausa than Dad (a huge exaggeration, but one which made the two of them roar with laughter and my heart swell with pride).

I remember understanding that both men had been killed in such a way that made it harder to fulfill the ritual funeral observances of their religion.

I spent almost all of the first nine years of my life in Northern Nigeria, in and around towns with names that resound today to anyone who follows the news—Maiduguri. Kano. Mubi (where my sister was born). Gwoza. Kaduna. Sokoto. Biu. Numan.

My father administered large swaths of the country on behalf of the British Colonial Service until Nigerian independence in 1960. He then stayed on for almost another three years, working for the Nigerian government itself, with a mandate to clean up some rather unsavory doings by an influential regional chieftain. Dad’s work resulted in said chieftain ‘abdicating’ and going into exile, after which we stayed in Nigeria for a few more months before returning to England, and then moving — permanently in my case — to the United States.

I remember my early childhood as idyllic. I suppose we were the ‘oppressor’ in a strange land. We had servants, and the servants were Nigerians. Dad was doing the work of the imperialist Brits.  The natives were supposed to be seething with resentment

But I saw none of that. No doubt there were colonial administrators who regarded the Africans as inferior and their own jobs, with their heel on the natives’ throats, as somehow divinely inspired. But my father wasn’t one of them. And he didn’t teach his children those things either.

I only remember, with love and respect, my friends.

Ahmadu, and his chief wife, Gwama, who traveled with us from place to place, who kept the house in order for us, and who were always ready for a game of hide-and-seek. Yusufu, only a year or two older than me, who taught me how to climb trees. Amina, the daughter of Ahmadu and Gwama, who was particular friends with my younger sister. Adamu, the rather eccentric cook, who always had a lit cigarette dangling from his lip with the ash about to fall off, who made the most spectacular bread in a wood-fired oven, and who also did wondrous things with the mangoes and paw-paws that we picked off the trees growing in the garden. Gabby, who worked in that garden, and Ango, who saw to  the horses.

(My father, who had been in Nigeria since 1948, brought my mother out as a new bride in 1950, to a little house in Katabu. Shortly thereafter, it burned to the ground, a victim of an out-of-control fire that spread from a prison gang’s efforts to clean up the roads and burn the resulting brush pile. My parents were on ‘tour’ throughout the region at the time, but Dad never tired of telling of Ango’s bravery in rushing headlong into the burning building, heedless of his own personal safety, to retrieve what he thought Mum and Dad would regard as the most valuable object inside–the mosquito net that covered the bed).

I remember their laughter, their kindness, their hard work.

I remember their love of children, and their horror when my mother spoke sharply to one of us, or corrected our behavior in a way they thought was too harsh.

Of course, some space, and some time, had to be allocated  for our friends’ religious observances.

I remember, the year after independence, attending the Kaduna Capital School (for the equivalent of second grade). The teachers (both men and women), and my classmates (both boys and girls), were almost all Northern Nigerians, and almost all, Muslims. I felt very much at home.

(Two years later I learned what it was to be a fish out of water when my teacher at Edward Devotion School in Brookline, Massachusetts, sniffed and made a disparaging comment when I told her how I’d been schooled up to that point. A few weeks later she deposed me from my office as class ‘secretary,’ to which my new fourth-grade schoolmates had elected me, because I’d had whooping cough, and had missed a couple of weeks of school. She appointed her favorite in my place. As must be evident by now, I’ve never forgotten her meanness of spirit towards a little girl who was desperate to belong in what was, to her, an alien land).

And I remember an entire cavalcade of tribal leaders and government officials who dropped in and out of the house at all hours of the day and night, sometimes openly, sometimes oddly surreptitiously.

Some came for the parties that my mother organized. I may be the only person still alive who remembers the ‘Emir of This,’ the ‘Waziri of That,’ and the ‘Sultan of The Other,’ enjoying hearty games of Charades and Pin the Tail on the Donkey, laughing uproariously, and dancing cheek-to-cheek with my mother, to music (Glenn Miller and Guy Mitchell were particular favorites) played on the old blue wind-up gramophone.

Of course, no alcohol was served.

When I was three, in a ceremony that followed local ritual and custom, Sardauna formally adopted me. I had already been given a Hausa name ‘Hawa (the Arabic word for ‘Eve’) Numan,’ named for the Nigerian town in which my father was stationed when I was born. In 1957, my father was engaged on one of those ‘difficult and dangerous’ jobs, and Sardauna wanted everyone to know that the family was under his protection in case something went wrong. Seven or eight years later, when the above-mentioned, extraordinarily unhappy and bitter, exiled chieftain put it about (falsely) that he’d had Mum and Dad killed in a car crash in England, Sardauna was one of several people who contacted my grandparents to make sure that someone was taking care of me, and of my three-year old sister.

At the time of their deaths, Sardauna and ATB were the most powerful men in Nigeria.

Were they perfect? No, they were not.

Did they conform in all ways to our ‘enlightened’ Western ideals and beliefs, and might we find some of their views problematic today? No, they did not, and yes, we might.

Would Nigeria have prospered over the last half-century if they had lived? I don’t think it’s possible to know.

But I do know that the Northern Nigeria of the early 1960s was a place in which slavery, and most of what we regard as the more barbaric aspects of Sharia, had been all but consigned to the ash heap of history, one in which the traditional was beginning to meld, peacefully and effectively, with the modern, and one in which all the young country’s young Muslim citizens, both male and female, were enthusiastically encouraged in their education by the two most important Muslim leaders in the nation, the Sultan, and the Sardauna, of Sokoto.

And I’m certain that both Sardauna and ATB would have been horrified by the events in their beloved North today.

While Dad enjoyed a close friendship with both men, he and Sardauna forged an almost brotherly kinship that continued, after we left Nigeria, through a lively letter-writing exchange that ended only a couple of weeks before Sardauna’s death (the last letter Dad received from him, in December of 1965, was written on a Christmas card.  Ponder that).

Shortly thereafter, Sardauna, along with his good friend Abubakar Tafawa Balewa, was murdered.

Because they were Muslims?

Many believe so. It was a fact, widely reported at the time, that their assassins, members of the Nigerian Army, were not.

What is indisputable is that the events of January 15, 1966 set in motion what was to become the Nigerian Civil War, continued through what was perhaps the world’s first real-time, socially-networked ‘humanitarian crisis’ — the Starving Biafran Children — and eventually led to the basket-case nation that is Nigeria today.

And we could argue vigorously about what happened, why it happened, who was responsible, who interfered and why, and whether things could have turned out differently. That is a fight that I am almost always willing to pick, and rarely back away from if others start it without me.

Today, I remember my friends.