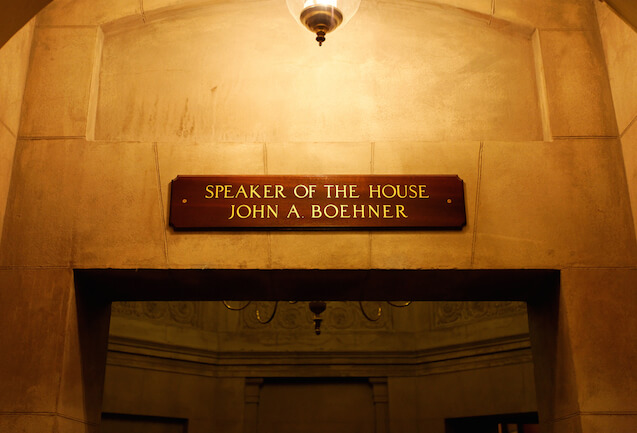 Watching this year’s version of “Will Boehner Fall?” was just painful. Yes, it consumed a little media attention and a lot of Twitter traffic in the last couple of days, but the outcome was always certain: by the end of the process, John Boehner was still Speaker, and conservatives were, for the thousandth time, wondering why they couldn’t beat a man they so profoundly dislike.

I can say this until I’m blue in the face, but winning this type of inside-the-Beltway fight means running the right campaign, not the one in your head. It means having a plan, because (also, until I’m blue in the face) a plan beats no plan, every time. It means telling a story that influences your actual targets, not the people who already love you. Sure, talk radio, conservative Twitter, and the activist groups revved themselves up, ran at the brick wall, and slammed into it hard enough to cause a concussion in the last 48 hours, but — as usual when it comes to the DC establishment — conservatives played the game wrong.

The interior culture of the House is characterized by an obsession with ego, position, power, and the financial goodies that committee positions and leadership favors bring. John Boehner had to hold his numbers, and had tools in the toolbox to do so. Are you angry that some of it was outright bribery in the form of commitments for spending in home districts? Tough. Way it goes. Does it enrage you that he promised some members choice committee assignments, or threatened the removal of others from plum spots? Tough. Way it goes. If you’re going to fight political battles, fight them on the terrain on which they actually exist, without emotion or heroic visions of your own righteousness.

Boehner also understands that the majority of our majority aren’t fire-breathing warriors; many are backbenchers — solid, decent conservative members who aren’t in Washington for the wrong reasons, but who aren’t going to set themselves on fire for the movement. They’re not squishy RINOs (this is the most conservative caucus in history) but they are of a more practical bent. Boehner has a lot of experience in what kind of goodies can be handed out, and knew how to play those folks like a fiddle.

First, they chose the wrong candidates. Louie Gohmert? Ted Yoho? As amusing as both are, neither evoked a sense of leadership around which most members could rally. (Danny Webster, on the other hand, would have made this a very different race.) Gohmert should have outlined how his committee assignments would look to swing members and made lavish promises about how he would take care of his supporters. He should’ve described for them a path to victory on vital issues, and helped them understand how he’d make their political fortunes better, and how he’d be there for their reelection campaigns with resources and support. That’s cynical, and it’s disappointing for purists, but it’s real. The rebels sold the wrong product in the wrong way.

Instead, the message promised a Rain of Fire on Obamacare, Benghazi, the border, and other red meat. The issues that move votes for conservatives are not what moves votes in an election for House Speaker. This isn’t to say that Boehner’s more squishy, ideologically mushy agenda (“Yay! Tax extenders! Yay! Keystone!”) is any great shakes, but for a lot of conservative members, the fear was the moment after Boehner lost would be the moment we started doing nothing but back-to-back-to-back hearings on everything their voters don’t care about while ignoring the things that move them.

Second, the staff culture on the Hill is deeply insular and interconnected. When a new member takes office, they’re not bringing their team to Capitol Hill. Oh, a couple folks will come from the campaign, but the leadership helpfully suggests who they should hire for many of their key positions. The complex web of loyalty, obligation, and interests would make a fascinating data-analysis project, but many staffers have, to put it mildly, mixed agendas. They were whispering things into the ears of even the most conservative members like, “Hey…let’s not piss off the leadership, we promised to finish the Highway 12 overpass in the transportation bill and my friend on the committee told me if we don’t support John there might be a problem.”

Next, if you think “melting the Congressional switchboard” works, prepare for disappointment. I wish they were more responsive to their constituents, but your call is getting answered by an intern, noted down on a contact form, and ignored. It can work on legislative fights, but this wasn’t legislative; it was political. It wasn’t just political; it was intra-caucus political. This fight was settled by a few men and women in whispered conversations in Congress, and external pressure made no difference.

Finally, their operational security was worse than Sony’s. Boehner’s team knew about this plan weeks in advance, and took steps to mitigate it immediately. If you’re plotting a coup, don’t tell the regime “We’re attacking the airfield and the radio station at midnight with 60 men.” Lack of message discipline kills this kind of plan. If it had been held in a tighter circle, the shock of the coup would have prevented Boehner and his team from taking the steps they did to kill it, rallied conservatives in a quick floor fight, and made it more viable. It’s not a secret if it’s in Politico, folks.

I frequently regret that conservatives are not naturally good at either planning or conspiracy, so I hope you’ll understand I’m not telling you this to praise the process or endorse Boehner. I’m telling you this so you don’t waste energy, time, and passion on quixotic fights without a plan, a viable candidate, or a message that works. One of my favorite World War II propaganda posters is a simple pencil sketch of Winston Churchill’s scowling visage. Beneath it, in bold type are two words: “Deserve Victory.” In the effort to unseat Boehner, House conservatives and their allies didn’t mount a serious enough effort to deserve the win