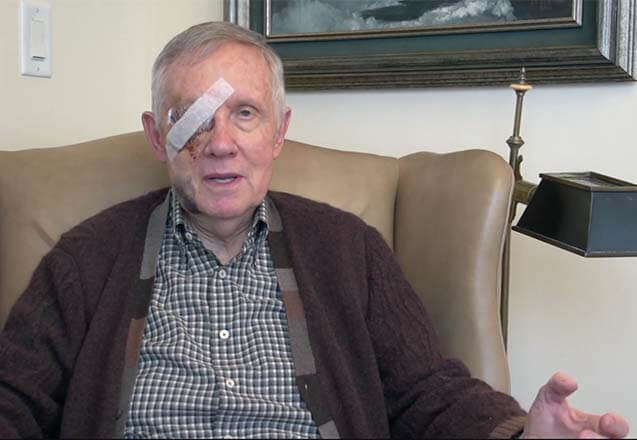 THIS IS A RUSH TRANSCRIPT. THIS COPY MAY NOT BE IN ITS FINAL FORM AND MAY BE UPDATED.

SENATE MINORITY LEADER HARRY REID (D–NEV.): Is the camera rolling? Because… oww, my eye… um, because the last time I gave my whole spiel but you never pushed the button thing on that iBerry pod and…

So, we’re taping now? I don’t see a red light like on the TV. Sid Caesar always said to wait for the bulb to heat up before you started talking.

Hello to everyone in TV land. As you know, I used to be a fighter back in the old days, boxing fellas like Paddy Houlihan, “Wallops” McGinty, and Bruno “By Jove” Jorgensson. But I’ve never faced a tougher opponent than this treadmill gizmo I tried out over the new year break.

After finishing my bran scone and daily constitutional, I stepped onto that infernal contraption Charlie Schumer gave me for Christmas. All those bells and whistles might make sense to a young scrapper like him, but I tried walking on it for a quarter hour before my great-grandson said I had to turn it on. Why, when he clicked that darn button, it gave me the start of my life! I couldn’t tell you how many lights and screens and what-not flashed up in my face.

When I woke up, I was in my reserved suite at the University Medical Center in Las Vegas with my doting wife and family at my side. Did you know I have 19 grandkids? There’s, uh, Dodie and Lindy and Jacob… no, Joshua… oh, I can’t recall all their names just now. Where was I?

Are we filming this? [unintelligible]

Well, I told my wife that maybe the exercise machine was made by the Koch brothers. You might laugh at this allegation, but they are a terrible scourge spreading cronyism and corruption that will poison our democracy. My press office has the details.

Sen. Schumer must have thought it was funny when I blamed them. I got him on the horn to explain the accident but he just kept laughing. Kept telling me not to rush back to Washington and rest for the next few months. I told him I was homesick, but he said, “I’ve got it handled.” I told Durbin to keep an eye on that guy until I’m back on the Senate floor.

Dick and I have had some times, I’ll tell you what. Back in the budget battle of ’97, we locked Barbara Mikulski in the ladies’ cloakroom for almost two hours. You know that look she gets when… [unintelligible] when she… [unintelligible]

Okay, I’m the minority leader now but that doesn’t mean the Senate Democrats are dead. I’m working on all sorts of legislation to improve the lives of my fellow Nevadans. I’m introducing a bill to protect all the pretty grass areas around the Capitol from roughhousing kids and noisy tourists. Also, I’m proud to announce we’ve got a new shipment of ribbon candy for my front office. Doc said to make sure I increase the circulation to my legs so maybe I’ll see some of my constituents when I’m walking through the hallways. Security is usually good, but you never know!

As you can see, our plans for 2005 [unintelligible] …2015 are going to be big. I may have a black eye, broken ribs and… um, a banged-up face. Is it cold in here? I’m feeling a draft… thanks… my great-great-granddaughter kitted this blanket for me the last time those Sicilian… um, the last time I had an exercise accident. The exercise accidents happen a lot to me now.

So, message received, guys. I mean the guys who… in the hospital. The hospital guys.

Whew, that was close. You turned off the camera, right? Got a little distracted, but I think it… you haven’t turned off? Well, turn it off now. And get Dick on the phone. We need to talk before my morning nap.