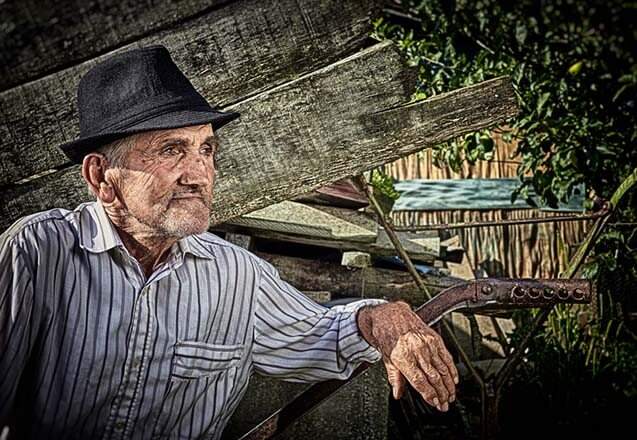 Thoughts along those lines used to cross my mind quite a lot when the Booths and Daytons and Birchards and Balls were all still alive—these would be my mother’s parents and their cousins.  They had been born before the turn of the last century and spent much of their lives on dairy farms, the men awake at four every morning to milk the cows, the women awake not much later to chop the wood, start the fire in the stove, and cook breakfast. (My grandmother refused to permit my mother to touch an ax. She wanted my mother to have an easier life than she’d had, and she believed that if she never taught my mother how to chop wood, then my mother would never have to chop wood. It worked. More than a dozen young men proposed to my mother before she married my father, but none was a farmer.) By the time I knew them, many of these old people had developed a peculiar hitch in their walk or stiffness in their hips. Instead of walking erect, they all bent at the waist, leaning forward a couple of degrees as if making their way into a good strong wind. Why didn’t they pay more attention to their posture? I knew, of course, that they had all led hard physical lives, but still. Didn’t they ever look at themselves in front of the mirror? Couldn’t they stand up?

You can see where this is going, I suppose. Meeting a friend in downtown Palo Alto for breakfast just yesterday morning, I got out of the car, and, halfway to the bagel shop, caught a glimpse of myself in the plate glass window of an adjoining store front. There I was, bent at the waist, leaning forward a couple of degrees. I stopped, drew myself up, getting the kink out of my back, and walked especially erect for the rest of the day, so much did that glimpse of myself in the storefront startle me. I’d turned into a Booth or a Birchard. I’m still young enough to shake myself out of it and correct my posture. But for a moment I’d become one of them. If only in a small way, that realization represented a moment of enlightenment, of increased understanding. Although I’d never made a big deal of it—I’d never actually spoken to any of those old farmers about standing up straighter—a little voice in the back of my head had judged them remarkably harshly. Now I could replace that harshness with a certain compassion. A lot of stuff just happens to people, I saw, and in our family—who knows why?—we seem to have a certain predisposition to an odd walk. If the predisposition shows up in me—I, who have done desk work all my life—then to those old people it must have represented a kind of inescapable genetic sentence. Work on a farm all your life, inherit the genes they’d inherited, and by the time you’re in your seventies you’ll have lost any ability to straighten out that hitch in your giddy-up.

Because of that brief moment of reflecting on my family—of grasping that, as I put it, I’m one of them—I think I’m a slightly better person. I’m slightly more—well, understanding. And in this difficult world, even tiny improvements in character and compassion count for something, don’t they?

Which brings me to a holiday question.