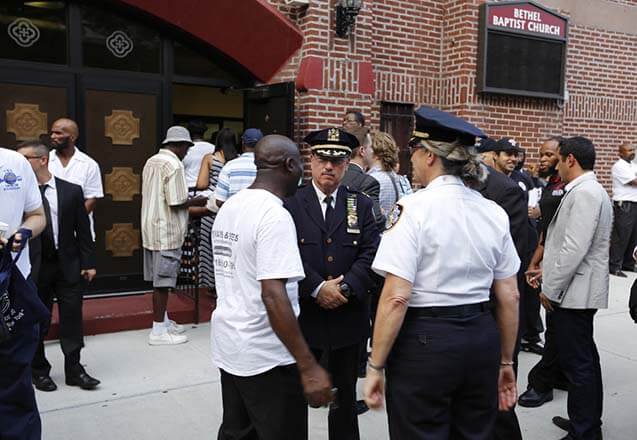 While a farce at that moment, this may finally develop public trust in a necessarily confrontational, unpleasant and occasionally violent service. Harsh nuances cannot be appreciated by outsiders who don’t worry about the number of ways cops can die. Thus, outside change is exceedingly difficult to implement. So, let’s let people who don’t trust cops become trustworthy police.

The mechanism to do this is already in place: Reserve policing.

Almost every law enforcement agency has reserve or auxiliary officers. These are, essentially, part-time cops — often volunteers — working roughly two shifts per month. Reserve officers are either fully trained and certified or less trained but with commensurately restricted duties and supervision. Often, they ride along with a full-time officer. In California, the average citizen has no idea if the cop who answers their 911 call is a career officer, or if he just came from his “real” job as an accountant or musician. Many career cops start as reserves, including my local police chief.

But, reserves are a small fraction of law enforcement. In 2008 there were 765,000 state and local sworn officers (those with powers of arrest), but just 44,000 reservists. By contrast, the U.S. Army’s approximately one million soldiers are roughly equally split between the active duty (full time) and reservists. The wars of the last decade could not have been fought without those reserve components.

By significantly expanding the ranks of reserve officers, I believe we can bring a sea change to America’s relationship with its policing by developing trust and what I call ‘organic external scrutiny.’

Simply put: it’s a lot easier to trust cops when you know them — or are one. And it’s also a lot easier to bring about change. The more cops are in neighborhoods, offices, factories, churches and schools — the more people will relate to them.

“Organic external scrutiny” is the ability of reservists to reliably evaluate crime suppression, tactics and community sensitivities in appropriate balance. As the ranks of reserve officers swell, they will gain influence in the cultures of police agencies. It’s hard to imagine that the Ferguson Police Department would roll out an MRAP to a protest with a neighbor of the protesters behind the wheel – unless it was truly needed.

To be sure, I have seen firsthand that cops can be very flawed. I once went on a ride-along with an officer who made several potentially life-saving arrests during the night. But, he also repeatedly littered from his patrol car, despite having a reporter present. Another time, I spent hours with a female officer who described everyone using a colorful expletive. I could not flee fast enough.

Such behavior would be intolerable with community observation. Thus, if the ranks of police departments largely consist of the community, cops who don’t respect communities won’t be tolerated in those ranks. Reservists’ desire to live through their shifts and protect their neighborhoods will ensure that safe and effective tactics prevail. But they will quickly tire of explaining away inappropriate experiences to friends and co-workers.

This is vastly more effective than the oversight boards that police critics predictably demand. Those boards often feature untrained political appointees who garner little respect. Of the dozens of current and former LAPD officers I’ve known, not one took the pontifications of the LAPD Board of Police Commissioners at all seriously, beyond concerns of their own administrative self-preservation (vice crime suppression).

When people who have to live with all aspects of policies organically shape an agency’s culture, that culture will be fair and balanced.

My LAPD friend was right. Americans are ignorant on topics like probable cause, use of force law and the capabilities of an officer and his equipment. A massive expansion of reserve ranks will provide a meaningful outlet for the frustrations of those who demand change and a retort for those who think such demands are baseless.

None of this will detract from professional law enforcement. Career officers must form the professional foundation of policing and it would be foolish to base staffing decisions on volunteers. Still, the opportunity to increase staffing with minimal cost would provide obvious, practical benefits.

This is not without risk or challenge. The Oakley, Mich. Police Department and the sheriff’s departments in Los Angeles and Orange Counties all proved reserve programs can go awry absent ethical supervision. So can any human endeavor. Many police unions quietly disprove of reserves, in part because no-cost cops give city councils leverage in negotiating compensation with career cops.

But with vision, dedication and a little money, Americans can forge a new relationship with their protectors by becoming them, if only part time. Low-cost, widespread community self-policing is a concept that should appeal to the most ardent civil rights activists, libertarians and fiscal conservatives alike.

If protestors of police tactics really want to change policing, the only way they will accomplish anything is within the realities of safe policing. And who better to do it than themselves?