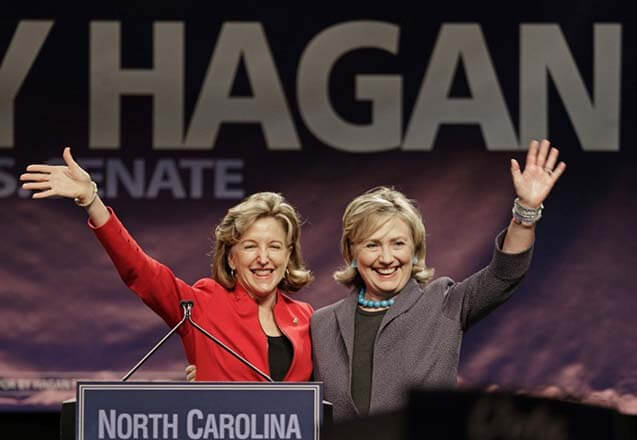 Barack Obama said that he was pretty much done campaigning and that, while he was not on the midterm ballot, every single one of  his policies would be. Republicans, rightfully so, ran with this. Obama is an unpopular President who has failed to live up to his own promises, ones only deities can deliver (receding sea levels, planet healing). He has all but failed to provide the leadership he claimed was so sorely lacking in the country and around the world during George W. Bush’s eight years.

Candidates distanced themselves from Obama, who also distanced himself from them, opting in the closing weeks of the elections to remain largely in the background, campaigning for governors and fundraising in living rooms, closed to the press.

But what is being hailed as a coffin nail in the policies of this disastrous administration was also a coming-out party, a reemergence of the Dems’ great white hope for 2016. This was the official dusting off of candidate Hillary Clinton and her former President house boy. While Barack Obama continued to limp into the midterms and to the end of his presidency, both Clintons were just getting started. Grandma and the Party Boy barnstormed across the country working what their adoring media has trademarked “Clinton Magic”. While Democratic candidates couldn’t afford to be seen with the unpopular President, they were crawling all over themselves to have the former President and the all-but-assured 2016 nominee appear with them.

If Hillary could swoop into campaign stops and hold the US Senate for the Democrats, 2016 and a Bill Clinton third term would be a lock. No arguments.

The Clintons, all too happy to reclaim the party for themselves in preparation for a 2016 coronation, appeared alongside Senate candidates Bruce Braley, Kay Hagan, Mark Udall, Michelle Nunn, Mark Pryor, and Alison Lundergan Grimes (who paid almost $20,000 to personally fly Hillary to Kentucky in the final days of the campaign)

All of them were defeated. 2014 was the official roll out of Hillary 2016 and the Clinton machine. The operation is supposed to be impervious come 2016 — yet it couldn’t swing a single important race for the Democrats.

A rejuvenated and young Republican party sent women, African-Americans, and a gay man to elected office and suddenly Democrats behind Hillary look tired, white, and old. The media, anxious to pivot away from their failed demi-God to their rusty old idol, are left trying to cobble together a narrative in which Hillary is still the answer.

You can bet Elizabeth Warren and Kirsten Gillibrand have been getting desperate phone calls since Tuesday night.

The only choice for network media is to present elder statesman Hillary as the only person who stands in the way of full Republican control of the government in 2016. All of a sudden, the media will be in love with checks and balances. We can’t afford to turn the country back over to the party of George W. Bush, after all.

Hillary herself is going to try to convince the country that the only way forward is to go back 25 years. Right now, it seems that bylined activists are the only people on board with this idea. Just as with Obama, there is a contingent of journalists out there willing to sacrifice any notion of professional credibility for the ability to write “First Woman President” or perhaps even land a position in another historic administration (See Maggie Haberman’s resume-tuning at Politico).

That doesn’t seem to matter much to a restive electorate. The country doesn’t see another historic presidency on the horizon. It sees a tired old woman.

We are a country of shiny new objects. We always have been. The hyper-hashtag culture that dominates our interactions has only accentuated that and it’s not going to wait around for a 70-year-old woman to catch up. Hillary’s plan was to campaign on both the oppression and empowerment of women worldwide by citing how great the policies of her husband 25 years ago were. War on Women. War on Minorities. Gone.

Hillary is right about one thing: We are at the dawn of an age of female empowerment. The only problem for her is that the majority of those women are all newly-elected Republicans.