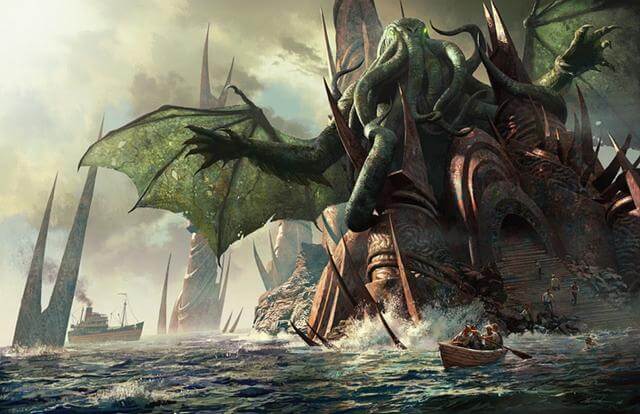 It being Halloween week, we’ve had some fun discussing horror writing and film, from Edgar Allan Poe‘s horror of death to the theological horror of The Exorcist. I enjoy both genres immensely, but I’ve come to a late appreciation for H.P. Lovecraft (1890 -1936), who did as much to shape the genre in the 20th Century as Poe did in the 19th.

Lovecraft lived most of his life in Southern New England, with a short stint in New York City during his brief and profoundly unhappy marriage. Born into relative privilege of a 19th Century sort, he never really earned a living, getting by on his inheritance and the pittance his writing brought in. Introverted and unwilling to promote himself, he died in obscurity of stomach cancer in 1936, his work having never gained any attention outside of pulp magazines.

Like most horror writers, Lovecraft is extraordinarily uneven: many of his stories are incredibly derivative, some of them are outright silly, and there’s strain of racism throughout his work that would be more offensive if it weren’t so transparent, gratuitous, and dated (besides the regular derogatory comments about blacks, Lovecraft can never resist the opportunity to take a jab at the Portuguese). Moreover, Lovecraft’s characterizations are generally very weak — it’s unusual for a character from his stories to make much of an impression — and the number of named women in his work could likely be counted on a single hand.

At his best, however, Lovecraft creates a world of cosmic horror based around the premise that the Universe isn’t about us; that even our deepest, most heartfelt, and most profound struggles are — quite literally — beneath the notice of the true forces of space and time. Truth may set you free in Christianity, but it drives you mad in Lovecraft’s worldview. In the opening to the “The Call of Cthulhu” — his most famous story and, arguably, his best — Lovecraft’s narrator reflects on making just such a discovery:

The most merciful thing in the world, I think, is the inability of the human mind to correlate all its contents. We live on a placid island of ignorance in the midst of black seas of infinity, and it was not meant that we should voyage far. The sciences, each straining in its own direction, have hitherto harmed us little; but some day the piecing together of dissociated knowledge will open up such terrifying vistas of reality, and of our frightful position therein, that we shall either go mad from the revelation or flee from the light into the peace and safety of a new dark age.

In contrast, one of the central conceits of the Abrahamic faiths — and Christianity in particular — is that God cares a great deal about us and that we are the focal point of physical Creation: we are uniquely made in His image; He speaks to us, either through prayer, in person, or through angelic messengers; through our actions the world was irrevocably damaged; through His taking our form and dying on the cross, it was restored, etc. God is subject of the Universe, but we are its object.

But while stories like the “The Call of Cthulhu” feature some knowable and named monster, god, or alien race — all, rather amusingly, with some connection to Massachusetts or Rhode Island — his “The Color Out of Space” features an utterly mysterious killer. The plot is minimal: a mysterious meteor lands in rural Massachusetts and something escapes from it. Within a year, not only has the landscape surrounding the impact site been corrupted and destroyed, so have the lives and sanity of the family who owned the nearby farm.

What makes the story so terrifying — besides the gruesome nature of the deaths — is how inscrutable whatever  got out of the meteor is: not only is its nature mysterious, it’s not even clear whether it has a will. The effects of its presence are consistent with something evil, but its lack of motive or evident gain from its actions are perplexing. It could be torturing intently, but it might just as well be unaware and uninterested in the lives it destroys.

The darkest form of atheism posits that — outside of the noises in our minds — the Universe is silent: there is no Purpose, no Plan, only matter and energy acting upon natural forces. In his fiction, Lovecraft goes further, suggesting that there may well be a cosmic song — only we’re not even part of the chorus, let alone carrying the melody.

Many of Lovecraft’s works are available for free online, and there are multiple free or near-free eBook versions. My first introduction to him was this superb reading of “The Call of Cthulhu.”