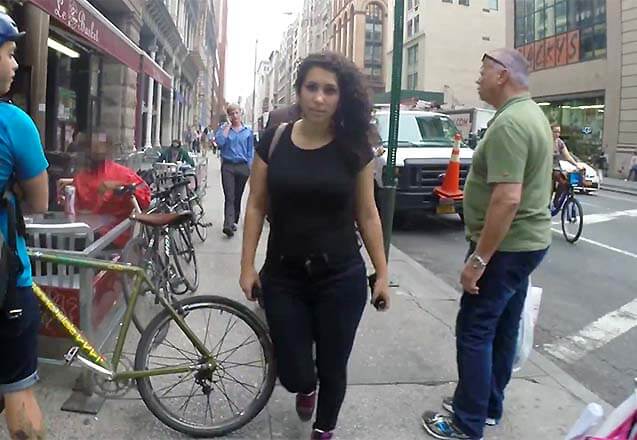 After a brief search on social media, the video was being shared by several flamboyantly contrite men and enraged women. “Wow!  I guess men still don’t get it.” “Men are disgusting animals.” “All you men should be ashamed of yourselves.”

I didn’t have the slightest shame watching the video, nor should any male with whom I associate. We don’t catcall. Of course some guys are boors as are some women. I don’t need a video to prove that human nature is a thing.

In the young woman’s 10-hour stroll through New York City, the video shows 20 incidents of harassment (two per hour), while text at the conclusion alleges more than 100. Some of the behavior is downright creepy while much isn’t disturbing at all.

Apologies to the video editor, but “how you doing today,” “how are you this morning,” and “have a nice evening” hardly count as harassment. If they do, I’m violated by polite tourists, panhandlers, and assertive shopkeepers every time I stroll along a busy city street.

All gentlemen agree that catcalling is a bad thing. In fact patriarchal Victorians were so disgusted by such rudeness, they enforced an elaborate public morality that elevated women with a higher level of respect. Thank goodness feminism and secularism drove a stake through chivalry’s heart.

Today’s Victorianism comes from the left. They too have an elaborate public morality, but one that is untethered to tradition or religion. Their guiding scripture is whatever trendy philosophy is coming out of gender studies departments and mass media in a given month. Men leering at Beyoncé on an awards show is celebrated; similar behavior on the street is anathema.

For better or worse, I’ve never followed fashion. Not only have I never catcalled, I still open doors for women, surrender my seat on public transport, and ensure that I treat them with an extra measure of kindness. I was notified by several liberal men on Twitter that this is A Bad Thing.

You see, it’s good that I oppose catcalling, but bad that I don’t oppose it for the “proper” reasons. While my outward acts of kindness are nice, they arise from a belief that gender differences exist. To these critics, my actions are unimportant; my ideology must be condemned.

Progressivism is about intentions, not results. Nevertheless, I will continue to practice chivalry even though it is unfashionable.