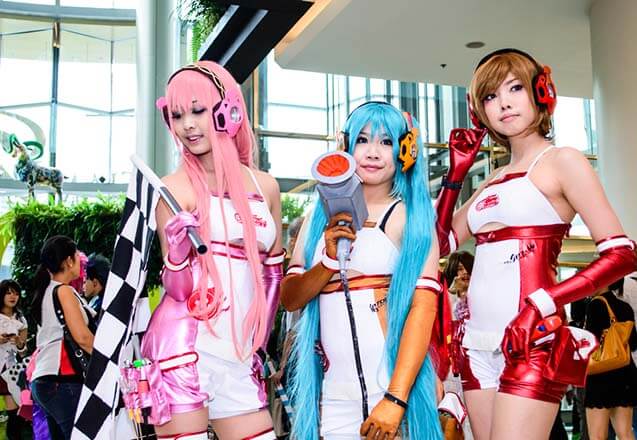 My recent The Week column, “Why the rise of cosplay is a bad sign for the U.S. economy,” may be the most read piece I’ve written strictly for the Internet.

It may also be the most misunderstood. Based on the comments and tweets I’ve received, the most common misunderstanding is that I was arguing that the increase in “costume playing” — primarily based on Japanese anime and manga, as well as similar American media — is somehow responsible for the anemic economic recovery. (Lots of comments by cosplayers about how the money they spend on costumes actually helps the economy or how some even turn their hobby into a small business.)

And for that, I partly blame this io9 story on my column: “Apparently The Economic Downturn Is Cosplayers’ Fault.” Or to be more specific, I blame the io9 headline. The actual piece by Rob Bricken, though hyperbolically and theatrically critical, acknowledges that I am saying just the opposite of the headline. Bricken:

To be fair, despite the headline and subhed that seems to indicate that cosplayers are in fact responsible for the sluggish growth of America’s economy, Pethokoukis states it’s the opposite: “It’s not to say that all or even most cosplay aficionados are struggling to find work. It’s only to say that any rise in people fleeing reality for fantasy suggests problems with our reality.”

Bricken goes on to wonder why I am focusing on cosplay as opposed to other possible diversions:

If our economy is driving people to escape from reality, then perhaps television, movies, sports, books, alcohol, drugs, and videogames might be somewhat more recognizable factors than cosplayers. And if that’s the case, then I also have to wonder if maybe — just maybe — this desire to escape is true of people of all ages who are being f—-d over by the lacks of jobs and job growth, people struggling to find jobs and to hold them, who resent their lack of advancement, or more likely their lack of anything resembling job security.

The reason isn’t because I have something against cosplay. As a comics guy with kids who are into anime and manga, I actually think it’s pretty cool and understand all kinds of people participate for all kinds of reasons. The reason I chose cosplay was because I was making a comparison between the Japanese and American economies. From my column:

Indeed, Japan’s Lost Decades have coincided with a major spike in “people escaping to virtual worlds of games, animation, and costume play,” Masahiro Yamada, a sociology professor at Chuo University in Tokyo, recently told the Financial Times. “Here, even the young and poor can feel as though they are a hero.”

So perhaps, to some degree, the rise in cosplay here — at least more recently — similarly reflects escapism from a depressing economic reality for some cosplayers (not all, of course), particularly 20-somethings facing a depressed labor market. So that’s the theory. Connecting cosplay with escapism doesn’t seem like a huge conjectural leap, as Bricken concedes. Neither does io9′s sister publication Kotaku. From its 2013 piece “Cosplayers Are Passionate, Talented Folks. But There’s A Darker Side To This Community, Too“: “Perhaps not surprisingly, there is also an element of escapism to cosplay.”

Now the Kotaku story wasn’t talking about escape from a bad economy, but it is well known — even commonsensically — that we humans look for diversions during tough times. As the consultancy Euromonitor put it in a 2009 report:

With the global financial crisis hitting home for many, all consumers really want is to do is flee from reality: just as they flocked to see Fred and Ginger movies during the Great Depression, consumers are turning to products and media that take their minds off the daily doom and gloom. This new report examines how leisure trends are changing in the face of recession and ongoing digitalisation, how much consumers are spending and what the impact of these changes will be going forward.

Escapism, then, is perhaps a soft metric that reflects sustained economic weakness. And for some, cosplay serves as economic escapism. And from that perspective, cosplay’s increased popularity is a bad sign for the US economy, as it is for Japan’s — though, on the bright side, at least there is something positive to escape to.
Image credit: Tofudevil / Shutterstock.com