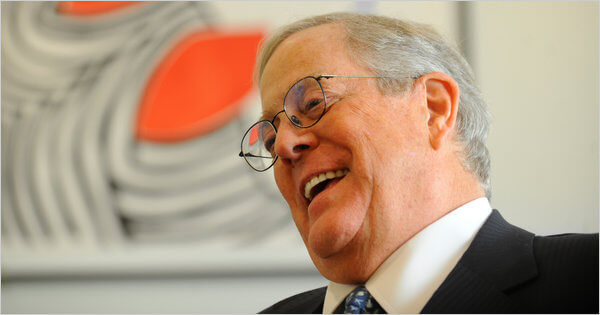 Mr. Koch and his brother Charles, both No. 5 in Forbes’s list of the richest Americans, are targets of liberal activists. David H. Koch became passionate about cancer research after he learned in 1992 that he had prostate cancer.

Mr. Koch, a billionaire who is perhaps best known for his family’s contributions to conservative causes, got a standing ovation from scientists, Nobel laureates and politicians of various political stripes as he opened the new David H. Koch Institute for Integrative Cancer Research at the Massachusetts Institute of Technology, which he gave $100 million to help build. And in a brief, and rare, interview, Mr. Koch, 70, spoke of his hopes for the new center, his prostate cancer and the prank call heard around the world.

Throughout this election cycle the liberal throwbacks have dug into their usual bag of used up and tired old tricks such as the “War on Women” and “Racism” to propel their candidates across the finish line. One such tired topic is the “Koch brothers.” From one ad to the next the Democrats have slammed candidate after candidate, across the country, for associating themselves with the evil Koch Brothers.

If I was a politician running for office, I would turn this in my favor instead of trying to dismiss the spin that the Koch Brothers are evil corporate fat cats trying to sell the country into eternal slavery. How would I do this? Tell the truth. Run an ad over and over again on what the Koch brothers do. Highlight all the industries they help create jobs in and how many people they put to work everyday.