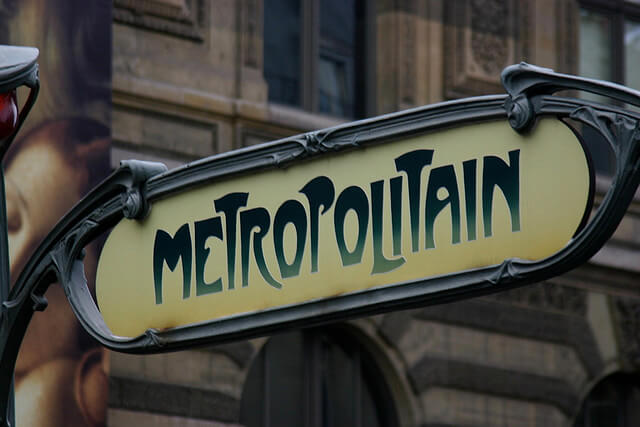 This news item is being discussed so widely in Paris that it even managed to breach my news blackout and my meditative Cone of Silence:

Iraq has “credible” intelligence that Islamic State militants plan to attack subway systems in Paris and the United States, the prime minister said on Thursday, but US. and French officials said they had no evidence to back up his claims.

As in the US, officials here immediately denied having any information about this:

A government source has indicated that the intelligence services “have no evidence at this time that would allow them to confirm” this threat. It’s the same story across the Atlantic, where the National Security Council spokesman has “not confirmed such a plot” and has called for “sharing of information by our Iraqi partners.” [my translation]

Well, what do you do with that?

A story like that breaks, you know you have no clue what’s happening, who’s yanking whose chain or why, or what the intelligence services really know.

But you also know that it’s not pure hysteria to imagine that there are plenty of people in France right now who would love nothing more than to bomb the metro. It’s a big, fat, super-soft, and tempting target. If there’s any security in the metro, it’s certainly not visible to the public: you see a cop down there every now and again, and cameras, but there’s no other sign of police surveillance. By contrast, everyone who takes the Delhi metro has to go through an airport-style security line, put their bags through a scanner, and present themselves for a pat-down. Possibly that’s just useless security theater affording false comfort to the anxious, but — on the face of it — that would make it somewhat more challenging to bring certain kinds of weapons into the system.

France just joined the air campaign against ISIS in Iraq last Friday and is considering extending the strikes to Syria. ISIS responded by calling for terrorist spectaculars in France. We all know ISIS is already here, in France. Security has been visibly stepped up throughout the city. I can see no reason to dismiss the threat as absurd on the face of it. That French and US officials “have no evidence” to back up the claims isn’t all that reassuring. Officials don’t always anticipate terrorist attacks before it’s too late; we know that for sure, and it’s not even reasonable to expect them to. And they may be lying about what they know, too. I’m sure they’ve calculated the economic damage that would result from the public deciding, collectively, to abstain from using public transport for a period of days or weeks or months, and I’m sure they’ve concluded it would be hugely costly; and this when France and the world are struggling to dig themselves out of a catastrophic recession. What’s more, I’m sure they know that if everyone decided to drive, walk, or bike instead of taking the metro, you’d wind up with more deaths in total owing to the mode-of-transport switch, even assuming a mass-casualty terrorist attack: we certainly saw that after September 11.

So we know next-to-nothing about how serious this really is or even how to begin thinking rationally about it. An argument that I don’t find rational, or even an argument, is, “If you don’t take the metro, the terrorists win.” No, no, no, as far as I’m concerned, they win if they kill me. That’s clearly a modest victory for their side. (Claire 0, Terrorists 10,000 | End 4th Qtr.) I always try to avoid being killed by terrorists whenever I can. I believe this is one of the most effective things I can do to fight terrorism.

So, first question: If it could be calculated, what level of risk, would you say, should cause rational people to stop using the metro? The rational side of me says this: the level of risk I should accept is roughly the level of risk I’d accept with any other form of transport. At the most extreme side of the ledger, I regularly get in cars and accept — without much second-guessing — the high risk involved in that. The odds that I’ll die in a car accident in my lifetime are about one in 4,000, although that figure is very rough, because my behavior’s atypical; I do more driving in countries with bad roads, bad cars, and bad road safety practices than most Americans do; on the other hand, I often go for years without regularly getting in a car; I don’t own one in Paris, and rarely even do I get in a taxi. But when I need to get somewhere and the only reasonable way to do it is by driving, I do it without worrying overmuch.

Commercial air travel is so safe that it’s ridiculous to ask oneself if it’s worth the risk. But I’m not asking myself whether I should take Air France to go to my next appointment on the other side of the city, so that’s not the relevant comparison. The other realistic options are walking or biking, both of which I do all the time here, and neither of which are risk-free: I’d warrant that — risk of terrorism apart — it’s much safer to take the metro than to bike in Paris, despite the city’s excellent system of bike paths and considerate drivers.

For the sake of argument, let’s say the rational person should stop taking the metro when he or she concludes that the risk of an individual trip exceeds that of making the trip by car or bike. This is still a tough thing to calculate — if you’re going to do this right, you should also factor in such things as balancing the risk of dying in a bike accident against the lifetime risk of inactivity, and so forth — but this is all sketched-on-the-back-of-a-napkin calculation, anyway. The main thing is that if we knew how high the risk of a terrorist event in the metro really was, we could, in principle, make some kind of rational decision about whether we want to assume it; we know that when it exceeds a given number x, we don’t want to assume it.

Obviously, if I knew for sure there was a 100-percent risk of a major terrorist attack on the St. Michel station of the Paris metro today, I wouldn’t go into that station and neither would you. But a member of the general public who has no access to information beyond what’s reported in the public realm could never confidently conclude that the risk is that high or that specific. Even assuming we accept that there’s an advanced plot to bomb the metro, we have no idea which station or line is at risk, or when the attack might happen. The Paris metro is very big. There are a lot of hours in the day. So already we’re dealing with a very small risk-per-journey, even if we take the attack as a given.

So how does a rational person decide — given such a paucity of knowledge — what the overall risk really is? Or even what ballpark it’s in? What publicly-available information would you take into account when trying to decide whether it might be a better idea to walk? Could you come up with any kind of reasonable decision tree? I’m not looking for gut feelings, here: I’m looking for rational arguments about how to assess and weigh the little hints that have been reported in the news.

How would the people who write actuarial tables approach this question, I wonder?

I think it’s fine to enter into your calculations that we’re enjoying an unusually beautiful autumn here, and the weather is lovely for walking.