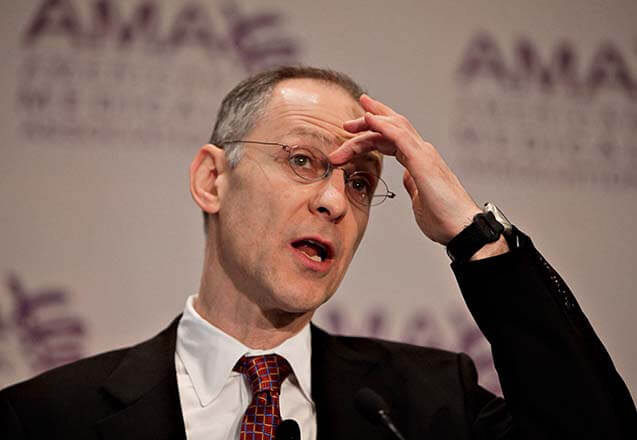 But here is a simple truth that many of us seem to resist: living too long is also a loss. It renders many of us, if not disabled, then faltering and declining, a state that may not be worse than death but is nonetheless deprived. It robs us of our creativity and ability to contribute to work, society, the world. It transforms how people experience us, relate to us, and, most important, remember us. We are no longer remembered as vibrant and engaged but as feeble, ineffectual, even pathetic.

Emanuel, brother to Chicago mayor Rahm and Hollywood super-agent Ari, first gained notoriety as a key target of Sarah Palin. Along with other conservatives, Palin accused Ezekiel of advocating death panels, a charge he bitterly denied, even after the codification of IPAB.

Now that Obamacare is the law of the land, he isn’t as shy about sharing his controversial thoughts on aging Americans. He views geriatric medicine as a way to give “terminally ill people a good, compassionate death,” rather than a way to prolong their lives. “Americans may live longer than their parents, but they are likely to be more incapacitated,” Emanuel says. “Does that sound very desirable? Not to me.”

Stephen Hawking is quite incapacitated, as are many other productive people under 75. Should they too thirst for death, or is attaining that arbitrary age a requirement for self-destruction? As a prominent bioethicist, Emanuel must understand the repercussions of his ideas better than most.

The musings get even creepier with Emanuel’s examples of family members who have outlasted their desirability:

My father illustrates the situation well. About a decade ago, just shy of his 77th birthday, he began having pain in his abdomen. Like every good doctor, he kept denying that it was anything important. But after three weeks with no improvement, he was persuaded to see his physician. He had in fact had a heart attack, which led to a cardiac catheterization and ultimately a bypass. Since then, he has not been the same. Once the prototype of a hyperactive Emanuel, suddenly his walking, his talking, his humor got slower. Today he can swim, read the newspaper, needle his kids on the phone, and still live with my mother in their own house. But everything seems sluggish. Although he didn’t die from the heart attack, no one would say he is living a vibrant life. When he discussed it with me, my father said, “I have slowed down tremendously. That is a fact. I no longer make rounds at the hospital or teach.” Despite this, he also said he was happy.

I dearly hope that the elder Emanuel doesn’t read this article.

[L]iving as long as possible has drawbacks we often won’t admit to ourselves. I will leave aside the very real and oppressive financial and caregiving burdens that many, if not most, adults in the so-called sandwich generation are now experiencing, caught between the care of children and parents. Our living too long places real emotional weights on our progeny…

[P]arents also cast a big shadow for most children. Whether estranged, disengaged, or deeply loving, they set expectations, render judgments, impose their opinions, interfere, and are generally a looming presence for even adult children… And while children can never fully escape this weight even after a parent dies, there is much less pressure to conform to parental expectations and demands after they are gone.

I dearly hope that no one in the Emanuel family reads this article, though it would have been helpful to have this information prior to the Obamacare vote. At least he chose to “leave aside the very real and oppressive financial and caregiving burdens” or that might have induced guilt in those cruel, selfish octogenarians.

Emanuel doesn’t recommend euthanasia. But despite his protestations, the article tacitly argues for Die-If-You-Know-What’s-Best-For-You. After 75, he has determined that you are a burden to yourself, to your loved ones and to society at large. A 76-year-old obviously isn’t in a position to contribute anything useful. Emanuel isn’t ordering you to step on that the outbound ice floe, but when Obamacare 2.0 comes along, who knows?

I visited my 100-year-old grandmother this summer. Though Mr. Emanuel would look down upon her as “feeble, ineffectual, even pathetic,” I look up to her. Her vision is blurred, her hearing weak and her mind tired. But with a firm grasp of my hand and a tender kiss on my cheek she showed that she can contribute something far more important than an article in The Atlantic: Love.