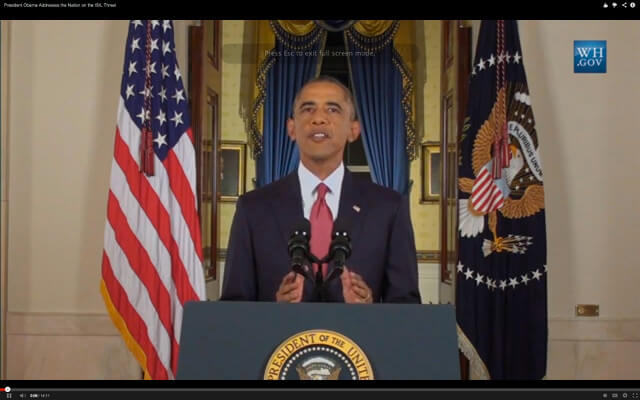 Last night, President Obama announced that American forces would “will degrade, and ultimately destroy, ISIL through a comprehensive and sustained counterterrorism strategy,” largely constituting an air campaign in both Iraq and Syria, and in coordination with the Iraqis and other allies.

What’d you think?  Here’s some quick commentary from Ricochet contributors, and fellow-travelers:

I thought that this was a fine speech, grading against the curve of my expectations. But my expectations were low. The problem for me, and I suspect for others, is that it’s very difficult to see him as anything other than a political creature. It’s obviously the case that he is doing this not because the facts on the ground convinced him he had to do what was necessary to protect America but because the polls and the political climate convinced him he had to plug a hole in the hull of his presidency. I really have no problem with politicians being led by the people, when the people are right. And I think they are here. But I have serious doubts that Obama has any desire to stick it out beyond the moment the American people stop paying attention. I hope I’m wrong.

More coming as it comes in.