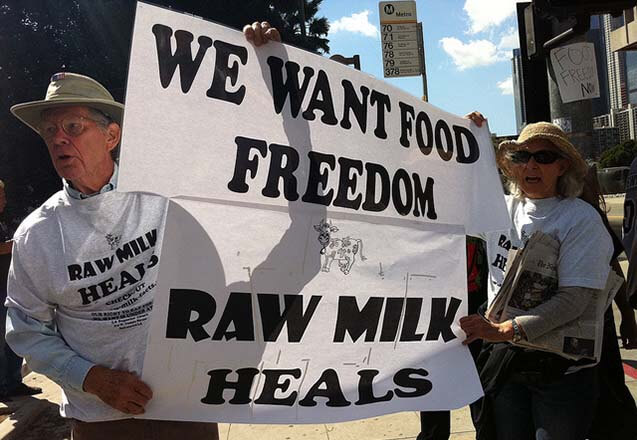 The Virginia conference was organized by the Farm-to-Consumer Legal Defense Fund. The non-profit was created to protect “the rights of the nation’s family farms, artisan food producers, consumers and affiliate communities to engage in direct commerce free of harassment by federal, state and local government interference.” Members get free legal assistance from specialized attorneys, including an emergency hotline for surprise inspections and even raids by federal or local officials.

Speakers at the Food Freedom Fest included libertarian farmer Joel Salatin, Rep. Thomas Massie (R-Ky.) who sponsored two Raw Milk Freedom bills, and John Moody who won protections for farm-to-table buying clubs. “Our event shows how important the issue of food freedom is to everyone across the political spectrum,” said FTCLDF President Pete Kennedy. “From farmer to consumer to politician, this issue affects everyone.”

Like school choice, food freedom is an issue that cuts across political and ideological lines. If a stranger walked through the convention, he would probably notice more of a “hippie” vibe than anything that smacked of Republican politics. The movement naturally sides against crony capitalism since it is so focused on small businesses and producers.

The attendees were people from widely varying backgrounds who just want to be left alone. Not to accumulate riches or win a political fight, but so they can eat and drink what they think is healthy and delicious — for them and their families. If conservative politicos want to expand their base, they would be wise to listen carefully to this growing movement’s concerns.