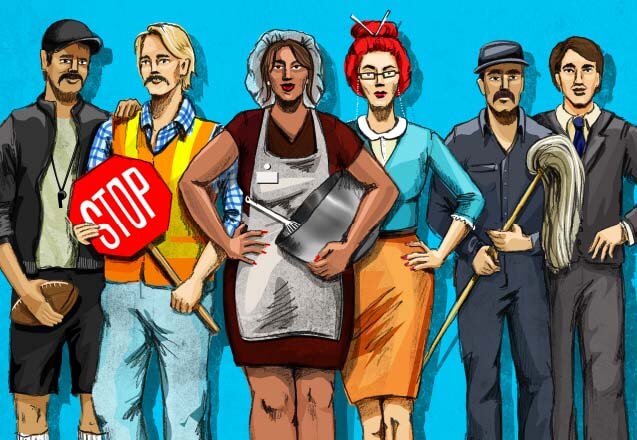 A new study shows that the number of non-teachers on U.S. school payrolls has soared. Since 1970, non-teaching staff grew by 130%, while the number of teachers only grew 54%. Over that same time period, student enrollment increased by a mere 8.6%.

The report, produced by the Thomas B. Fordham Institute, shines a light on that forgotten group of public education professionals they call “the Hidden Half.” The title reveals a little-known truth: 50% of all staff employed by school districts aren’t even teachers.

Fordham’s findings reinforce previous studies. In 2012, the Friedman Foundation for Education Choice found that since 1950, U.S. public schools have increased their non-teaching positions by a shocking 702%.

While public schools in big cities are often singled out for criticism, Fordham discovered that the main culprits in this administrative explosion are rural districts. Cities average about 57 non-teaching staff for every 1,000 students. Meanwhile, rural areas have about 74 non-teachers for every 1,000 kids. Rural school districts also are increasing their support staff at a faster rate than their metropolitan counterparts.

The U.S. spends much more on non-teaching staff than every developed country outside of Denmark. This includes nations often presented as our educational superiors, such as Finland, Korea and Austria.

How is this growth necessary and how can it possibly be sustainable? Fordham’s Chester Finn breaks down the findings:

Our sense is that these millions of people have quietly accumulated over the years as districts simply added employees in response to sundry needs, demands, and pressures—including state and federal mandates and funding streams—without carefully examining the decisions they were making or considering possible tradeoffs and alternatives. This was the path of least resistance and, at a time of rising budgets, was viable even if imprudent.

But it’s no longer sustainable in the public sector any more than the private. Observe how private firms go about reducing costs, boosting productivity, enhancing organizational efficiency, and increasing profitability: they almost always start with staffing. The Pentagon is putting itself through similar self-scrutiny. So is the U.S. Postal Service.

One could list plenty more examples. Changing staff—and staff-related budgets—is never easy, especially in the public sector, due to politics, contracts, and civil-service rules. But that’s what leaders are for: to overcome obliviousness, work through politics, catalyze rethinking, and rearrange practices that no longer deliver the required results at an affordable cost.

This growth will continue until politicians and school administrators are challenged. Voters should refuse new spending until this growth in unnecessary staffing is stopped and reversed.