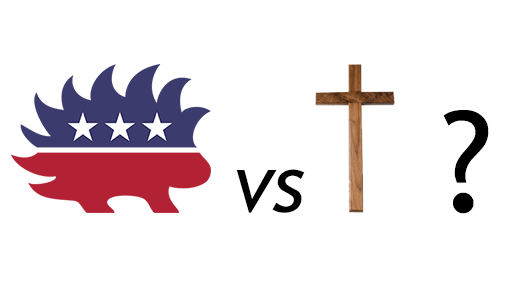 Religion is, of course, a large component of the conservative movement, but philosophically it is not a necessary component of a thoroughly conservative position.  Not even for marriage.  I view the partnership between religion and conservatism as a co-development from a common origin.  Shared predicates yield shared conclusions, and therefore common interest.  Where religion ascribes things to God, secular conservatism agrees to the extent that it is destructive of society and the individual for mankind to mess with certain things.  Progressivism on the other hand is the confidence that a small group of people in the present know better than (on the one hand) everybody else across time, and better than (on the Other hand) God in His infinite wisdom.  Secular conservatism and religion get along just fine as defenders of our culture.

I see value in describing much of libertarianism as allied with progressivism, because conservatism is where the middle is, and to pull us off that mark either this way or that is just as destructive.  If a movement seeks to abolish our traditions as proven over time, it is not conservatism.  Progressivism and libertarianism get along just fine as disruptors of our culture.

There is already a philosophical position consistent with conservatism which enshrines human rights and the liberty of the individual: it is called conservatism.

Now, not every tradition is valuable, and a slavish devotion to traditions which are not good is not conservatism; that’s mechanism, on the process level.  Radical opposition to a flawed and failing government is not anti-conservative, but radical opposition to the institutions of our culture, most definitely is.

For example, you could argue that big spending by government is now a tradition and that it is therefore conservative to defend it and radical to oppose it, but this is wrong for a number of reasons.  First, it may be a tradition, but empirically it has not been proven to be a useful one.  Some spending is necessary, some spending is excessive — making judgements is important, and at any rate, even if all projects were equally worthy, the sheer sum of spending which displaces other worthy but non-government projects must be taken into account and weighed for relative merit.  Big spending is anti-conservative because it is destructive.

Second, the dependencies come to play in that objects and policies are not the only subjects to be appreciated and defended.  The decision to spend less is no less valuable than the process by which we arrive at that decision, and its implications.  If we feel that the accumulated wisdom vouchsafed in our culture is probably more valuable as a guide for society (in the aggregate) than the intellect spawned in a few brilliant fellows, then a process which lends itself to operation gently over time by many rather than abruptly, once, by the few is an inherently conservative method of arriving at conclusions.  Big spending is anti-conservative because it operates through an anti-conservative process.

Marriage pre-dates any law.  It simply is, and it is between one man and one woman.  This may sound circular, or like a “no true Scot” defense, but I assert it as a foundational fact.   Marriage is not produced by law any more than our rights are.  Marriage is enshrined and defended by law in our culture, and if the law should fall, marriage would remain, just as our rights do.  The law does not trump marriage.

Humans are sexual beings (as our grade-schoolers are reminded every minute by government busybodies), and many of our impulses and reactions are not rational in the way we would like, no matter how logical they may be from a chromosome’s point of view.  As manners are typically maintained by society itself, morality is often maintained by religion as a specific example of a philosophy operating in context.

As the male-female pairing is not up for debate in conservatism (I challenge you to convince me that it is not what has been proven to work), so the societal adaptation which defends it is a necessary component of conservatism.  I realize that many “conservatives” disagree with this, but they are mistaken about either their conservatism or their conclusions.