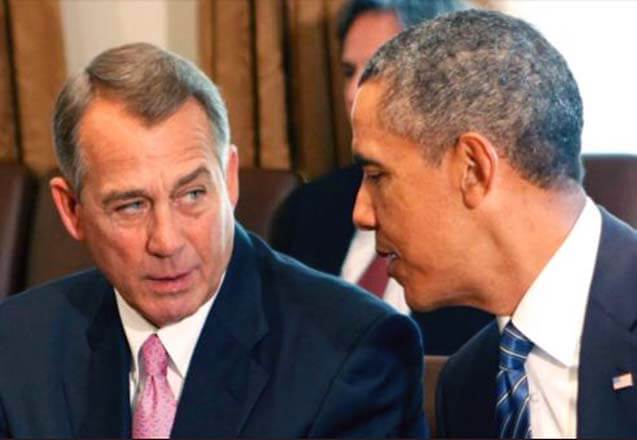 Right now the hottest story coming out of Washington, D.C. does not involve the end-of-term Supreme Court decisions. Rather the media attention is turning rightly to the audacious lawsuit the House Speaker is cooking up against President Barack Obama. I have not seen the complaint that is being drafted on behalf of the House of Representatives and its Bipartisan Legal Advisory Group, by veteran litigator David Rivkin and law professor Elizabeth Foley, so any immediate judgment has to be treated as tentative at best. Nonetheless there is enough grist for the mill to ask whether this lawsuit will do any better than an ice cube exposed to the relentless summer sun.

A Political Question? My initial reaction was that this lawsuit has to be dead on arrival. There is a long tradition under which power struggles between the different branches of government are deemed to be “political questions,” which are, almost by definition, to be resolved by the political branches themselves through the messy processes of bluff and negotiation. So why is it that this process does not apply in this particular case, when it is so obvious that deep political divisions rule the day on such key issues as Obamacare, drugs and immigration, among other topics. No doubt that is the position of the administration’s speakers who regard this lawsuit, much as Carl van Clausewitz, who famously wrote:

War is not merely an act of policy but a true political instrument, a continuation of political intercourse carried on with other means. What remains peculiar to war is simply the peculiar nature of its means.

Much the same can be said of litigation, which is a continuation of politics, albeit by peculiar means. But is this reaction correct. Here the answer is, I think, more troublesome than one might think.

Let me start by referring to two cases, one of ancient vintage and the other hot off the presses today. In the first of these decisions, Baker v. Carr, the question was whether the Supreme Court could invoke constitutional principles in order to break the Tennessee log jam created under a 1901 state law that virtually assured rural citizens a stranglehold on state electoral politics. Clearly no issue could be more sensitive than this one, and yet Justice Brennan, after giving full weight to the political question doctrine, held that the Equal Protection attack against this systematic form of vote dilution was nonetheless maintainable.

The point of his opinion was that the courts could interfere to see that appropriate processes are maintained, and can do so on structural reasons alone. The upshot is that Brennan was utterly indifferent to the relative merits of the legislation churned out under the preexisting system. He was concerned instead with the manifest injustice that arose from stacking the political process in ways that favored incumbents who had managed to entrench themselves under state law. A decision that had intense political consequences was therefore not caught in the clutches of the political question doctrine.

The more recent decision is today’s decision on recess appointments in National Labor Relations Board v. Noel Canning which unanimously held that the President exceeded his powers when he sought to make key recess appointments to the NLRB. To be sure, there were both broad and narrow approaches to the case, with the narrow approach prevailing when Justice Kennedy joined the reliably liberal block. But for these purposes, the key point is that neither side argued that the political question doctrine forbade the court from wading into an interbranch dispute with profound political consequences.

So what is the situation here? The argument of Boehner is that the list of “shalls” that the President ignores upset the basic balance of government, by refusing to take care to see that the law is “faithfully” executed. He is willing to make that argument on structural grounds only, in order to persuade the liberals that they can side with him even if on the merits they agree with the President on Obamacare or immigration reform. There are of course some implicit qualifications to the word “shall” which may well allow for limited exceptions. Indeed I have argued on Ricochet that the President should be cut some slack in making decisions to postpone the overall implementation of laws that cannot be sensibly implemented, even without the aid of Congress.

But this is a limited exception. It applies only to cases where the entire provision is postponed. It would never allow for selective refusals to enforce particular provisions of an integrated law, and it certainly would never allow for a decision to back of enforcing laws that have been enforced for many years, as is the case with Obama’s immigration decisions. The key point here is the President is wrong in so many cases and in so many ways, even if we give a generous reading as to the scope of his powers.

So what reason is there not to allow this suit to go forward if there are manifest and persistent decisions by the President not to faithfully execute the law? It is always possible to say that the House, or the House Speaker, the Republicans, or the Bipartisan Legal Advisory Group don’t have standing. There is certainly much (misguided law) that insists that pocketbook and discrete injuries are needed for standing. As I have long argued, however, this is a huge conceptual mistake. The judicial power as set out in Article III extends to “all cases in law and equity,” and one office of equity is to allow the injunction of actions that are ultra vires. That is the way in which matters work with corporations and with charitable associations, and it should work here as well. If so, then any citizen should be able to maintain this attack, after which the courts should consolidate the cases. Current law will not allow for this clean conclusion, so it is uncertain how matters will play out. But whatever the ultimate outcome, this lawsuit presents very serious issues. And even if the litigation fails, it should shine a bright line on the President’s serious dereliction of his constitutional duties.