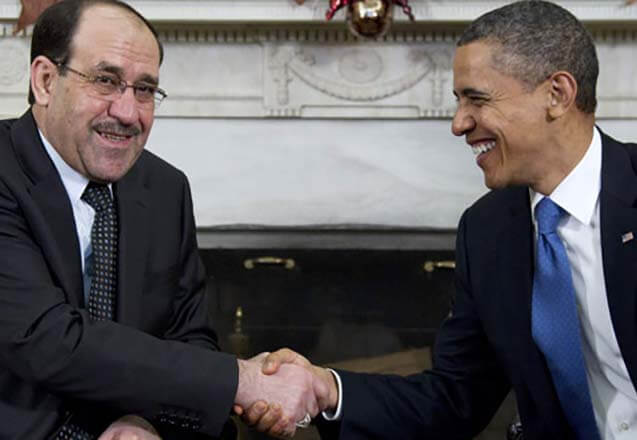 I’m thankful that Obama is belatedly paying attention to the crisis he helped foment by his failure to enact a status of forces agreement. Nevertheless, his paeans to national unity and scolding of Iraq’s political leaders are hard to take seriously. Here’s what he said in front of Marine One on June 13:

Unfortunately, Iraq’s leaders have been unable to overcome too often the mistrust and sectarian differences that have long been simmering there, and that’s created vulnerabilities within the Iraqi government as well as their security forces.

So any action that we may take to provide assistance to Iraqi security forces has to be joined by a serious and sincere effort by Iraq’s leaders to set aside sectarian differences, to promote stability, and account for the legitimate interests of all of Iraq’s communities, and to continue to build the capacity of an effective security force…

So this should be a wake-up call. Iraq’s leaders have to demonstrate a willingness to make hard decisions and compromises on behalf of the Iraqi people in order to bring the country together. In that effort, they will have the support of the United States and our friends and our allies.

Obama offered similar advice in today’s presser. I quoted it above, but made two slight edits: Iraq was recast as America and “sectarian” was changed to “ideological.”

When will the President take his own advice? Shouldn’t Obama, along with Harry Reid and John Boehner, “overcome the mistrust and [ideological] differences that have long been simmering” in the U.S? Is it time for America’s leaders to “set aside” philosophical differences, to “promote stability, and account for the legitimate interests” of all of America’s communities? When will our leaders “demonstrate a willingness to make hard decisions and compromises” on behalf of the American people in order to “bring the country together?”

The United States is $17.5 trillion in debt with a social safety net collapsing under its own weight. We cannot control our borders, fix our broken healthcare system, or even build a simple pipeline. Our military is being hollowed out, our space fleet has been grounded, and our education system is ranked well below Slovenia, Iceland and Vietnam. Meanwhile, Obama is focused like a laser on the local football team’s name, machines that bake Obama-faced pancakes, and ensuring we have enough cakes for gay weddings.

Perhaps other world leaders will set aside their partisan divisions as soon as Obama does. I wouldn’t bet on either.